I would appreciate your help with this (naive) question of mine.

I would also appreciate any related reference on the subject.

Producing an output of algebraic constraints from a data set involves several concepts.

Let $mathcal{S}$ represent the above set of inequalities, let $I$ represent the number of points in the input data set for which a proper boundary surface is sought, and let $V(mathcal{S})$ represent the volume of space contained by the bounds in the appropriately dimensioned $mathbb{R}$ space.

Searches of this type unavoidably get into the notion of over-fitting, simply learning the data by memorizing it in exhaustive detail. In this case that would be a set of inequalities that narrow the bounds of the system to exactly the set of $I$ points in the input. That is obviously not the solution sought.

Examples of under-fitting might be a multidimensional bounding box or ellipsoid. The simple case given in the question is probably an under-fit since a set of data points that fit nicely into a torus but represented as fitting into a ball is probably not the solution sought either.

Balance Between Complexity and Triviality

The question is searching for a mechanism that searches for a balance between these.

An Approach Likely to be Substantially Effective

The assembly of several research deliverables will position the project nicely for a highly effective (and possibly highly coveted) result.

Most directed graph libraries provide a solid base to represent the variables, operators on them, the left and right hand sides of the inequalities, and the set of inequalities as a whole. Search for graph library along with the programming language of your choice.

A reasonably quick convergence on a properly balanced model of the bounds of the data cannot occur if the Markov property is assumed. Remembering what mutations of the inequality set are already tested is essential to avoid replication. Actions (mutations in this case) cannot lead to states (inequality set in this case) that have been tested. By tested, in this case, is meant that the point density, outlier range, and balance criteria have been evaluated and the value of the permutation of possibilities can be stored.

Although this problem differs from the use of DQN application for chess and go, some of the search pruning and application of basic feed forward (multilayer perceptron) networks to self-teach based on generated examples may be very applicable. The fields of bioinformatics and robotic control of defense countermeasures are the most related fields of study, and there may be some public exposure of that work. It is a major project to read through all that material to find something that can be adjusted to this project.

What is clearly applicable is training data generation. Once the system for holding the inequalities are formed, it should be straightforward to create artificially generated instances of $mathcal{S}$ and then use the above generation strategy to produce $I$ input points to go with the label, which will be $mathcal{S}$.

This is one of those projects that, if done well, may cost much in effort but return much in fame, fortune, and (more importantly) pure thrill of furthering the frontier of knowledge.

Answered by Douglas Daseeco on November 18, 2020 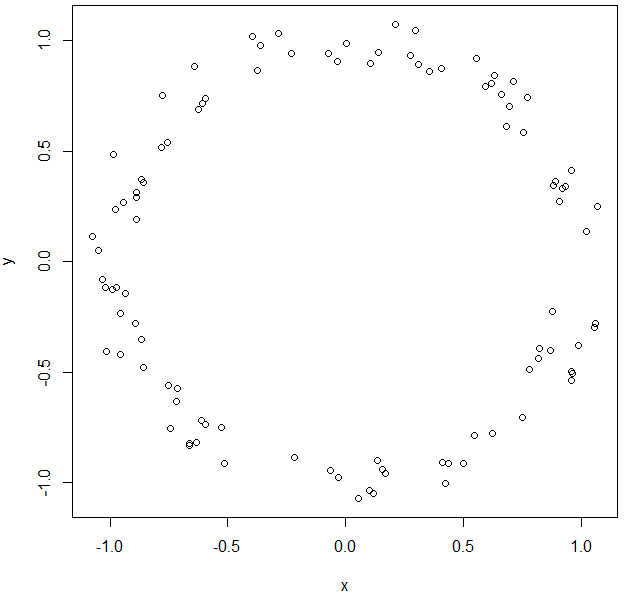 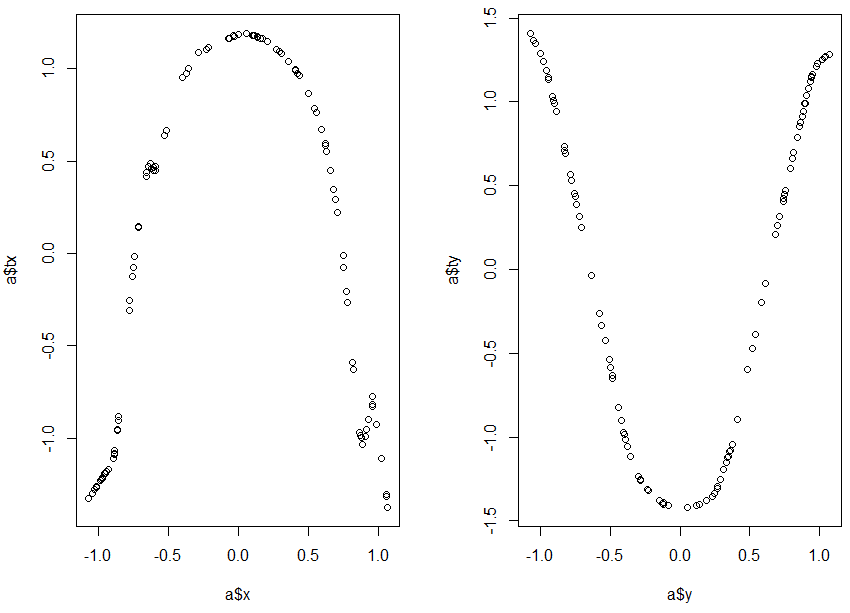 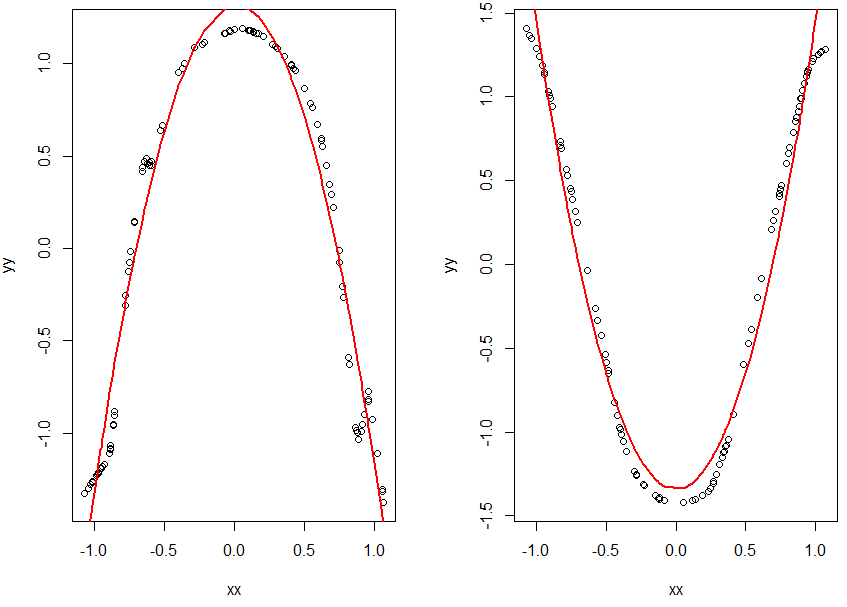 The red parabolas don't go through the transforms exactly but we don't need it. We use them only as hints to find the exact relations. We can tweak the parameters later. The parameters of our approximate fits are

Answered by Vladislav Gladkikh on November 18, 2020

I'm assuming the question intends to find the maximally constraining bounding relation from among a large variety of other possible relations.

The bounding relation is likely linked to the chaos idea of attractors$^1$. Some contemporary visualizations of attractors in phase space are visualized as bounds rather than translucent paths or cross-sectional means.

The simple form used as an example, the circle, never actually exist in nature. It is an approximation of a differential equation for an orbit with a eccentricity of zero in three space projected onto a parallel plane. But even if this problem is restricted to $mathbb{R}^2$, the concepts of attractors may pertain.

If quadratic or cubic approximation is adequate for your purposes then it is a matter of finding the zero terms in the generalization. To find non-polynomial relations, the differential equations are the first things to find, but there may be no equivalent closed form in algebra

Why can we perform graph convolution using the standard 2d convolution with $1 times Gamma$ kernels?

How to evaluate the performance of an autoencoder trained on image data?

Is there an optimal way to split the text into small parts when working with co-reference resolution?

How to properly optimize shared network between actor and critic?

Which is a better form of regularization: lasso (L1) or ridge (L2)?

What is meant by “arranging the final features of CNN in a grid” and how to do it?

How are training hyperparameters determined for large models?

How can I have the same input and output shape in an auto-encoder?

Which neural network should I use to distinguish between different types of defects?

How could I use machine learning to detect text and non-text regions in scanned documents?

Using convnet to classify language of text contained in images

Why does my “entropy generation” RNN do so badly?

What is meant by gene, chromosome, population in genetic algorithm in terms of feature selection?