I’m currently trying to find a particular methodology with which I can texture the environments in a computer game (stay with me here!). I’m drawn to the clean, low-frequency detailing from a game published in 1995, Delphine’s Fade to Black (have skipped to the start of the game here). On the PC this game mixed gouraud-shaded polygons for objects and characters with stark, low-resolution textures for most of the game.

I’ve always been attracted to low-poly art in CG, and precisionist art in traditional mediums, as seen in the following examples… 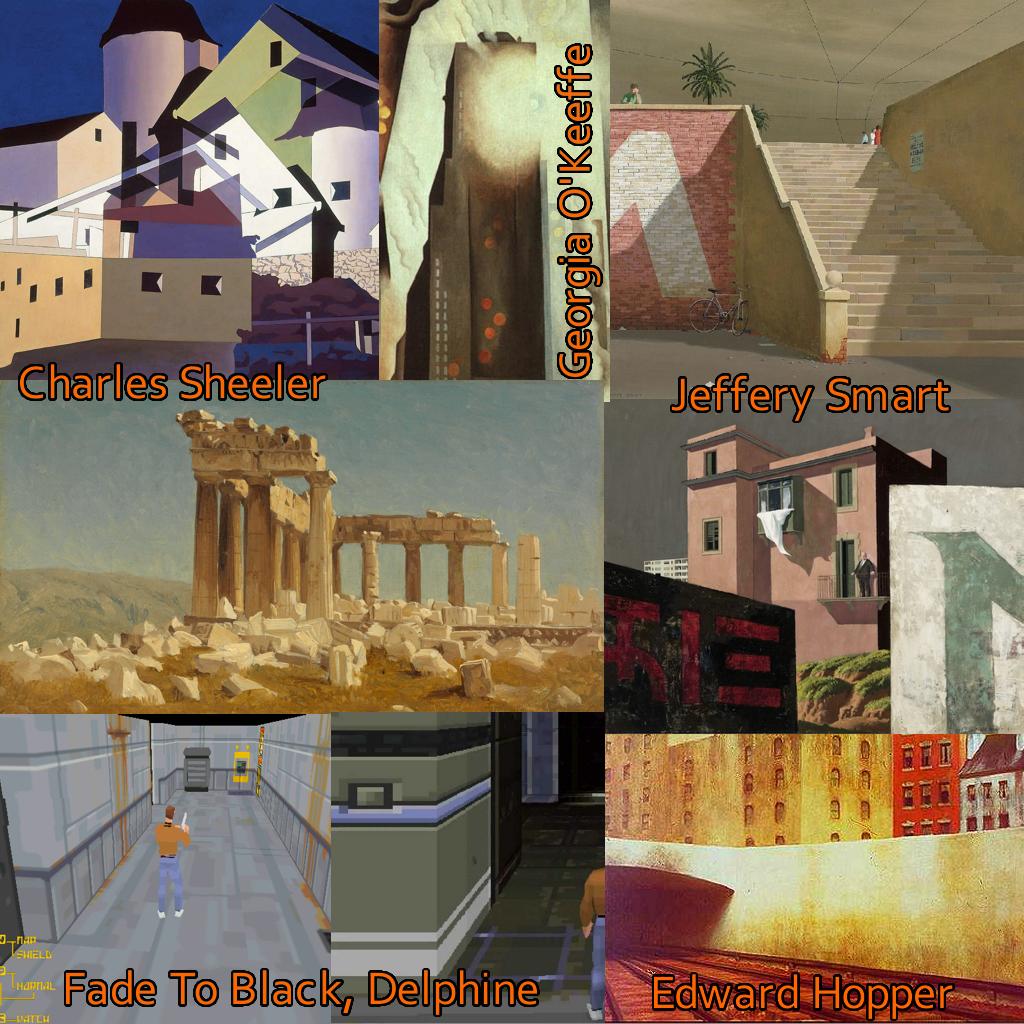 Note – hard shadows, distinct blocks of colour with gradients. There are a few games which have borrowed from this style – Ico, Team Fortress 2, Rime (among others) and I think it might work for the game I currently have in mind.

That said – the Fade to Black wall texturing seems to my eyes (despite being a low-res texture map) a little more impressionistic/abstract than Sheeler, Smart et al. Details and folds are hinted at with a simple block of dark green, rust is implied with a couple dabs of brown. In fact, there’s a touch of the screaming pope to it, to my eyes: 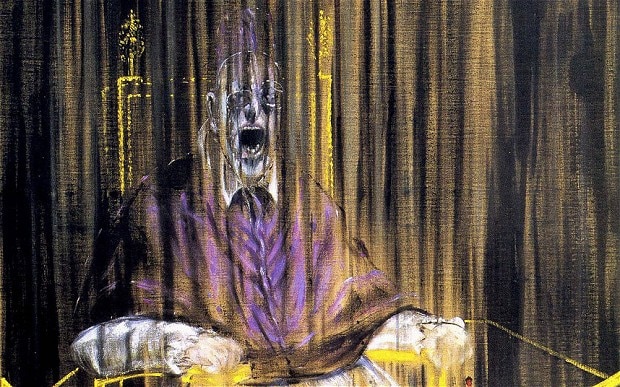 Obviously Bacon’s work is way more detailed and frantic, but I can’t help but think that the impressionistic, low frequency detail of the Fade To Black environment texturing has more in common with Bacon than the totally cool, remote Sheeler.

So my question is: Does anybody know of a particular style of art which combines precisionism with elements of impressionism, daubs of paint, implying detail etc.? Does anybody have any examples of this that I could investigate?

In truth, I’m a bit of a traditional art ignoramus, but I think this might be useful research for my project.

Interesting question. As Wiljago has commented De Chirico is a good fit however I'll add that what unites the examples you've given are not stylistic (formal) similarities but atmospheric.

Your examples do mainly feature the flat clean (low poly)geometric forms or surfaces you favour but other factors are far more emotionally evocative. Open, empty public spaces, decaying grandeur, isolated figures in stark urban environments all bathed in low raking evening light (long defined shadows). Francis Bacon is notable because while he recognised and strove for a starkness in his work, he also wanted to subvert it with increasingly random marks and splatters.

Given that you are working towards an art style for a game I'd suggest you also check out the architect Louis Kahn whose clean minimal grandeur might tie in nicely with the mood you're after. If you address nothing else but the evening lighting (notably absent from "Fade to Black") however I think you will achieve the atmosphere that unites your sources.

What you're talking about isn't just one style or school, but it sounds like you may like works coming from: scuola metafisica, surrealism, American modernism, American realism, expressionism, and symbolism.

Now, as I said, the characteristics you described don't define any school of fine art in particular, so within those schools there will be works that do and don't fit what you're looking for.

What’s the name of this cartoon style?

Why are parallel lines in the real world not drawn parallel as they head to the vanishing point?

Am I going about learning to draw the wrong way?

What papers are suitable for markers?

How to ferment green indigo powder to make it blue

My sewing machine is accelerating for an unknown reason

Can I use polycrylic over a fixative?

confused about varieties of linseed oil

What can I use to cover raised mosaic edges?

What are the different pencil/pen holding techniques for drawing? Which should be followed in which case?

How to draw human body in chest/collarbone area?

Help on trying to achieve a specific type of shading

Do reference photos have to be the same size as my final drawing?

Muslin as a curtain with the option to remove hooks

What tool or technique is best for cutting circles in matte board?