Why are parallel lines in the real world not drawn parallel as they head to the vanishing point?

I’m working through Perspective Made Easy, and the introductory section about parallel lines has thrown me, specifically pages 23 through 25. The diagrams are especially confusing to me; for example, on page 24 it says: "As he raises his eyes and looks fifty feet in front of him he sees the same width of tracks but within a much narrower area", but the cone of his vision is not narrower, merely stretched longer: 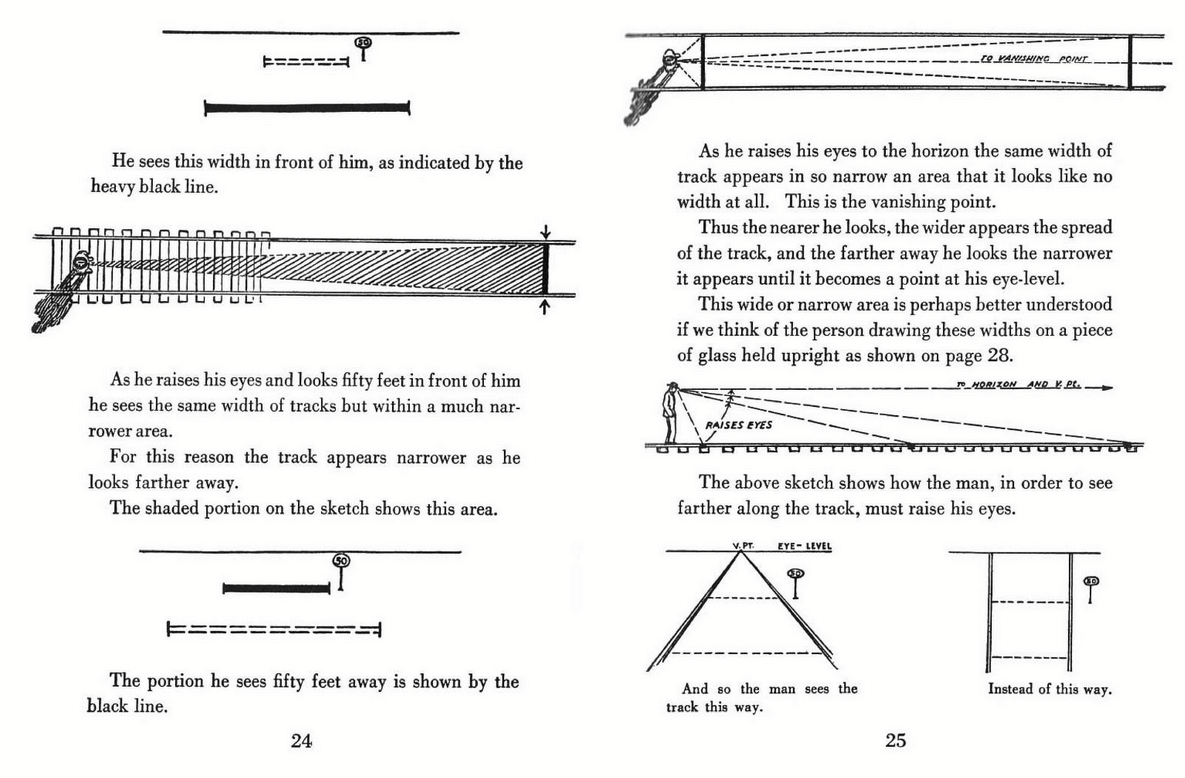 Based on the description, I would either expect the man’s vision to be far broader than the tracks (especially so for the more distance piece), or perhaps the distant piece of track narrower than the closer piece (although, physically speaking, we know this isn’t the case).

I’ve obviously observed the phenomenon of scale being affected by distance in real life, but I’m trying to articulate the rules behind this so I can understand and implement them better in art practice, and diagrams/phrasing such as the above are confusing me more than they are helping. Can someone rephrase this or draw up a better illustration? It’s left me even more confused about perspective than my default instincts, so I’d really appreciate the clarification.

I will preface my response with a cautionary warning that I am an engineer by profession, so I am somewhat naturally inclined to use optics/physics and math to illustrate my point. Hopefully I'm enough of an artist to actually be able to illustrate this sufficiently well. Now, onwards!

A person's field of vision can be described as the "cone" radiating out away from your face that describes the area you see as you look straight away from you, with the tip at your face and the cone expanding wider as you look farther away - that is, the farther away you look, the wider your horizontal field of view. (So you are correct here - the person's field of view is much wider than it appears in the book's diagram. Those lines extending from their head should continue beyond the tracks.) 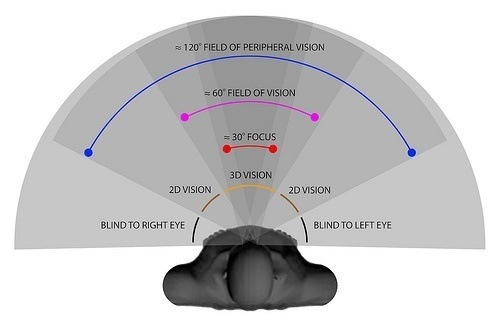 For reference, I read up on some of the answers to a similar question that was asked on the Physics StackExchange. Basically, as the railroad tracks lead away from you, the width of the tracks take up a smaller portion of your field of view, which creates the impression that the space between the tracks becomes smaller as it moves away from you. At the farthest point that you can see, the tracks take up such a small portion of your field of view that they appear to converge into a single point.

To illustrate this a little more, I have provided a simple diagram and some calculations below. 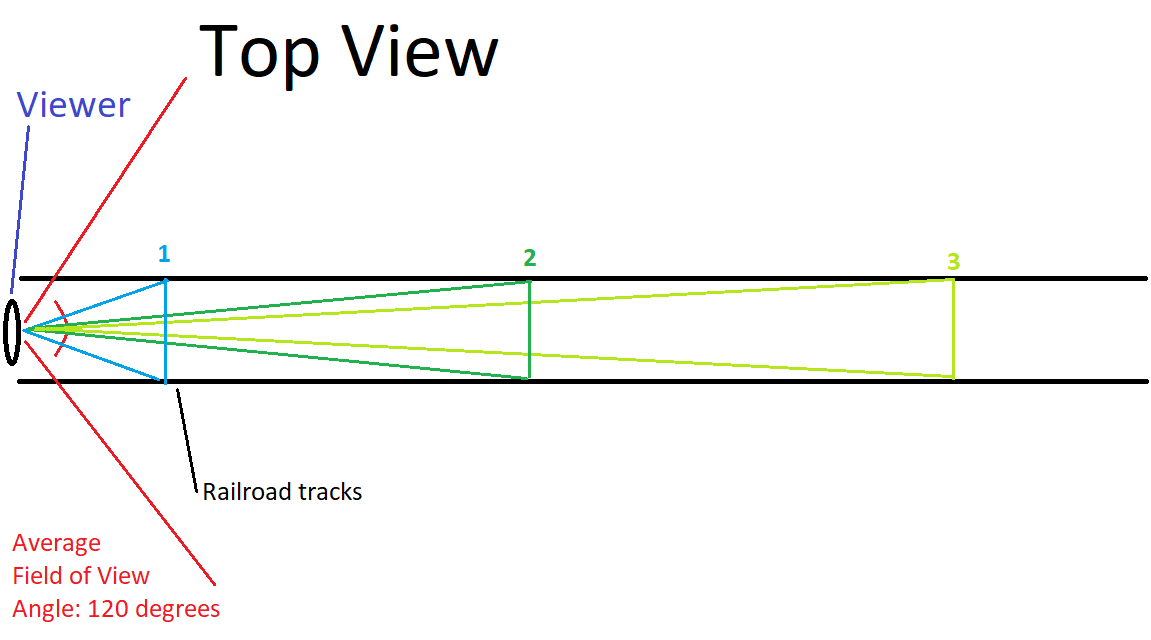 (Source: My own skills in MS Paint.)

The black parallel tracks are the railroad tracks. On the left is the viewer (you), represented by a squashed oval, who is looking down the tracks. Your field of vision is illustrated by the red lines, which create an approximately 120-degree angle, beginning at the viewer and extending outward. 120 degrees was wider than I had anticipated, so you'll have to imagine the lines extending beyond the image.

Using some basic geometry, we can calculate the width of your field of vision at different distances away from you. The standard gauge (width between the rails) of a US railroad track is 4 ft 8.5 in (source)- I'll round this to 5 ft to simplify the calculations.

Let's say Point 1 (light blue) is 7 ft away from you. Using some trigonometry, we can approximate the width of your field of view at 7ft away. One half of the triangle forming your field of view is, quite conveniently, a 30-60-90 right triangle, as shown below. 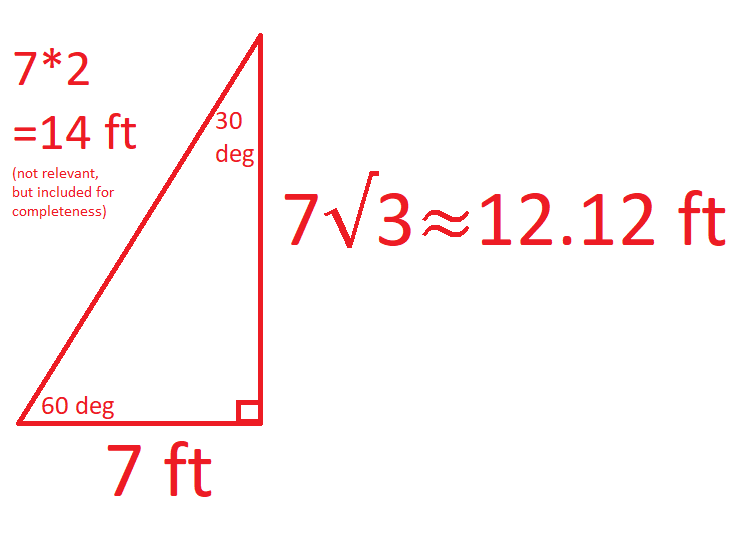 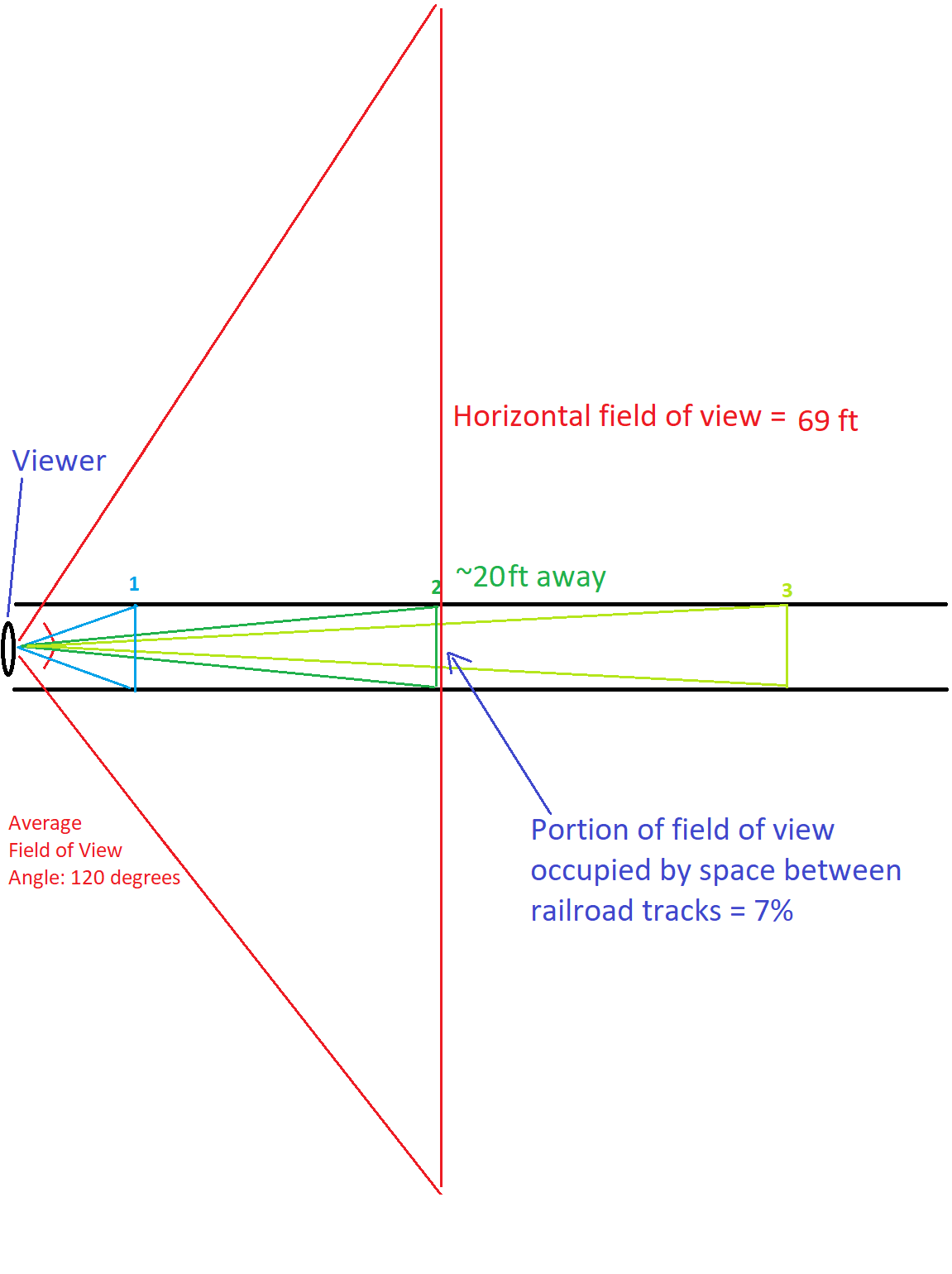 Due to the Earth's curvature, the railroad tracks will eventually disappear over the horizon. Assuming you're an average-sized human, you can see about 3 miles (15,840 ft) away until something vanishes over the edge of the horizon (source). At this distance, your horizontal field of vision is now a whopping 2 x 15840 x sqrt(3) = 54,871 ft. At the horizon, the 5-ft space between the rails has now shrunk to only 0.0097% of your horizontal field of vision.

So... are your eyes sharp enough to still see that gap?

For the average person, the angular resolution of the eye is approximately 1 arcminute, which means humans can distinguish things that are 30 cm apart at 1 km away. If we scale this to the width of the railroad tracks (4 ft 8.5 in, or 56.5 inches), you won't be able to see the space between them after about 5400 yards, or 3.07 miles. Which, quite coincidentally, is almost exactly the distance to the visible horizon.

Is there a name for an orange, gray and white -style pattern?

What is the name of this drawing style?

Is there a name for this style and/or “subject matter” of art?

What is the name of this black lines only oriental drawing style?

What’s the term for the opposite drawing style to hyperrealism?

What art style does this black and white work represent?

How to describe this style of pencil art?

How can I describe this alien-looking sculpture art style / concept to find other examples?

What name best describes this style of pen-and-ink art?

It is easier to learn to use oil paint or acrylic paint?

How do I replicate this misty spray paint texture/pattern?

What is the best method of hanging canvas on a wall to work on?

Replenish the ink of a fountain pen by dipping

Can white gesso be diluted to make it translucent?

How to tell a story through pencil drawings?