How do I get a single file that is 22GB onto a MS-DOS FAT 30GB memory stick?

A commenter has suggested that a MS-DOS FAT memory stick has a limit of 4GB for each file. I have a 22GB file that when moved or saved to the stick says it is ‘too large for the format’ of my 30GB memory stick. I’ve used the Disk Utility to help reformat/clean the memory stick (which is new by the way).

What else do you suggest please?

You can format the memory stick as ExFAT. Go to Disk Utility, click the Erase button, and select the Format as ExFAT. ExFAT supports much larger file size and you'd be easily able to copy 22GB file on a ExFAT formatted filesystem. 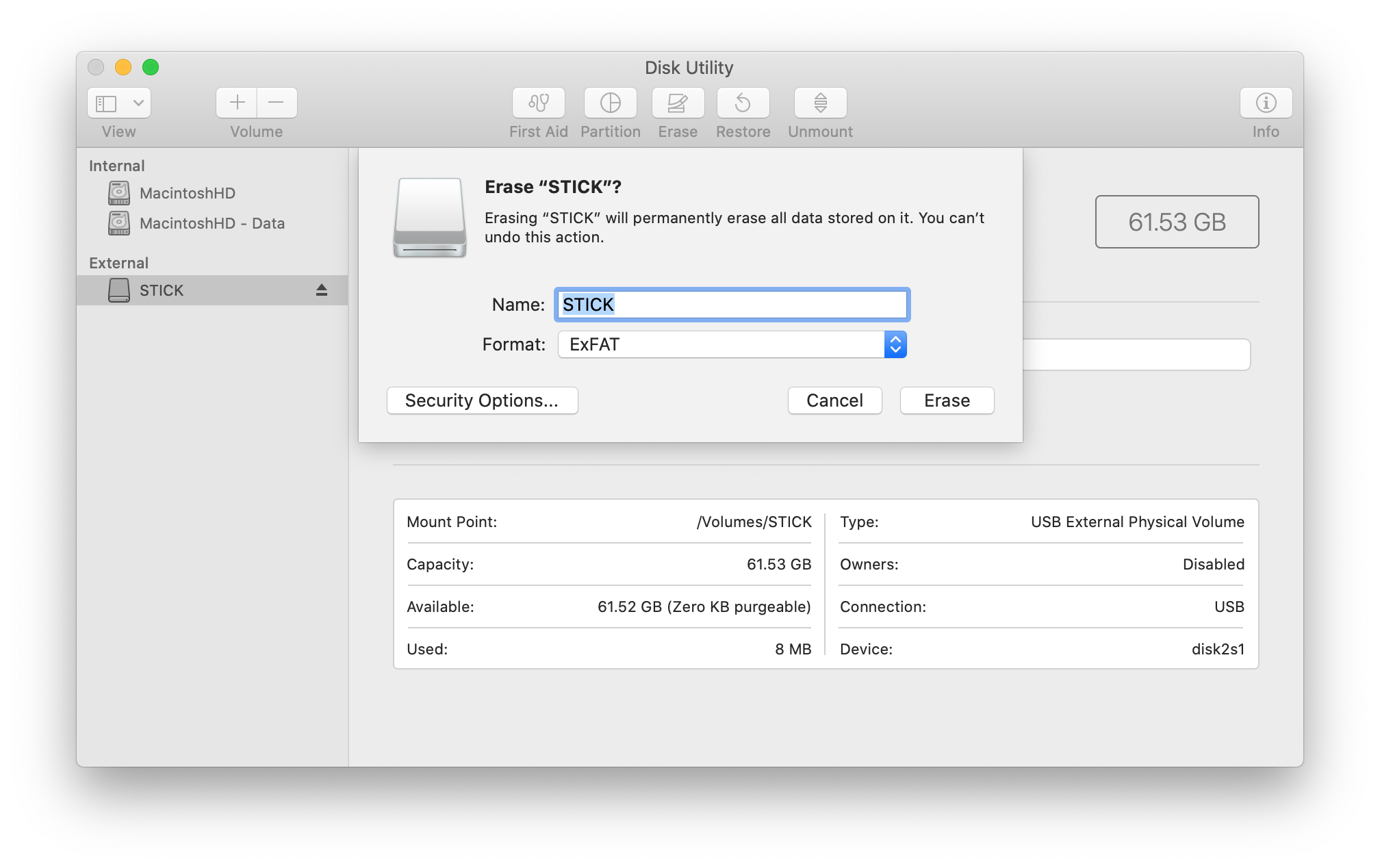 ExFAT is supported on Mac, Windows as well as Linux and any of those OS can both read and write to an ExFAT formatted filesystem.

Alternate approach, if you wish to stick with MS-DOS FAT filesystem:

You can use the split command-line utility. The split utility comes pre-installed in macOS (I have assumed you are using a Mac).

The split command-line utility lets you split a large file into smaller chunks which can be managed separately. The command lets you specify the size of a chunk and the input file is broken into the chunks of mentioned size with the last chunk equal to or less than the chunk size.

The chunks can at a later point be re-joined to restore the original file.

This command-line utility comes in handy in cases where you have restrictions on file size such as yours (or such as when wanting to email a larger file which is over the limit for the attachment size allowed in an email).

This is how you can use the split command to break the 22GB file in question into chunks smaller than 4GB each. On your Mac, launch Terminal.app, use the cd command to navigate to the directory where you have the original 22GB file and type the following command:

Now you can copy the individual chunks on the memory sticks as they are smaller than the allowed size for the filesystem.

At a later point, when you want to re-join the chunks, copy the chunks onto a filesystem which supports larger file size (such as other Mac, or the same Mac in future), and run the following command:

where the original_filename is the name/path for the output file.

Additionally, if you'd also want to make sure that the integrity of the file is maintained, you can derive and verify with the MD5 checksum for the original and the re-joined file.

The MD5 checksum for a file can be obtained by running the following built-in macOS command:

which should give an output similar to the following:

The value for checksum should match before and after the split. The value of checksum shown above would differ in your case.

How can I increase text size in single-user mode?

How can I find out the size of a video file on my iPhone 6 camera roll?

How to create link aggregates (bonded interfaces) in shell?

Does Apple save a (hashed) version of my device passwords?

Why is my 2016 iMac “Beach Balling” a lot after upgrading hardware?

Types of memory: Why do private and shared not add up to real memory?

Can iPhone get damaged by magnets in case?

Which Siri on which device does what?

MacBook Air 2015 MagSafe charger is too hot to touch

Im trying to use xcrun altool to get my app notarised, what is –asc-provider parameter?

How to map a MacBook keyboard to write different characters?

Do the Airpods Pro change how your internal voice sounds?

How can I access a computer behind internet sharing?

Use an External USB SSD before logon (daemon)