It’s time to replace my bottom bracket. I have an FSA MegaExo with what appears to be a part ID of BB-7100. There are various markings on the face of the cup, as shown in the attached photo. While this bottom bracket has done well enough, I’d like to look at other options and get the best price I can. But I’m not sure what I need to match up to ensure compatibility. I see, for example, that one measure is 24mm, which appears to be the diameter of the hole for the the splined shaft. Presumably the width of the bottom bracket shell also matters, but it appears that there are bottom brackets that are made to accommodate various widths.

So, in short, what do I need to match up to ensure that a replacement will fit? Thank you. 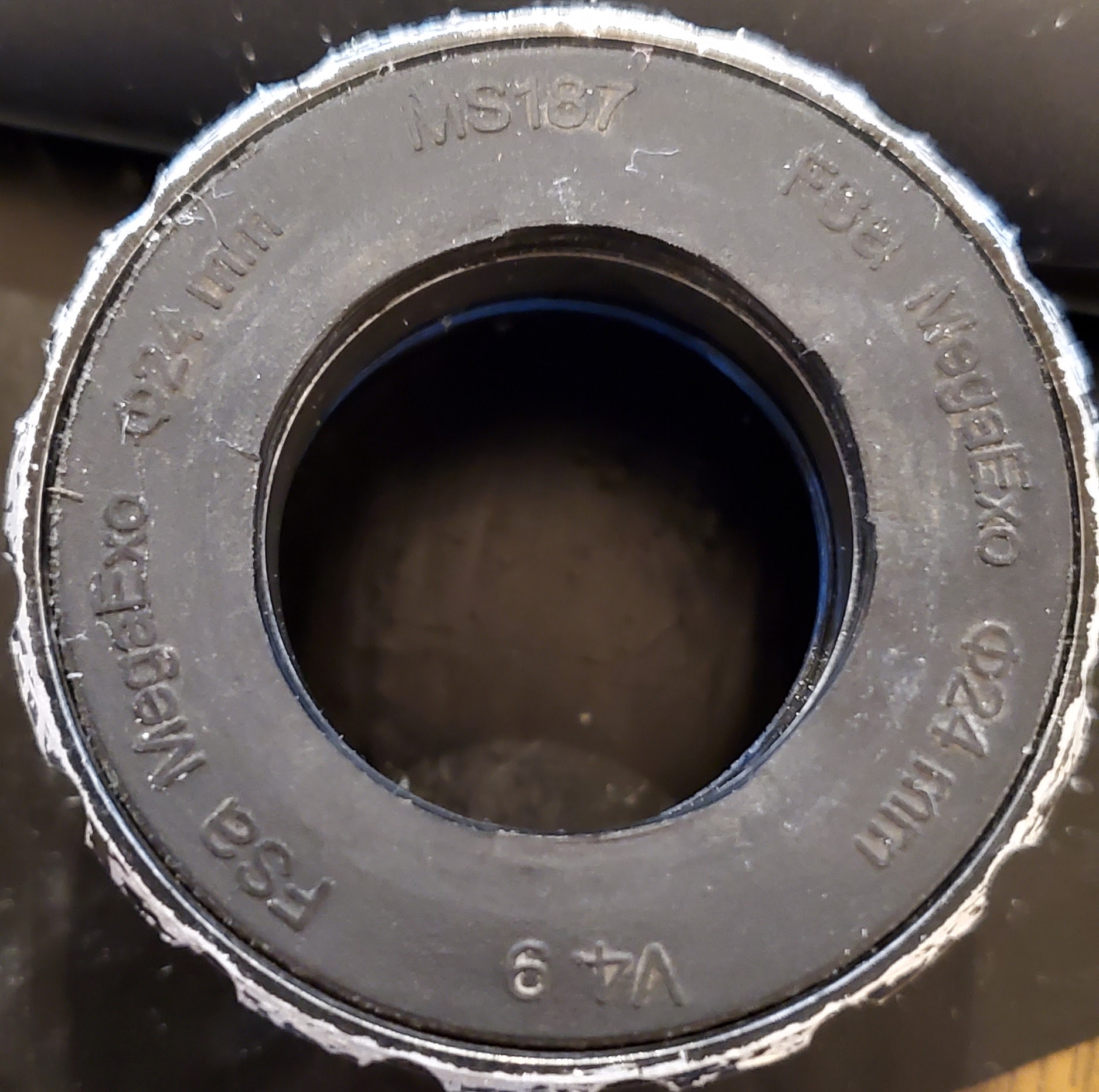 BB-7100 is specced for no-pinch-bolt ("NBD") FSA cranks. One of the confusing things about crank/BB compatibility with FSA is that they nominally maintain that their NBD style cranks are compatible with specific FSA BBs only, even though the target bearing face-to-face numbers are essentially the same (or they are to my understanding at least, but I am making some assumptions there because they aren't published and I think I may have screwed around measuring it once or twice, but not enough to say so empirically, especially because there's a lot of them.)

I assume it's a tolerance control thing. Pinch bolt style external cranks have a very wide tolerance for the exact face-to-face bearing spacing, but NBD by nature doesn't. So in other words, a slightly over-wide shell would screw everything the heck up in a way that wouldn't even be noticed on a pinch bolt crank. By making NBD-specific BBs, they can play off the dynamic of giving wide shells an adequate berth by using scuff washers to hedge in the other direction.

In practice, the whole thing gets ignored often, whether or not due to user/mechanic ignorance, and consequences seem infrequent. They are possible, however. So FSA's answer to your question is going to be whatever BB is prescribed for your crank model in the compatibility charts they publish, while many others would say any external BB. Which take you should go with is a judgment call. Also, FSA BBs are garbage and expensive. If it's a bike that's gonna be around a while, I would just face the shell to spec and get a King.

Answered by Nathan Knutson on January 4, 2022

There are two things you need to match up for compatibility.

As Adam says the frame bottom bracket shell is BSA/British, also known as 'ISO standard threaded', either 68 or 73mm wide.

FSA Megaexo accommodates a 24mm diameter crank axle, which is the same as Shimano HollowTechII cranks. SRAM GXP is different and uses 24mm drive side, 22mm non-drive side.

You can either get another Megaexo BB or a Shimano unit.

Answered by Argenti Apparatus on January 4, 2022

It looks like this is an external-bearing BSA (British) bottom bracket, which is a very widely used standard. You've got no end of options.

You are correct that the BB shell width is important. If you've got a road bike, it is probably 68 mm; if it's a mountain bike, probably 73 mm, and there are some bottom brackets that are adaptable to either. The other important dimensions are the BB shell diameter and the threading (which are decided by the bottom-bracket standard, in this case British, as you now know).

You may need a special tool to remove your current BB, and may need a different special tool to install a new BB. Assuming the bearing cups are in good shape, you might be able to get away with just installing new cartridge bearings.

Is there such a thing as a 25mm crank puller?

I want a bolt on crank, but dunno what terminology to use to find one

Rear stand light on a Cube Nuroad FE not working

Can this crack in the steel chain-side dropout be welded?

What is the purpose of rollers

What causes the threads on bike pedals to become stripped?

Sram cranksets, are there differences other than weights betwen models?

How to increase the durability of gear-shifters

Does it make sense to fine-tune saddle forward-backward position without also adjusting the height?

What brand/model frame is this?

How to transport an unusable bike AND a set of wheels without a car?

Rear dropout with adjustments screws of a single speed bicycle