Bioinformatics Asked by beerzy on June 17, 2021

Hi and sorry for the long post in advance,

I’m doing a survival analysis of lung cancer patients using Python’s lifelines package.
According to the documentation, the function plot_partial_effects_on_outcome() plots the effect of a covariate on the observer’s survival. I do understand that the CoxPH model assumes that the log-hazard of an individual is modelled by a linear function of their covariates, however, in some cases the effect of these covariates seems to perfect when plotted. I’ll illustrate these with three images below describing the issues I have in my data analysis.

Example 1:
This one I’m providing as it looks realistic to me, there is a clear difference in the effect of the covariate when positive or negative. 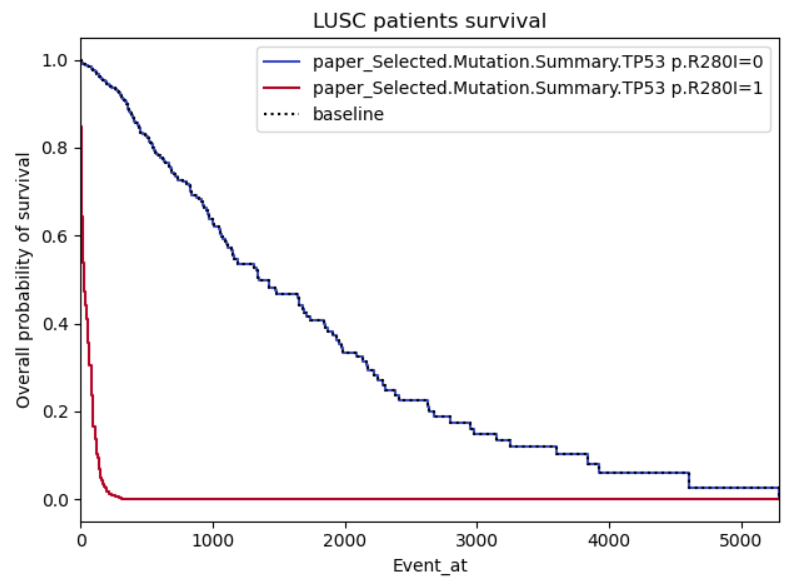 Example 2:
This one just looks gimmicky, my concern is firstly there seems to be a perfect relation between the pathologic stage of cancer and the survival, it’s logical that higher stages should impact the survival negatively, however, I don’t understand why the graph is so symmetric as the survivability of cancer shouldn’t be proportional to the patient cancer staging. 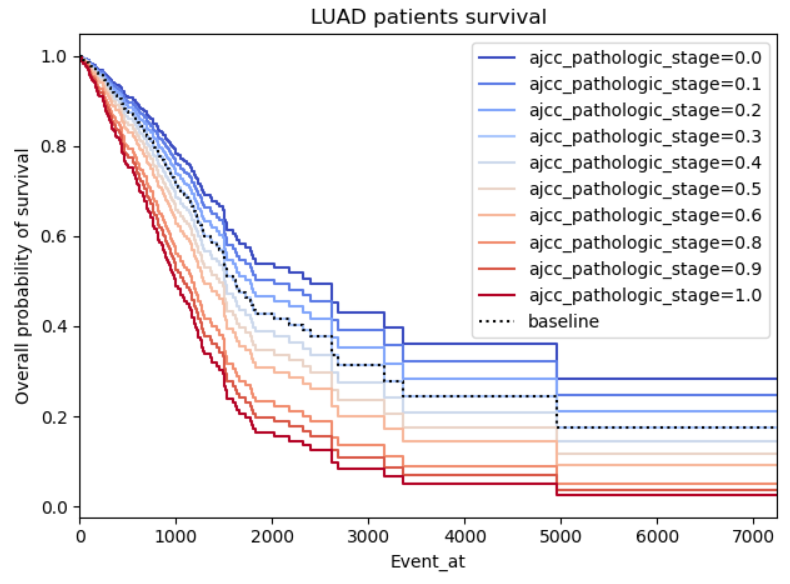 Example 3:
Same problems as for example 2, this time with a binary not categorical variable (so I’m less reluctant on disbelieving it), however, the curves do seem to symmetric, almost like it’s the same curve but with a standard deviation. I also highlighted a region of interest which I don’t understand why both curves stabilize (maybe lack of patients in those regions?) 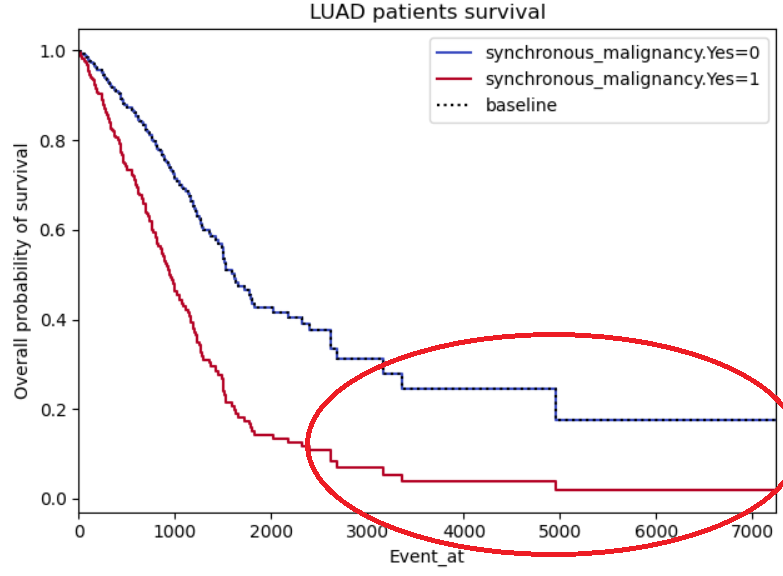 How that shows up in a survival plot is a little different because of the relationship between hazards and survival. The survival curves end up following the pattern exemplified in Example 2.

As for example 3, I would guess that there are few individuals with event times past 3500. This is why you have those large jumps. 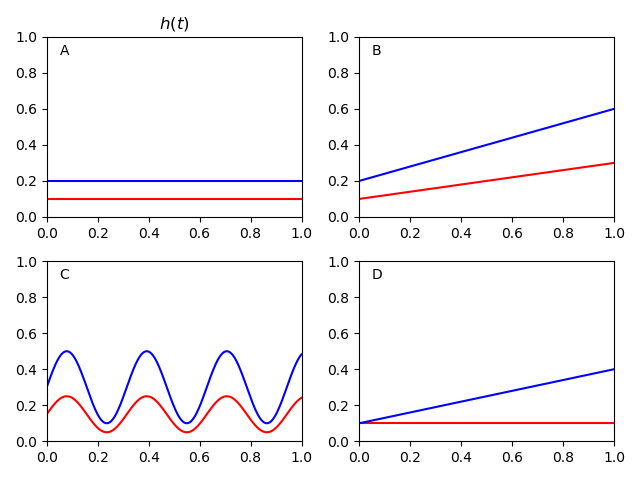 Since the proportion is remaining constant, it can look a little hard to see. To make it easier on the eyes, you can log-transform the hazard functions. Below is a plot that does that. 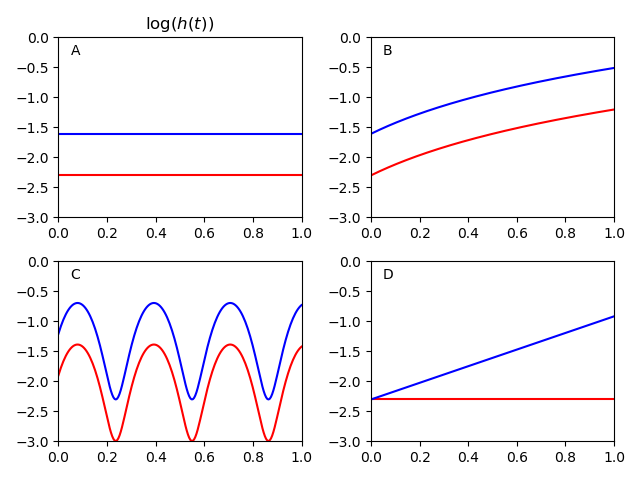 As you can see, the hazards are a constant distance from each other for A, B, and C. Basically, the proportional hazards assumption is saying that your scenario looks something like one of those plots.

In scenario D, the hazard ratio varies over time. At the beginning it is basically HR=1. At the end it is basically HR=4. With the proportional hazards assumption, Cox regression will essentially take the 'average' of the hazards over time. In this case it would give you an estimate of HR=2. Depending on the scenario, this 'smoothing' may be more or less acceptable. But this is basically what the proportional hazards assumption does in the background.

The proportional hazards assumption is actually more problematic in the cases where the two hazard functions cross each other. Below is an example of that. 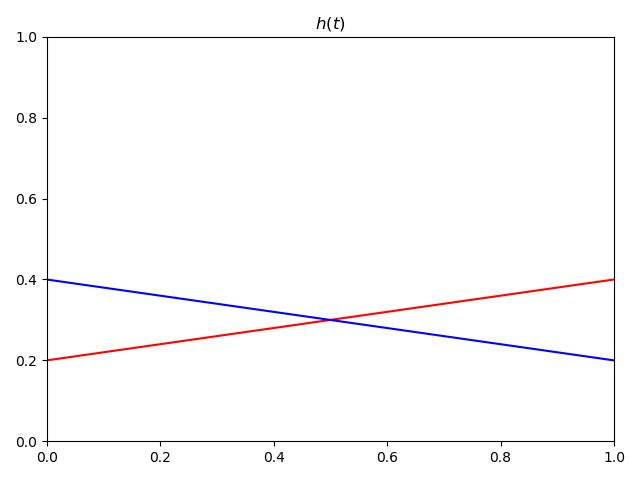 In this scenario, blue has an increased hazard at the start (relative to red) then a decreased at the end. A Cox proportional hazards model would give you HR=1 in this case, because the average over all time points is no relationship.

The next question is do those violations matter? This somewhat depends on the question you are trying to answer and how substantial the violations are. In cases where the two log-hazard curves don't cross (like in D), it may be acceptable to smooth over the variations. However, it settings where the curves cross in the final figure, it is probably best to not ignore this problem.

The original write-up of this answer was here

How to fit all genes (labels) in chromosome ideogram plot made by RCircos package?

How to add cluster name to metadata in Seurat?

Standard for when to collapse phylogenetically uninformative nodes

P-value correction when evaluating correlation between gene and miRNA expression

How to run MaxQuant in command line mode?

Why does the FASTA sequence for coronavirus look like DNA, not RNA?

How identifiable are human omics data and how to mitigate their identifying features?

How to extract metadata from NCBI’s experiment?

Treat methylation as binary or continuous signal when detecting DMR?

Apply trained PRS on another dataset

How to map short sequences to long reads, recovering all multiply-mapped high-quality matches

How to use SRA Toolkit to blast SRA accessions?

What is the meaning of split read?