Poly-symbiosis? What's the name for this?

A mutually beneficial relationship between two species is called symbiosis.

If multiple symbiotic relationships exist with a single common (dominant) species, is this called ‘farming’?

The term "holobiont" refers to a community of mutualistic organisms that function together as a unit. A human and the many species of gut bacteria that digests their food are the typical example of a holobiont. The term is mostly used to describe microbial life in and around a larger host organism, but coral reefs and the communities of fish, crabs, etc. they support are also cited, so domesticated plants and animals and human farmers could potentially be thought of collectively as a farm holobiont.

Answered by timeskull on January 6, 2022

A mutually beneficial relationship between two species is not called symbiosis, but is rather called "mutualism." The benefit is measured in terms of fitness; a combination of survival and reproduction. Symbiosis is the degree to which species are "together," which is used in terms of physical proximity or degree of dependency. Pathogens, for instance, have a symbiotic relationship with their hosts and physiologically depend on their hosts by feeding on them. Mutualism and symbiosis are often conflated, and should not be.

Let's dissect: "If multiple symbiotic relationships exist with a single common (dominant) species, is this called 'farming'?" It seems like you mean, if members of the same species increase each other's fitness. Reciprocal fitness benefits between species is called mutualism, and within species is cooperation. There are important differences between mutualism and cooperation from evolutionary points of view and they have vastly different intellectual histories. None of this is really called "farming," except for some ant-insect mutualisms, where ants raise and protect aphids for a reward (honeydew; i.e., plant sugars secreted by some insects).

I think that you are refering specifically to mutualism, check this diagram from Wikipedia 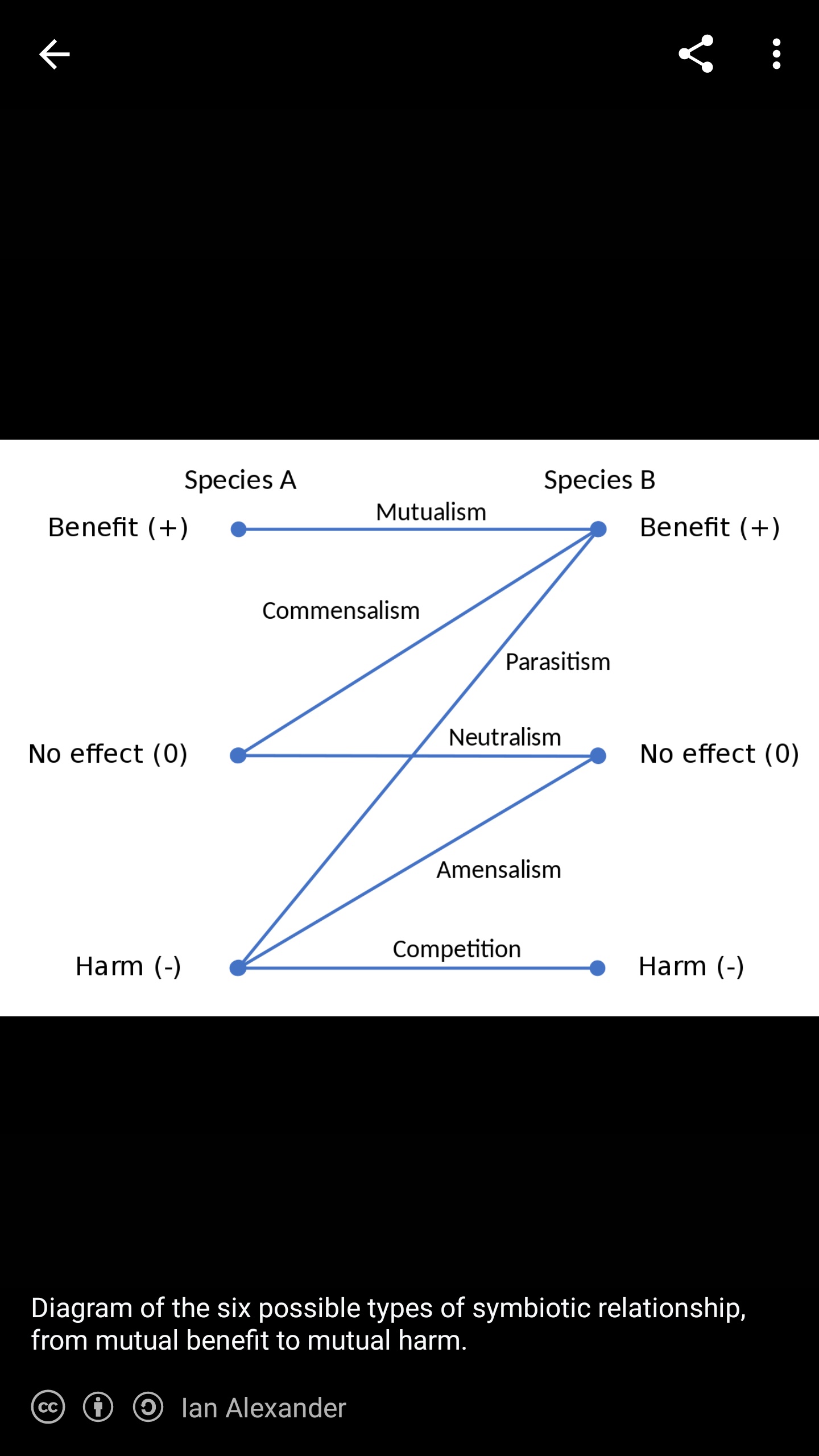 I suggest you to edit your question adding mutualism or mutualistic symbiosis, furthermore, I would add the tags "Ecology" "ecological-communities" and "mutualism".

I haven't heard of that term or comparison, personally I would use "multiple mutualistic symbiosis between A and B,C,D,etc... I can't help anymore, I hope that those changes in your question will help you to find a proper answer. Héctor.

Why is the chordate nerve cord described as hollow when it appears to be solid?

Are human bodies programmed to die?

Can HIV be transmitted via mosquitos?

To which ungulate species does this tooth remainder belong?

How is the renal osmotic gradient maintained even though the blood osmolarity changes?

What instances are there in which two species share the same binomial name?

Is there a biological or technical reason for a 40 Ct cutoff in nucleic acid detection assay?

Does transcription terminate at the end of antibiotic resistance genes on the Duet expression plasmids?

How does aspirin “thin” blood?

Why do seagulls hit the ground with their feet?

How does a frog separate blood in its ventricle?

Were nicotinic acid/amide or flavin nucleotides ever part of primary RNA sequence?

How to estimate the scientific consensus or not about Hydroxychloroquine?

Reason for partially double-stranded DNA of Hepatitis B virus

How do cilia beat?

Do circadian hormones fluctuations follow sleeping patterns or the time of day?