Why aren’t hybrids of different species of felinae (say, hybrid of domestic cat with manul, cheetah, ocelot, puma or panther) widespread? Why were they not artifically created?

In order to form a hybrid, substantial genetic similarity between the organisms is required. To understand why, the successful formation of a zygote from the gametes of the two parents (i.e. fertilisation) in higher animals like mammals requires that the genomes of the organisms be reasonably similar (or homologous; see for instance human fertilisation). This is because successful development of the fetus appears to require that a very specific combination of genes and proteins be present and in the right relative ratios (it's helpful to remember that the genome is a highly analogue computer (see here also), not just a set of instructions to build an organism) - think of the significant effects of simply having an extra copy of one chromosome in Down syndrome, or the fact that triploidy or quadruploidy are often tickets to the death of the human embryo (and so having half of your genome from two different animals could lead to an imbalance in the proteins required to develop normally). I'll be addressing mainly the feasibility of obtaining a hybrid at all; of course in order to become widespread a hybrid would need to be fertile (although see the sterile mule) which would require even more genetic similarity, specifically in order that the chromosomes from each parent can interact, they have to be similar enough that the proteins regulating this process will recognize them as homologous, and enable a process like chromosomal crossover to take place during the meiosis occurring in gametogenesis.

To answer your question about felinae and panthera first, several panthera genomes have been sequenced, and (see here) the tiger for instance has only 95.6% similarity with the domestic cat and diverged 10.8 MYA. For comparison, human and gorilla have 94.8% similarity and diverged 8.8 MYA, so that puts into perspective why you wouldn't expect a tiger-cat hybrid, or for that matter any felinae-panthera hybrids. Those dates are from the linked paper. (Edit: It appears from wikipedia as referred to by the OP above that there actually is a puma-leopard, i.e. felinae-panthera, hybrid which I wasn't aware of (although all of the reports are old, so there is no genetic evidence to prove that it was in fact a hybrid). I assume this may be an exception to the rule; what I was trying to show is why such hybrids are not necessarily to be expected, and as I said below, I'm more surprised about how many hybrids are possible. It does appear though that this particular hybrid is prone to dwarfism, which indicates that it probably does not have a particularly viable genetic makeup, and I think it was sterile).

With regards to your question about felinae hybrids, if you go to Timetree, then it will tell you that Panthera tigris and Felis catus (domestic cat) diverged 14.4 MYA, and by comparison Aciconyx jubatus (cheetah) and Felis catus diverged 9.4 MYA, so it seems reasonable to suppose that they can't hybridise. (But note that P. tigris and P. leo still diverged 6.4 MYA and they can hybridise: the relatedness of two organisms isn't the only thing at work, and a better measure is the genetic similarity; this paper mentions that hybridisation ability correlates both with genetic similarity and time since divergence). Interestingly, this paper actually indicates that the percentage alignment of the cheetah genome to the domestic cat genome is only 91.1% with 93.6% similarity to the tiger, indicating that the cheetah may be a specialised outgroup.

For a more familiar comparison to all of these, Canis lupus which is the ancestor of the domestic dog, dingo, and the gray wolf only arose around 700,000 YA according to wikipedia, although I do not know the exact sequence similarity. Domestic dogs (everything from chihuahuas to great Danes) only diverged 40,000 YA, so the different cats are only superficially similar by this comparison.

There's a diagram on wikipedia shown below which nicely illustrates the different hybrids within felinae (although some seem dubious), so you can see there are actually quite a lot, and although most of the cats involved haven't been fully sequenced, presumably some of these hybrids cross some of the boundaries which I've mentioned above. They do actually include a successful hybrid between a domestic cat and an ocelot (although I can't find another source for this, so it might not be possible), and a hybrid with a jaguarundi (which appears to be closely related to the cheetah) is described as dubious here. Unfortunately, I don't know if either of those cats has been completely sequenced. Ultimately predicting hybridization is a complicated field. 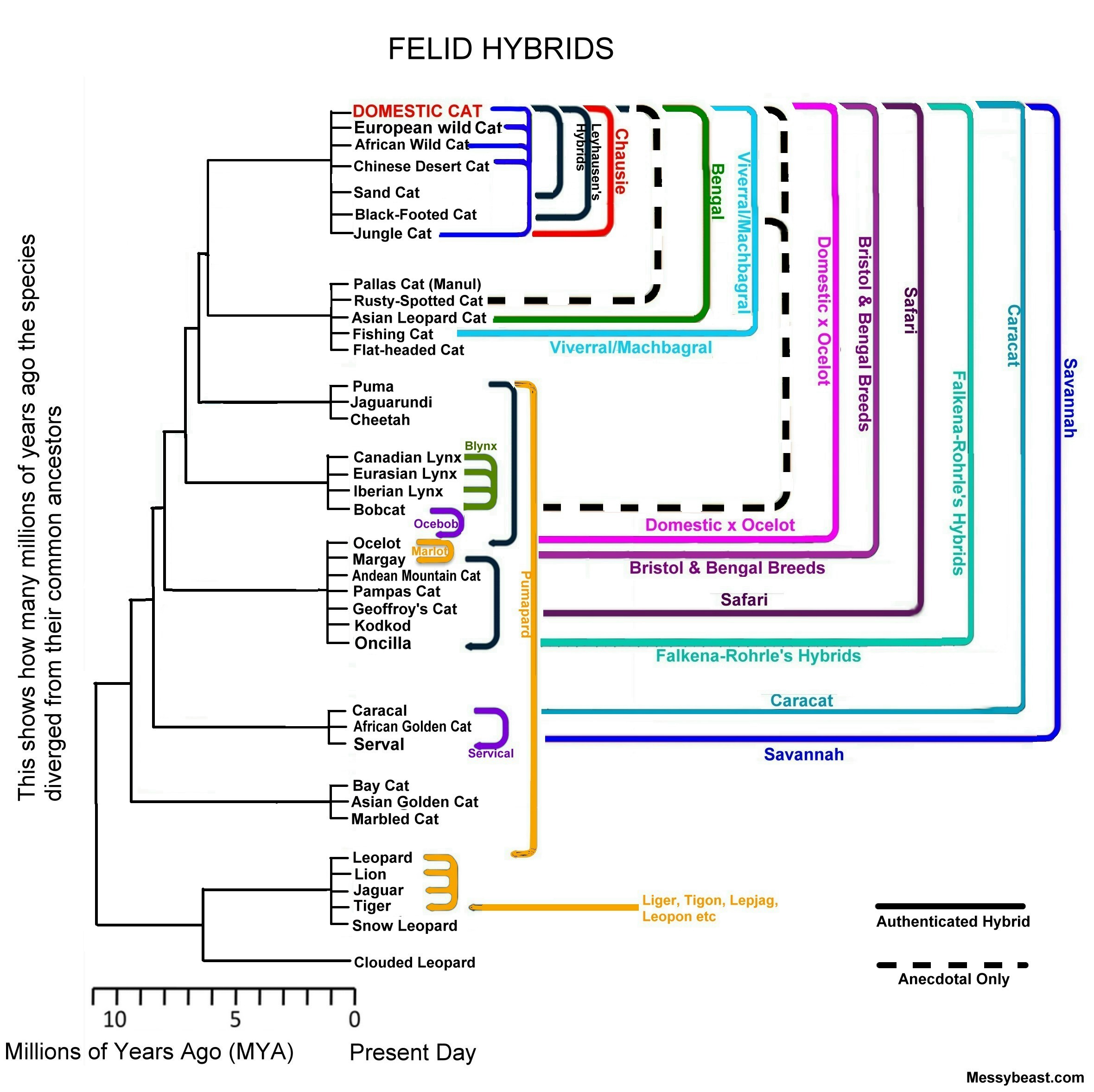 This image below shows a more detailed phylogeny of the cats to illustrate the evolutionary timescale:

And for a comparison to all of that, this image below (from here) shows the phylogeny of the dog (which you might be more familiar with in terms of hybridisation), and if you realise that the whole part of the tree in B from the bush dog down diverged 9-10 MYA (see here - comparable to the whole cat family) and that the bush dog despite its name is extremely dissimilar to modern dogs (for instance it only has 74 chromosomes compared to the domestic dog's 78), then this will illustrate that the evolution of the modern hybridisable dog family (in C in the image) is tightly packed into a much much shorter time than the entire cat branch. All of the names like D1 on the right are modern dogs. 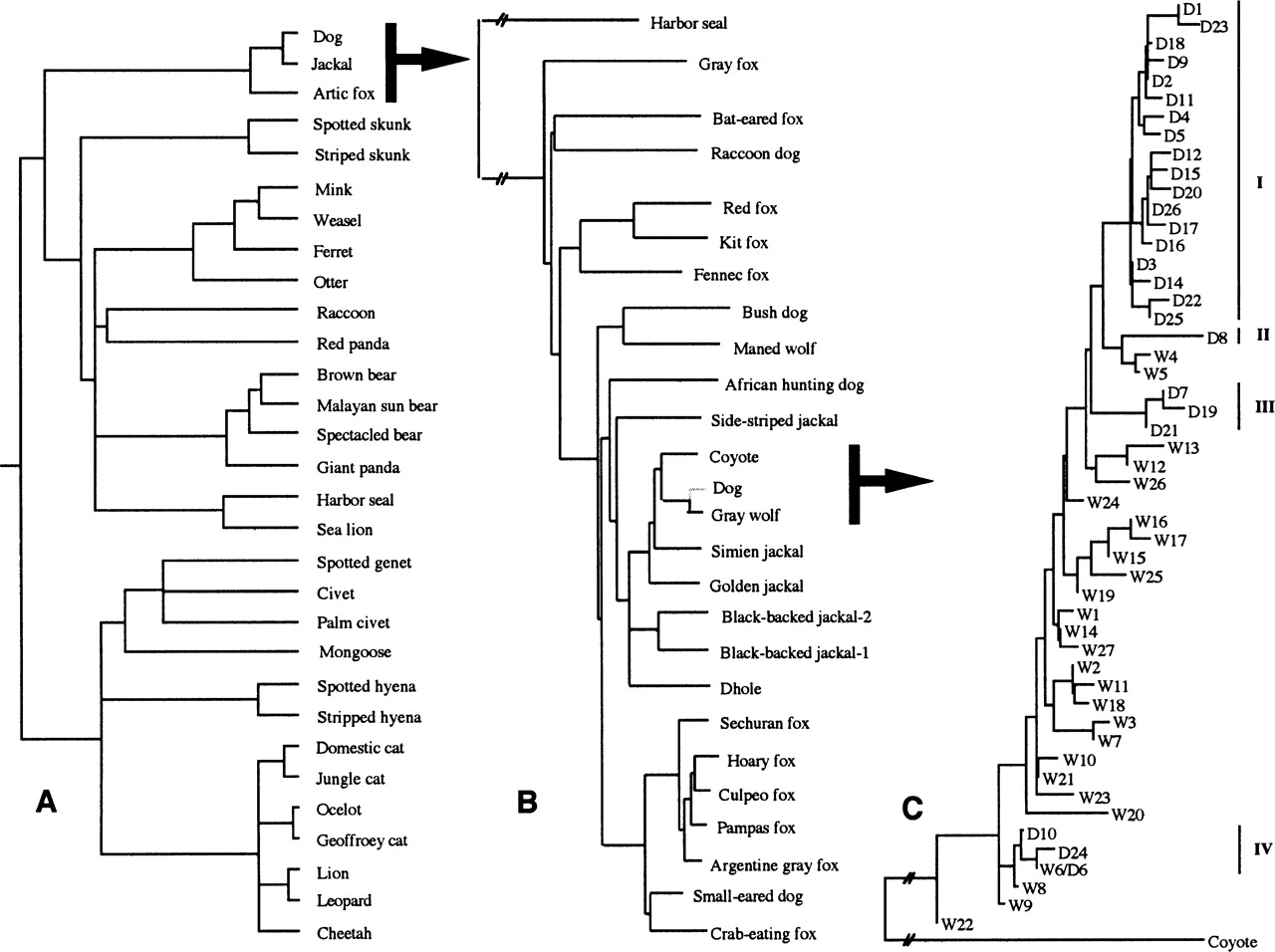 With regards to your question about artificial creation, I think a point to remember is that a lot of these cats are rare/endangered and although such hybrids are still done, there is also criticism of such proceedings. Anyway, I think a good take-home point is that the cat family is actually very genetically old and diverse. I think it's more surprising how many cats can actually be hybridised.

How to calculate percentage of DNA that ancestors contributed?

What is allosteric regulation?

What is the primary cause of death for small animals in urban and suburban areas?

Can ‘human’ become a genus due to space colonization?

The fraction of the genome that is evolutionarily conserved through purifying selection is less than 10%?

Where can we see professional discussions about vaccine development of the covid-19?

Why do dragonflies lose all of their coloration once they die?

How close is the U.S. to herd immunity, assuming long-term immunity?

types of cells in a pharyngeal specimen

is there a limit to how much humans can taste?

Why do some karyotype graphs contain 46 pairs of chromosomes?

How do we know that selective agonists are indeed selective?

TMB vs ECL for ELISA: which detection method is more sensitive?

Activated carrier molecules and their relationship to enzymes

Can elephants smell when they have water in their trunks?