What exactly does the scary option "Allow incoming connections" do in Bitcoin Core?

Software authors seem to enjoy consciously freaking me out by having vaguely or entirely uncommented options in their software with very ominous labels.

In Bitcoin Core’s settings, it says "[X] Allow incoming connections", which has an entirely meaningless "elaborate description" on hover which just repeats what it already said with a couple more words: "Accept connections from outside."

What does this actually do? My first thought is that this enabled-by-default option somehow allows people from all over the world to connect to my computer and freely grab Bitcoins from my wallet.dat and look through and download files from my computer. Naturally, it doesn’t mean that, but the way it’s so vaguely described does not make me feel good, to put it that way.

(* Usually when you ask that kind of question, people will lie to you and claim that there is no security/privacy issue, when in fact there actually is. For example, PHP developers told me that there’s nothing lost by keeping the expose_php and other configuration options on, but to me, there definitely is as it sneakily lets the world know that you use PHP and even which version. It seems that, whenever something is bad for users, but good for the authors of something, they claim that it doesn’t pose a security/privacy threat.)

Would appreciate some clarification. 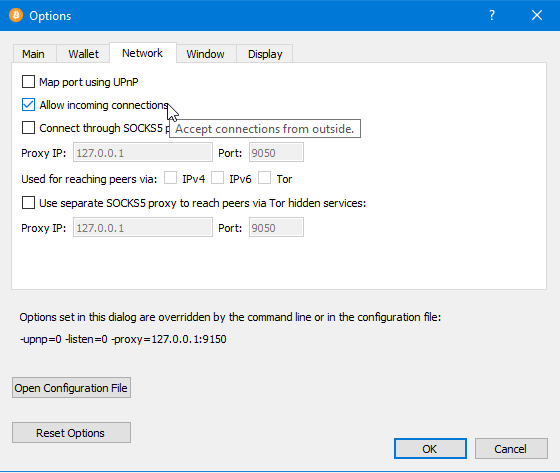 A network is formed by computers connecting to other computers. If nobody had that option turned on there would be no network, and no bitcoin. It's possible for some fraction of the nodes to participate while making only outbound connections, without accepting connections from anyone else, but only because there are enough other nodes out there to accept their connections and handle their traffic.

There are two ways by which bitcoind connects to peers.

The default is purely outbound connections - the node will use DNS seeds, as well as its own database of previously seen peers, and attempt to establish connections to them as needed (upon startup, or when existing connections are closed).

These peer connections are used for syncing network state, such as blocks, transactions, and information on other peers.

Barring a catastrophic flaw in bitcoind's implementation, this is not a security risk.

Depending on your network setup, you may need to enable port forwarding in your router and/or local machine's firewall before enabling this option has any effect.

What are the potential causes for the “block not found on disk” error?

When using bitcoin-cli I get an error regarding fallback fees when trying to send regtest Bitcoin. How do I resolve this?

Do I need a Bitcoin full node in order to use BTC RPC Explorer?

What is the point of a soft fork when it’s backwards compatible?

Should the Policy to Miniscript compiler(s) be considered as deterministic and is this the end goal?

Merkle root with one transaction

Blockchain.info “Too Many Requests” – Alternative solutions that can be hosted by myself

Send or receive bitcoins with bitcoin-cli without downloading full blockchain

How does lnd make sure it does not reuse the same route twice for a retry after the first payment failed?

Is Merkle tree pruning described in the whitepaper feasible/useful? If not, would there be any alternative?