Mechanism of three-membered lactone hydrolysis in base

I was reading up on the participation of neighboring functional groups and in the reaction below, I was wondering why hydroxide attacks the C–O bond instead of the carbonyl group of the lactone. Lactones tend to be more electrophilic compared to acyclic esters, as the lone pairs on the ether oxygen are not positioned correctly to participate in conjugation, so I would expect hydroxide to attack the carbonyl. Does it have to do with the angle of attack, given the small ring?

According to Organic Chemistry: Second Edition,[1, pg 934](from which I assume that the question was taken):

Enantiomerically pure (R)-2-bromopropanoic acid reacts with concentrated sodium hydroxide to give (S)-lactic acid. The reaction goes with inversion and is a typical SN2 reaction—and a good one too, since the reaction centre is adjacent to a carbonyl group. If, on the other hand, the reaction is run using $ce{Ag2O}$ and a low concentration of sodium hydroxide, (R)-lactic acid is obtained — there is overall retention of stereochemistry.

Therefore this reaction that has been questioned takes place at a low concentration of $ce{OH-}$ in the presence of $ce{Ag2O}$.

How do we decide between competing mechanisms?

The next paragraph clearly outlines what we need to look for in order to proceed.

In the first, we have conditions suited to an SN2 reaction: a very good nucleophile ($ce{OH-}$) and a good leaving group ($ce{Br-}$). Improve the leaving group by adding $ce{Ag+}$ ($ce{Ag+}$ assists $ce{Br-}$'s departure much as $ce{H+}$ assists the departure of $ce{OH-}$ by allowing it to leave as $ce{H2O}$) and worsen the nucleophile ($ce{H2O}$ instead of $ce{OH-}$, of which there is now only a low concentration), and we have the sorts of conditions that would favour an SN1 reaction. The trouble is, without neighbouring group participation, the cation here would be rather unstable — right next to a carbonyl group. The carboxylate saves the day by participating in the departure of the $ce{Br-}$ and forming the lactone. The key thing to remember is that a reaction always goes by the mechanism with the fastest rate.

From what I have understood the question lies in the step after the lactone is formed. What reacts, $ce{C-1}$ or $ce{C-2}$? Let's assume that both are possible and proceed with the two possible cases.

Firstly, the $ce{OH-}$ attacks the carboxylic carbon($ce{C-1}$). We get the possible reaction mechanism to be: 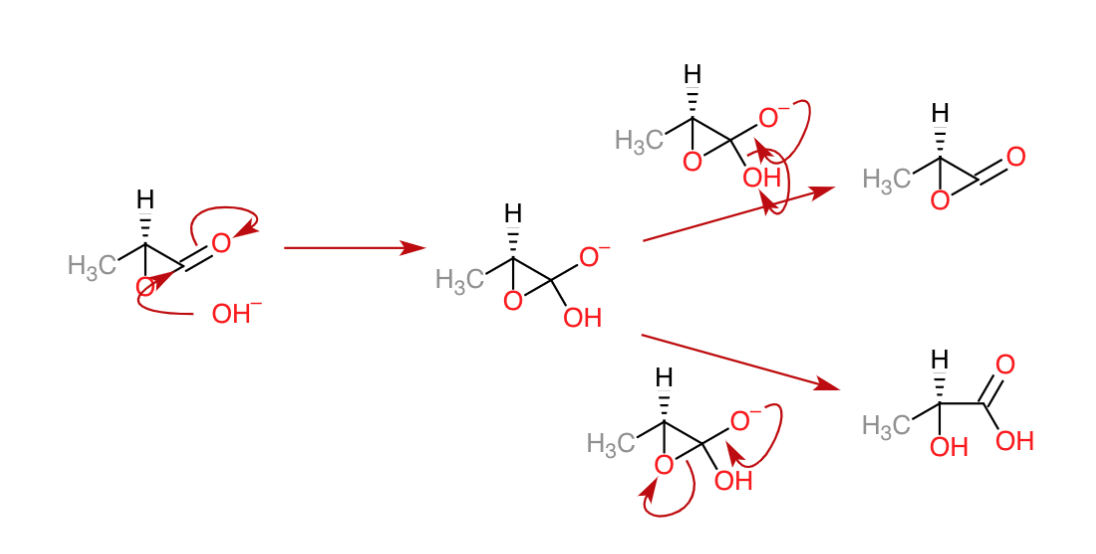 In the second case, let's assume that $ce{OH-}$ attacks $ce{C-2}$. The possible reaction mechanism would be:

From the second quotation, we can say that if we are able to decide which is faster, that would be the reaction that takes place and so we reach our next question.

Which reaction is faster?

In pathway 1, we are talking about the base hydrolysis of esters. However, esters are not very reactive and the concentration of base in this case is low as well.

In pathway 2, we are talking about an SN2 reaction taking place on the $ce{C-2}$ carbon which removes the ring strain that is seen in the lactone. Therefore, this would be faster than base hydrolysis that takes place at $ce{C-1}$

Another way of checking the speed of the reaction would be to use the principle of least motion, (as pointed out by Yusuf Hassan).

According to Advances in Physical Organic Chemistry, the principle of least motion is defined as:

The principle of least motion, states that those elementary reactions will be favored that involve the least change in atomic position and electronic configuration.

Using this, we can compare the relative rates of the two reactions.

During the base hydrolysis of esters, the hybridisation of the $ce{C-1}$ carbon changes from $mathrm{sp^2}$ to $ce{sp^3}$. This leads to a big change in the atomic arrangements since you go from a trigonal planar configuration to a tetrahedral arrangement.

In case of the SN2 reaction on the $ce{C-2}$ carbon, the configuration as a whole doesn't change. It remains $mathrm{sp^3}$ throughout the reaction, so there is less rearrangement taking place.

This implies that according to the principle of least motion, the SN2 reaction is favoured over the the basic hydrolysis of the lactone formed via the anchimeric effect.

Hence, we can say that the reaction that would take place would be the attack on $ce{C-2}$ and not the basic hydrolysis of the lactone.

Answered by Safdar Faisal on January 4, 2022

When converting between a hydrated electrolyte amount in mass and in milliequivalents (meq), why are the water molecules taken into account?

Identity a metal based on its properties

Water purification procedure that does not involve a flocculant of any kind?

How do I calculate the isoelectric point of amino acids, each of which has more than two values of pKa?

What is reaction between isopropyl alcohol and acetone?

Why can’t the reaction of grignard reagent with carboxylic acid give a ketone?