A number is a mountain range number if the inequalities satisfied by their consecutive digits alternate. In a way, looking at the number’s digits should exhibit a ///... or a ///... pattern.

More formally, if our number n has $k$ digits

then n is a mountain range number if

Given an integer with 3 or more digits, output a Truthy value if the number is a mountain range number or Falsy otherwise.

A positive integer n with 3 or more digits, in any reasonable format, e.g.

(Added another Falsy test case as per the comments, some answers might not cover the 4422 test case)

This is code-golf so shortest answer in bytes wins! Standard loopholes are forbidden.

Algorithm taken from the APL answer.

Checks whether for all sliding triplets the center is strictly larger (or strictly smaller) than the previous element and the next element.

Alternately reverses signs of all differences, and then multiplies them all by first difference: mountain range sequences will all be positive

Would be 40 bytes if defined as a function instead, so apologies to Robin with whom this would tie without the scan for input.

Takes as input a wide string of digits and returns zero if that number is a mountain range number.

Explanation (can add more detail if people are interested) 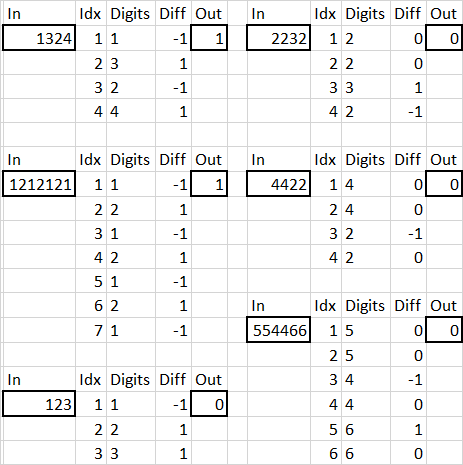 Thanks to all in the comments for improvements - especially bit-shifting which I never would have thought of!!

Slight subtility: o↙Ḋ is used to check whether the digits are increasing or decreasing. By default, o (which is the same as o₀) is for increasing order, and o₁ is for decreasing order. By using o↙Ḋ (Ḋ being an integer between 0 and 9), we check that the whole predicate is impossible for o₀, or o₁, or o₂, …, o₉. o₂ to o₉ are not implemented and thus will fail, which doesn’t impact the program as a whole.

If true. is an acceptable falsy value, and false. an acceptable truthy value (which I don’t think it should be), then you should be able to remove these 3 bytes: ¬{…}.

Replaces each character in the input string with the cmp comparison (<=> in Ruby) between it and the next character $'[0] (if there is no next character, remove the character instead). Then, check if the resulting string consists entirely of alternating 1 and -1.

Check for duplicate consecutive numbers first by checking if the input string matches /(.)1/ and inverting it. If no such pairs are found, replace each character with true or false based on whether its cmp style comparisons (<=>) to the character before it $`[-1] and after it $'[0] are not equal. (If there is no character before or after it, the <=> returns nil, which is definitely not equal to whatever the other character comparison returns.) Finally, it checks if the result does not contain an f (meaning no falses were returned).

-': subtract (as ascii codes) each prior; implicit 0 before first

*': multiply by each prior; implicit 1 before first

that applies the operator (?) to pairs of adjacent elements. This is shortened to the pointfree g=(=<<tail).zipWith.

The idea is a bit clearer to see in the slightly less-golfed form:

We check that the first three digits (a,b,c) have the a->b steps and b->c steps going opposite directions by checking that the differences a-b and b-c have opposite signs, that is, their product is negative. Then we recurse to the list without its first element until the list has fewer than 3 elements, where it's vacuously true.

An alternative to check suffixes directly turned out longer:

Answered by DeathIncarnate on December 15, 2020

Added 13 bytes to fix error kindly pointed out by @ChasBrown.
Saved 9 bytes thanks to @ChasBrown!!!

5 bytes saved thanks to Jo King & 1 byte thanks to Bubbler. Turning into a real team effort!

I seem to like trying shell submissions, and learned some bash-isms in golfing this one.

Subtracting letters is accepted, strangely. One of my samples in the TIO reads "xy", and apparently $((a-b)) evaluates a to x, and then variable x to an empty string and the empty string as numeric zero, and comparable for b and y. If I set x and y in the environment, those values are used.

Edit: -3 bytes by not putting whitespace after ;;, thanks to S.S.Anne

Try it online! Link is to verbose version of code. Takes input as a list of digits and outputs as a Charcoal boolean (- for a mountain range number, otherwise no output). Explanation:

All results bar the last two must be negative.

-7 bytes thanks to RGS's technique

5 if we may invert the truthy/falsey output (strip the trailing ¬).

Answered by Jonathan Allan on December 15, 2020

With truthy and falsy reversed, this would be 5 bytes:

crossed out 44 is still regular 44

-1 byte thanks to Giuseppe.

-1 byte thanks to Giuseppe.

Computes the signs of the differences of consecutive digits. Then verifies that

A monadic link taking as input the list of digits

You can try it online or verify all test cases.

Takes input as a digit array.

Pi to the power y, for small y’s

Compress your code in an image