I have an isosurface/mesh (generated via marching cubes) of a micro-CT scan. Originally the surface looks very noisy, which becomes prevalent when the mean curvature is visualized: 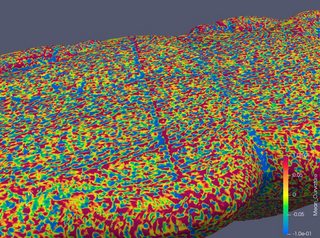 To reduce the noise I’ve applied Gaussian smoothing to the imagedata and regenerated the mesh. This time, artificial looking rings appear: 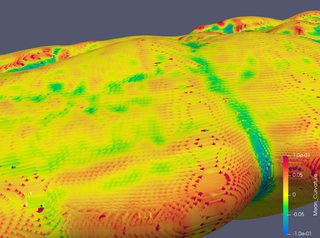 I would like to reduce these circles/rings/terracing artifacts to obtain a more smooth distribution of the curvature values.

I was wondering if anybody would know the name of this problem since I’m struggling to find anything similar online. All help is appreciated!

This is just an educated guess, but the artifacts in your visualization of the curvature values reminded me of Moiré patterns. The images in the Wikipedia article don't show circle patterns like the ones you are observing, but I have seen similar patterns before when I tried to visualize highly oscillating functions. (Edit: The function you are visualizing, i.e. the curvature, is likely not oscillating quickly. However, the following example still illustrates that it may not only be the discretization or mesh generation algorithm that is problematic, but also the computation of the curvature.) 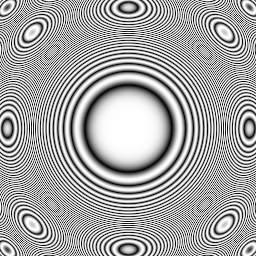 The Moiré patterns appear in this image since the function $f$ is only evaluated at a single point (x,y) for every pixel, although each pixel covers not just a single point but an area. A better visualization of the function $f$ would involve integrating over the corresponding area for each pixel, which would result in a uniform gray color near the image boundaries reduces the Moiré patterns.

My guess is that there is something similar happening in your situation. As for solving your problem, this essentially means that the curvature is computed in an erroneous way if the discretization is too coarse. So you could either try to improve the algorithm that is used for the computation of the curvature or simply use a finer discretization. Unless, of course, if the rings really are a feature of your surface, in which case they will not disappear as lightxbulb pointed out.

In case you are interested, I have attached the C++ code that I used to generate the above image. Note that if you increase X and Y while keeping lX and lY constant, the discretization is refined and the Moiré patterns will disappear.

Why does opengl use 4d matrices for everything?

How can i wrap the earth image around a 3D Sphere using OpenGL, GLFW, GLAD, GLM?

Defining “inside” and “outside” of a 3D space

Performance of Compute Shaders vs. Fragment Shaders for Deferred Rendering

Which perspective projection matrix to use

How is orthographic projection used in computer graphics technically classified as a projection?

OpenGL Framebuffer with multiple Depthbuffers inside

How do you apply a normal map to a 3d mesh?

When unsetting a VAO, should you also unbind the associated VBOs?

Reading from buffer versus calculating on the fly performance

How are textures projected onto 3d models in texture painting applications

Conditionals and branching in shaders

Does atomic functions on same memory location cause an performance issue?

Phong model: why no multiplication by N dot L in specular term?