What is the best layout for a Middle School computer lab?

My school director has given me the opportunity to redesign the layout of our school’s IT lab to better suit my classes. Currently the computers are in the “inverted U” layout listed here so that I can monitor students’ monitors but not their faces.

I find that this makes classroom management difficult (I teach grades 6-9). Students frequently get distracted by what is on their neighbors’ computers, and every student can see every other student’s monitor without much effort. It also makes individual work like quizzes/exams basically impossible. If I have to make an announcement I am making it to the backs of students’ heads. Students have to turn their whole chairs around (we don’t have office chairs) to pay attention to a lesson, which means they can’t comfortably take notes on what I am saying or what I write on the board.

I’m currently debating with myself between three layouts:

A modification to the traditional classroom arrangement that is relatively simple is to replace the straight tables with half hexagon tables.

Place them so that the center seat is facing the front of the room and the other two seats will only need to pivot 60 degrees from their screens to see the front. The students will still be able to look at other screens, but not without being obvious about it. It naturally groups the students into teams of three for when you have team-based assignments.

You can have a pair of mirrors installed in the two rear cournes near the ceiling. In the mirrors you will be able to see basically what they have on their screens. Reading it, or even knowing for sure what it is won't be possible, however, you will be able to tell if it's what should be there. Games and videos will have a totally different look from an IDE, for example.

Set the tables into a normal rank and file arrangement with a gap between each column that allows you to walk between the students when seated. (The gap with students in their chairs will be less than it looks like with empty seats.) In this arrangement you can get to any student's station to assist them when needed. In addition, because of the geometry of the half hex layout, the gap between neighboring students is increased, allowing more room for you to reach the table top without disturbing either student.

Half hexagon tables are available in some different set ups. You can use the standard, non-computer style that may even be in storage already. I've found some online that are designed, nominally, for computer use, and a bit larger to accomodate the keyboard and monitor space requirements better. I've also found one that's designed completly for computer workstations, including a keyboard tray and a cage for the tower. (Links at the end.).

Not knowing the constraints of the classroom itself, I can only give a sample layout. Allowing for 36 students, you could arrange the room similar to this. 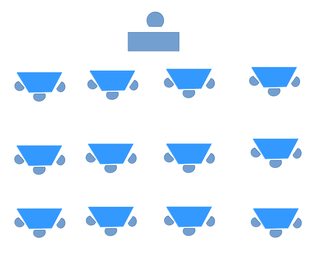 Similar version, sculped to enhance the feeling of "my" space.:

Basic version slightly Modified to have a notch that makes pole-drops fit better: 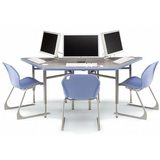 And a personal favorite: 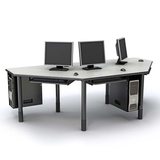 Answered by Gypsy Spellweaver on January 29, 2021

You may address your primary concern with the privacy filters (as low as $7.99 apiece) without changing the layout at all.

If the school director gave you not only an opportunity, but a budget as well, I'd recommend to invest it in good chairs. An ability to adjust height is immensely important.

The features that should guide your classroom layout are visibility, accessibility, and distractibility — maximizing the first two, and minimizing the third.

Accessibility, here, means that I should be able to get to every student quickly, and that students should be able to work with each other when I assign pair-programming tasks or ask them to discuss a question with neighbors.

Those first two considerations already rule out front- or rear-facing rows, and some cluster arrangements as well.

Regarding distractibility: From years of teaching and observing other teachers, I take as an axiom that lecturing to students who are looking at computer screens is an effectively pure waste of time. This has corollaries:

At this point I should give some context about my classes:

Because I have the students turn off their monitors, my lectures must require either no handwritten note-taking, or minimal note-taking (which then requires me to give some explicit instruction on how to take notes).

Now, I have taught in labs with traditional rows (students facing forward, monitors back), clusters, and variations on the "inverted U" design you're talking about. Currently my lab is set up with student workstations all along the left and right walls, so that students are all facing the wall while working, and the computers are all facing inwards — very much like the last option you described, only without a central island (because the room is too small for one). This is my preferred layout.

So, I would endorse the last option you suggested, of computers along the side walls, with an optional cluster of side-facing machines in the center of the room.

Turtle examples for loops and variables, or even something else

What is the best layout for a Middle School computer lab?

Teaching (2,3) and AVL Trees: information in internal nodes or in external nodes?

Are there any lists of concepts in a re computer science?

How can we best inform potential students of the nature of CS?

What and where should I study for competitive programming?

Exercise or example to reinforce idea of functions?

What are good examples that actually motivate the study of recursion?

Any materials on fractional/quotient languages?

How can I design online tests and prevent cheating?

Is there a Java library for testing command line applications?