I am currently going over this paper, and in fact have already tried to implement it:

Paper looks at the amplitude of the step and the time between the swings. ALthough I seem to understand the general idea, I am slightly confused about one of the formulas, which describes time between steps, namely:

"To extract only one valley from a gathered group of valley candidates in a very short time range, every valley candidate is validated by checking the time distance to the recent valley using the following threshold.

Except time threshold obviously magnitude is also taken into consideration.

So I have produced magnitudes that I obtain from my sensor: 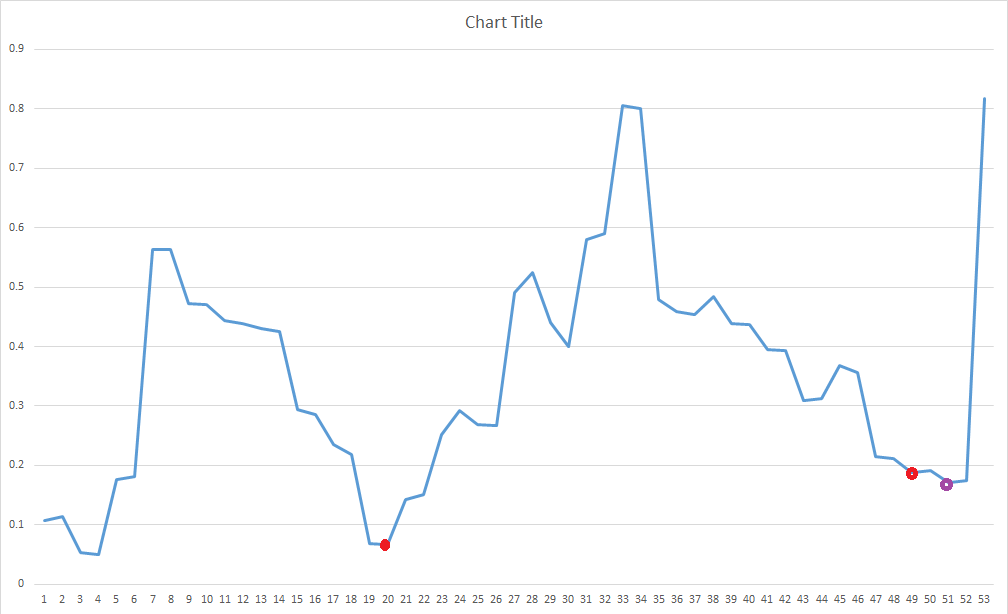 where red dots correspond to initially discovered valleys and purple to points that should re-evaluate last valley.

So what I currently have is something like this:

And calculate standard deviation, which equals $19.09$. So then when I actually plug these values in the formula above I get $Th_v = -41.909$, which should not be possible as I believe this value should be always positive to indicate the time between two valleys.

Am I dong something incorrect or do you have any idea what’s wrong with my or paper’s approach?

I managed to solve the problem of the algorithm by using a different approach. Algorithm is not clear on what is happening with the initial values or how to reliably capture a set of peak/valley candidates and how to deal with them.

Therefore, we decided to use only magnitude part of the paper, which radically simplifies the whole algorithm, and in fact works great ( assuming you are getting reasonable sensor readings).

What are the differences between Earliest Deadline First (EDF) and Earliest Due Date (EDD)?

Design of a synchronized clock

How do you calculate the running time using Big-O notatation?

How private IP address is determined?

Is the discrepancy in Turing’s representation of complete configurations intentional?

Intuition behind the entire (amortized) concept of Fibonacci Heap operations

Counting one’s in a stream of bits

Conway’s Game of Life: Is it really P-complete?

Find original array from array with pairs of adjacent elements