How to test paired observations

I have a set of data that look like this:

If Spray A is the original, we want to know if Spray B, the new one, is “better”. A higher average number indicates better.

So B appears better at first glance. But, if I wanted to apply a hypothesis test where Ho is that there is no difference with a threshold of 0.05, how would I do that?

Each observation took place in a different city. Does that impact the choice of test? A paired t-test perhaps?

I have done a chi-squared test before, where I’d input the means only. But what would be the right hypothesis test to use here to determine if the higher mean from Spray B is sufficiently different enough to reject the hypothesis?

Yes, the fact that measurements are paired, in the sense that there are two measures for each city over a set of cities, means that your data are not independent. The lack of independence violates the assumption of the independent samples $t$-test. A paired samples $t$-test is an option here.

However, you don't have much data, and the paired samples $t$-test assumes that the differences are normally distributed. Your differences don't look very normal in a qq-plot: 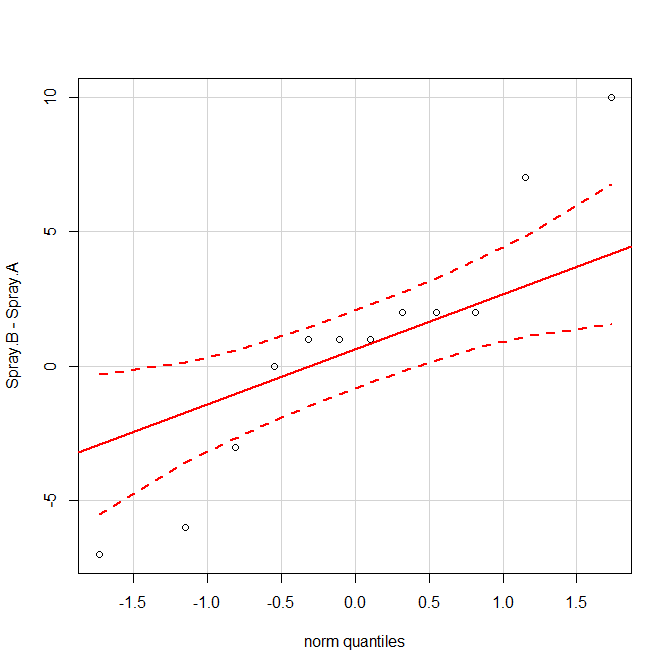 Thus, you may prefer an nonparametric option instead. The nonparametric analog of the paired $t$-test is the Wilcoxon signed rank test.

Running these tests in R is straightforward:

The Warning messages are nothing to worry about. As explained in the documentation, these are stating that the exact $p$-value could not be computed and so the reported $p$-value is based on the normal approximation.

Fixed effects versus random effects in panel data for intervention group only? Change in dependent variable for each time period

Compare RMSE for the same model but varying sample size

What are the worst (commonly adopted) ideas/principles in statistics?

Statistical Analysis over different samples – Prediction for the number of objects

Learning more about glm parameters, how to dig deeper?

OLS regression interpretation when sample means from t-test are insignificant

Can we compare the effects of continuous covariate and categorical covariate on response variable in generalized linear regression?

what is Multivariate Data

Why LIME does not show the attribution for each features

How to find the 95% confidence interval when there is outliers?

Is it useful or even necessary to standardize independent variables for linear regression?

Why and under what conditions does Q learning converge?

How to factor this conditional probability?

What are some good resources to learn Statistical Genetics?