Why are my coefficients too large when control variables are not added?

I am doing a difference in differences analysis with staggered treatment time. Since the treatment time is different among subjects, I made my matrices look something like this from this post (Dynamic treatment timing in a panel-DiD framework). Here, the ‘policy’ treatment occurs on firms in different time periods so the ‘post’ column differs by subject. 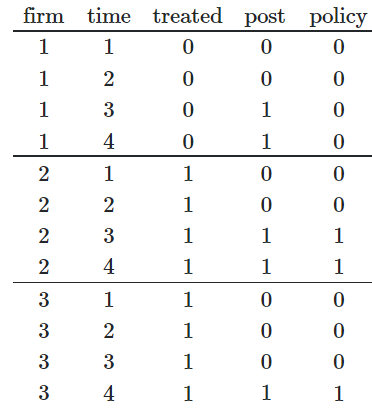 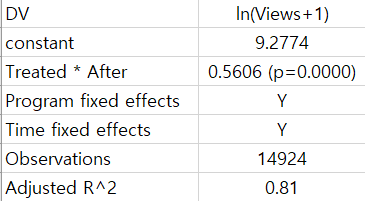 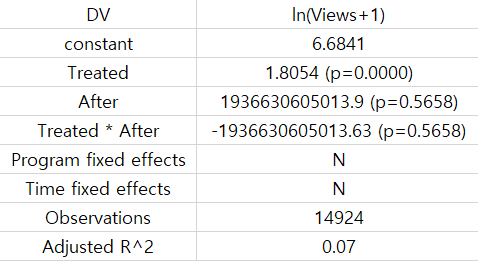 I am confused because the coefficients of beta2 and beta3 are really high, even when my variables are not skewed.

Does anyone know why this happens?

+)
I added how the data looks like. The excel sheet shows the view counts, whether if the program is in the treatment group, whether it’s treated in the particular time period, and starting from ‘p_0’ are the fixed effects. (A lot more control variable dummies are omitted on the right side of the image. ) In this case, the particular program is treated in 2019-12-23, but this treatment period differs from programs. The programs in the treatment group are treated at someday in December 2019, and the programs are observed until February 2020.

Your analysis is not suitable for the "classical" difference-in-differences (DD) approach. It is, however, amenable to the "generalized" DD framework.

Here is your model:

where you observe programs $p$ across days $t$. $gamma_{p}$ denotes "program" fixed effects. $lambda_{t}$ denotes "day" fixed effects. Your dataset would include a series of $P-1$ indicators for programs and a series of $T-1$ indicators for days. This might be a lot of dummies to append to your data frame, so I recommend letting software do most of the heavy lifting for you in terms of estimating your program and day effects.

The policy dummy $T_{pt}$ should equal 1 in all 'program-day' combinations where the policy/treatment is in effect, 0 otherwise. This, in essence, is your interaction term (i.e., $T_{pt} = text{Treated}_{p} times text{After}_{t}$). I do not recommend interacting the constituent terms in this equation. Rather, create the interaction variable manually. In other words, if a program $p$ is treated program and it is in the "after" period then set it equal to 1, 0 otherwise. For programs never treated, they would be equal to 0 in all days. Note, this is the equivalent to the policy variable in your toy example. It is also equivalent to the Treated*After column as indicated in your data frame. Again, simply regress your outcome on a full set of program dummies, a full set of day dummies, and the policy variable.

I actually think you understand the "generalized" DD framework well. I think you're caught up on why the DD coefficient in this setting does not mirror the DD coefficient in the "classical" setting. In the "classical" DD framework, you must have a well-defined before and after period. I am surprised software returned a DD estimate for you in your second run. Think about why this wouldn't work. In the "classical" case, your $text{After}_{t}$ variable should be coded 1 in the post-treatment period in both treatment and control groups. It would represent the simple passage of time for the control group in the absence of treatment. But you don't have that here! In fact, your $text{After}_{t}$ period indexes days when treatment 'switches on' for treated programs. Thus, when $text{Treated}_{p} = 0$ and $text{After}_{t} = 1$, what is the before and after change? If I am correct, the values would be 0 for all control programs (i.e., never treated programs) in the days before and after treatment. Or, suppose they aren’t all 0’s. What is the “after” period for control programs? If I am making any sense, then it should be obvious that the “after” period is not standardized; treated programs ‘switch on’ early or ‘switch on’ late. In sum, $text{After}_{t}$ should not be used in the latter (base) model. The "after" period is clearly not well-defined in your setting; it varies across programs. You must proceed with a "generalized" DD approach.

Remember, you created the $text{After}_{t}$ variable so you could interact it with $text{Treated}_{p}$ and obtain your policy variable (i.e., $T_{pt}$). But that $text{After}_{t}$ period is not the post-period we use in a "classical" DD analysis! In staggered adoption settings, eschew the standard approach and proceed with the "generalized" DD equation I specified above. It is more versatile and will handle irregular treatment exposure periods.

Why not use % change in regression instead of log diff?

Should multiple testing correct with bonferroni ever reduce a p value’s size?

What is an example of perfect multicollinearity?

Should I use a seasonal arima or stl decomposition and model residuals only?

Should we really do Re-Sampling in Class Imbalance data?

How to determine data size is statistically efficient?

Confused about stationarity and ARIMA processes

How to remove correlated features?

How can I separate the abundance factor of the incidence results?

How to make correlation test with compositional data?

What are the parameters in signal recovery? Whether source of these parameters are the sampling property of impulse response?