I came across an IC device configuration & security flow and the details are illustrated in image below.
I’m wondering must the ECDSA pair with the SHA Hashing function?

Alternatively, what if using the AES-GCM to generate both CIPHER & TAG? The GF generated TAG later go through the ECDSA to be encrypted with the private key.

So from the decryption side, it exactly work the same like the image except replacing the SHA engines with the AES-GCM engine. I’m wondering why this is uncommon in all the industry practice? 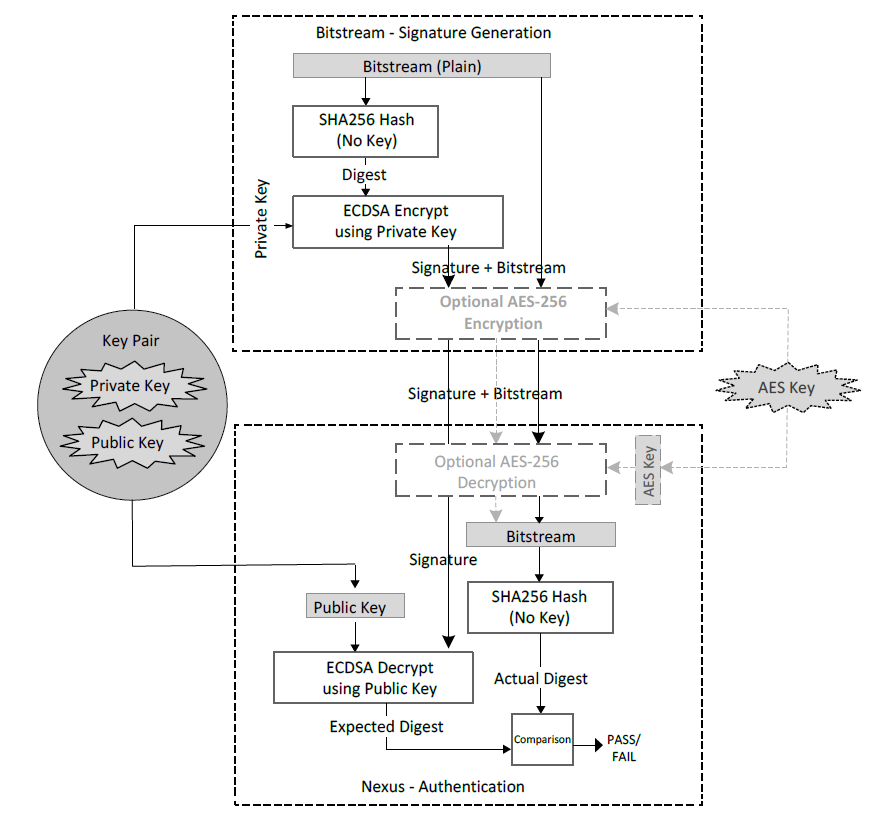 Cryptography Asked by Pi-Turn on December 28, 2020

I will first address the issues of the diagram;

Although the encryption is mentioned as optional

I'm wondering must the ECDSA pair with the SHA Hashing function?

They didn't show which curve is used there. If a curve like P521 or Goldilocks is used the one may need XOFs like SHAKE128-512 series, or use SHA256 as CTR mode to generate more than one block to support all of the curve needs.

Alternatively, what if using the AES-GCM to generate both CIPHER & TAG? The GF generated TAG later go through the ECDSA to be encrypted with the private key.

Is the AES key public? If it is, then it is easy to generate two messages that have the same tag (and hence would act like a collision).

If the AES key secret to both the signer and the verifier? If it is, well, why bother with ECDSA at all; if you have a shared secret key, you can use a Message Authentication Code (e.g. HMAC, CMAC, GMAC) which is far more efficient than ECDSA (or any other public key signature operation).

A modification of the Blum-Micalli construction

Would Triple DES-X with 7 keys be much slower than standard Triple DES?

Can someone help me understand this?

ZKP for product of two primes

How does second pre-image attack on Merkle Signature Scheme work?

How do herding attacks on hash functions work?

How to implement arbitrary s-box in a side-channel-free way in C?

Should I use self generated or predefined RFC 7919 DH groups?

What’s the least computationally expensive way to verify a message is from who they say they are?

Is there any examples of information-theoretic secure MPC for dishonest majority against malicious adversary?

Are the asymmetric roles of the two keys in the elliptical curves the same (as for RSA)? Can they be interchanged indifferently?

Proof of the Diffie-Hellman Key Exchange