If I wanted to make a scale model plane that looked like a real aircraft, could I just scale down all of the measurements of the actual aircraft to make a model aircraft with similar flight characteristics? If not, what is the reason?

Yes, but a certain amount of surface area is required for the air to come across the wingbody. As an object decreases in surface area it's propensity for airflow decreases with it, that's why paper airplanes don't fly very far unless the wing surface is sufficient to capture a steady air quantity.

For a given constant global density, mass grows with the cube of the linear dimension.

Elaborating on @Robin's answer with the full effects of the cube-square law.

If we were to construct a model aircraft at half the length of a full aircraft, the model would:

Where this becomes more difficult is in applying this to gain an understanding about the characteristics of our model aircraft.

Most aerodynamic equations include a speed squared term. If you half the speed, you only get a quarter of the lift and drag

But this is a simplistic way of looking at things, consider the full lift equation:

For our model to stay in the air, it needs the same lift to mass ratio as the full size aircraft. But remember the mass has decreased by a factor of 8, so we only require a lift that is an eighth of the original lift force. Assuming the lift coefficient and the density of air stay constant, we need to adjust the speed and wing area.

Mathematically we can show that the required velocity for flight is roughly 70% of the velocity of the aircraft, greater than a clean multiple of a half would suggest. 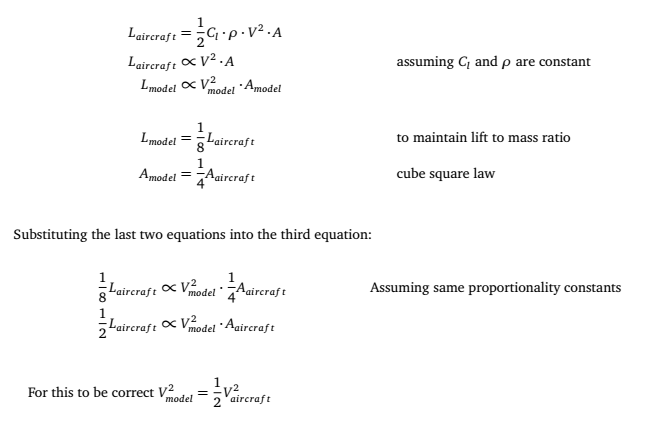 Aircraft do not scale linearly, for a number of reasons.

If (as Phil suggests) you scale weight and power by 1000 (10 cubed) it would weigh 5-6lbs and have 1-2hp, which is close but still heavier and more powerful than real models: