I’ve plotted my data log(GDP) which displays an albeit small upward trend. 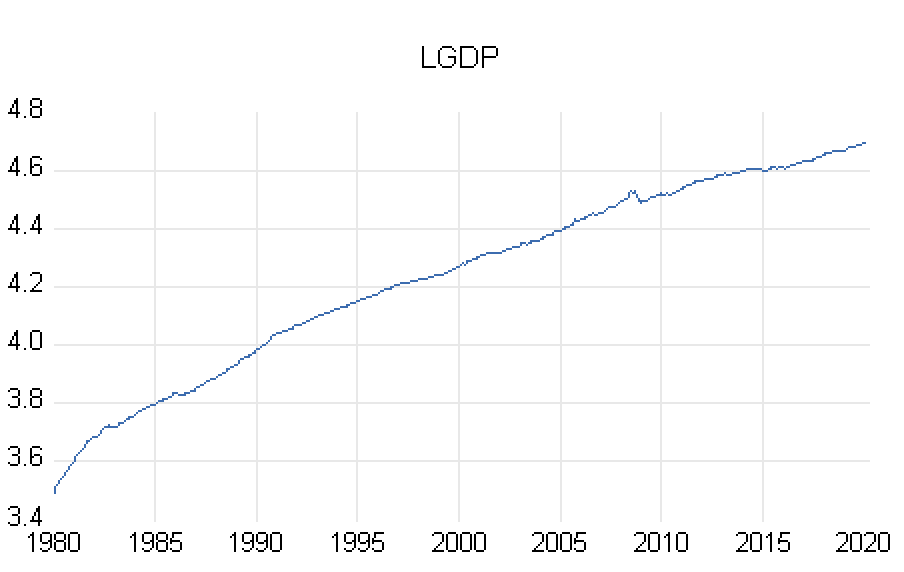 However, after performing an ADF unit root test log(GDP) it suggests that I can reject H0 [that there is a unit root] at the 5% level. I tested the level effect with trend and intercept due to the nature of the graph. Both the intercept and trend are statistically significant and removing the trend only makes the t statistic lower so that you can reject H0 at the 1% level. 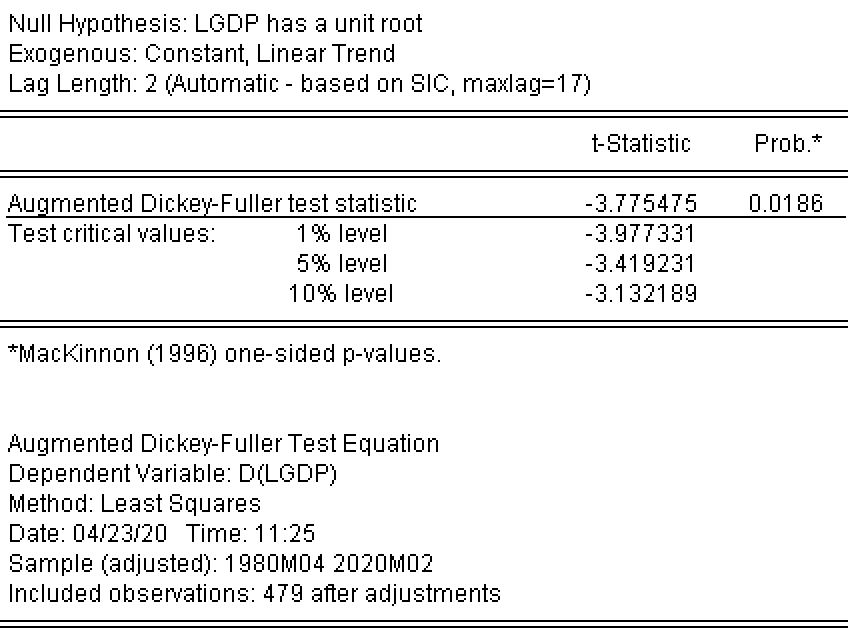 Why might I be getting this result as from the graph the data definitely looks nonstationary.

To help you better understand it is possible to illustrate this with a simple model with a lag and a trend (this also generalizes for two lags but it is good to keep things simple). Consider the following model of GDP:

Long story short if you include the linear trend in the test even if you exclude it from the estimated regression model then you are unlikely to find evidence of a unit root in an empirical process where a linear trend dominates unless the data were even more non-stationary than it appears.

On surface level there does not seem to be anything wrong with the test.

Also, even if you do everything right you might still get significant result even if we know that GDP should have unit root. This is statistics - the test is not some sort of truth checking machine it is all based on probability. For example, with p value 0.0186 even if your test has power 1 you would expect about 2 false positives out of 100 tests. Moreover, you definitely won’t have 1 power and with ADF test you usually need a lot of observations to get to 0.8 power which is considered good so the probability the result is not correct is even higher. You might want to try to run some alternative unit root test with null of stationarity and alternative of unit root (for example KPSS test). In any case when building some regressions I would always assume that GDP has a unit root due to overwhelming evidence from other studies and not just rely on the unit root test.

Need help with Wakker (2010) on arbitrage

Why does fiat money have value?

What was the “invariable measure of value” problem and how did Sraffa solve it?

Why do high earning multiples imply a likelihood of low or even negative returns?

Why would banks not want to lend, under Federal Reserve’s Main Street Lending Program?

market for lemons with signals – equilibriums vs constraints

What does Eugene Fama mean “variance of price changes over multiple days should be less than the multiple of the variance over a day”?

Balance of payments and the free floating exchange rate system

Why is money in circulation a liability of the central bank?

Relation between demands of $x, y$ and $z$

Can implicit costs make every option not worth doing?

How does John Stuart Mill distinguish between “wealth” and “riches”?

Is Currency Devaluation a cause or effect of interest rates?

Does working abroad cause less unemployment? Or is it actually harmful (directly or opportunity cost)?