I have a 3V3 rail and want to run an LED with a Vf=3.1V at 10mA with a constant current source. I’m used to circuits like the one below but the problem is that I only have 200mV of overhead and discrete circuits I am familiar with count on the 0.7V Vbe, which would brown out the LED.

Can anyone provide a constant current circuit using cheap discrete parts that can provide 10mA with less than 200mV of overhead? I am familiar with specific LED drivers or circuits that use OpAmps but they seem like engineering overkill to turn on an LED. 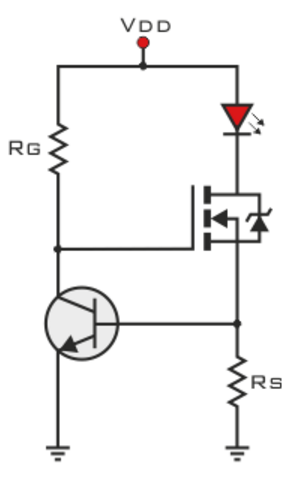 I came up with this circuit in trying to come up with a cheap LED flashlight for poorer people. The inexpensive flashlights tend to just use a resistor only, and would waste too much power (money) for those who only make a dollar or two a week. I finally settled on 2.6mA as the minimum usable light level, which I've been using for a few years. I've changed the batteries once, and they seem to last forever. I do believe that the overhead of this circuit is about 200mV, which is what you wanted. Replace R9 with a trimpot or a potentiometer to make it adjustable, or to find the actual value of the resistor for your particular LED. Remains fairly stable in the temperature range that I expect a flashlight to operate in, but it might not work well in Alaska or Death Valley, and need the trim-pot instead of a resistor if your product goes world-wide. 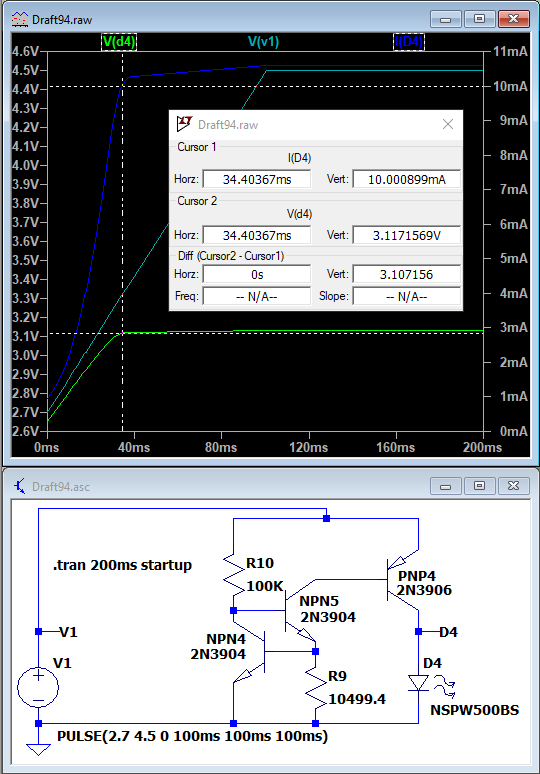 Answered by MicroservicesOnDDD on December 10, 2020

You could use something like the below, which requires less than 60mV of headroom. Sense voltage is only 50mV so the offset voltage of the op-amp will tend to greatly affect the current. The LED could be controlled by connecting R3 to a port pin.

Note that if your supply is nominal 3.3V and your LED nominal 3.1V Vf you still may not have enough headroom if the LED happens to be on the high side and your 3.3 turns out to be on the low side.

Programming a Microcontroller – JTAG and SWD

Find potential difference between nodes A and B in circuit below

Why is the Digital 0 not 0V in computer systems?

Does an AC lightswitch dimmer/light combination consume the same power no matter its setting?

Separate grounding for analog and digital portions of circuitry

I need diodes to build a R-2R ladder DAC from original TTL chips (not Arduino) don’t I?