In a typical resonant bandpass filter, resonance is set as none at 0 and full at 1, such that the filter rings infinitely at 1 and not at all at 0.

If there is a two-pole resonant bandpass filter, with an impulse excitation to a maximum amplitude of “1” and resonance setting between 0 and 1:

What is the mathematical equation that would allow you to predict the decay time of the resonant filter based on its resonance setting? For example, to an arbitrary level of “1/e”? ie. To 36.7879% its original amplitude?

Thanks to some good answers below, I now better understand the problem as follows:

Thanks again. This has been very informative and I think this should be a clearer and more answerable question.

Andy's answer is good, but it can be generalized. For the transfer function:

the inverse Laplace for all of the three mentioned cases have the same exponential decaying term in them:

That will be the envelope of the whole response. The rest of the time response is either of the form $sin{t}+cos{t}$ (oscillating, for underdamped), or $sinh{t}+cosh{t}$ (for overdamped), or a fixed term as a function of time, involving $omega_n$ and $zeta$.

If you really want them in full, here they are:

If you need to find the time when the envelope (alone) reaches a certain value x, then it's as simple as:

Update: This is only valid for the underdamped case, as there is a clear case of an oscillating term -- cos()-sin() -- multiplied by an inverse exponential. For the other two cases, it's impossible to do it analitically, as the time, t, is in more than one term, and that term is not oscillating, but either linearly variable (critically damped), or exponential (overdamped), so simplification is not possible. Also see the last pargraph.

Don't forget that, in all three cases, there is an additional term that can be factored out: $2omega_nzeta$, which gives the amplitude of the initial decay.

Caveat emptor: the shape of the decay will not correspond to the final result in the case of $zeta$>1, due to the hyperbolic functions! If the sinh() term would have been just like the cosh() term, the whole expression would have been reduced to an exp(-t), but sinh() is multiplied by $frac{zeta}{sqrt{zeta^2-1}}$, which means that the whole cosh()-sinh() term will "explode" if it were all by itself. Being multiplied by the exp() in front limits the response, but the envelope is no longer the same (contrary to the underdamped case). Here is what I mean: 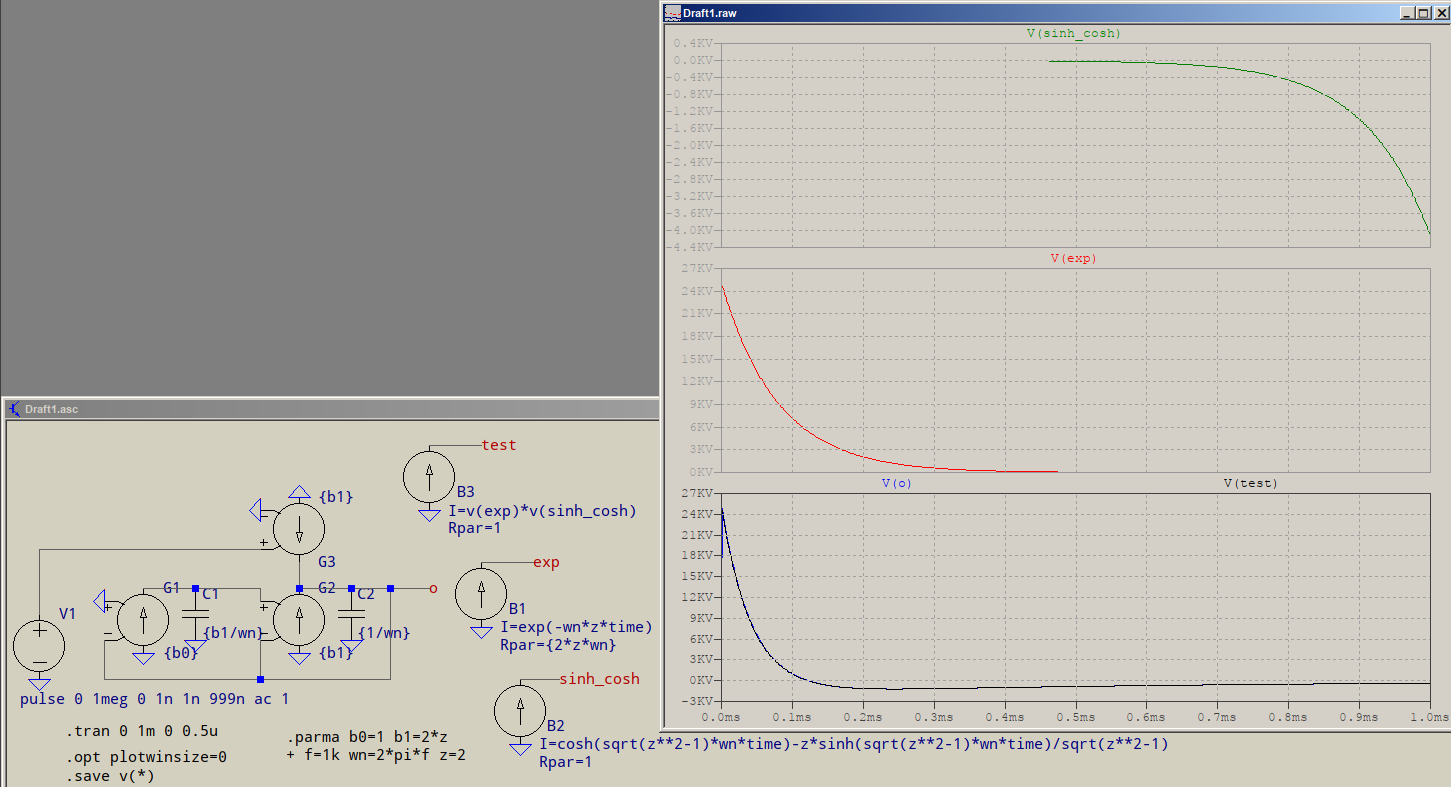 G1, G2, G3 together with C1, C2 form the bandpass filter having V(o) as the output. V(exp) is the exponential decay (together with the $omega_nzeta t$ term, see Rpar=2*z*wn in B1), V(sinh_cosh) is the cosh()-sinh() term, V(test) is the multiplication of the previous two, compared with V(o) in the lower-most plot (they are the same). The upper two plots show the individual responses of the envelope and of the hyperbolic term -- this is what I meant when I said it "explodes", it goes to $-infty$. And here is why I said that the envelope will not match the response, only by itself, due to the hyperbolic term:

Neither the output (blue trace), or its absolute value (black) will match the envelope alone (red). Which means that the solution above will not work, and the whole expression of the impulse response has to be considered, which means that, sadly, you're out of luck, since the expression contains the time, t, in both the envelope and the hyperbolic term. Even if you were to equivalate this with its equivalents, cosh=[exp(-x)+exp(-x)]/2 (minus for sinh), you cannot apply a logarithm to each exp(), only as a whole, which means the time cannot be extracted analitically, so you're stuck to numerical methods.

Answered by a concerned citizen on December 13, 2020

A band pass filter would typically have a transfer function like this: -

And $omega_n$ is the natural resonant frequency of the filter.

To convert this to the time domain (due to an impulse response) there will be three time-domain solutions: -

There is, unfortunately not a one-size-fits-all solution. Life gets easier if you set $omega_n$ to 1 and then look at the inverse Laplace table for the three scenarios.

And, using inverse Laplace tables you find the solution as: -

And this inverse transforms to: -

For an overdamped situation where for example $zeta$ = 2 you get: -

And this inverse transforms to: -

You can use this really good interactive calculator instead of tables should you wish: - 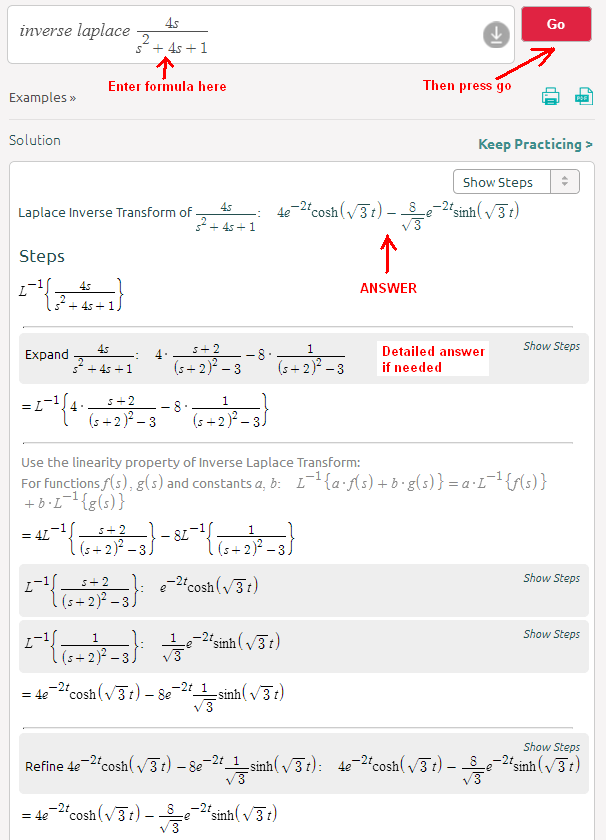 What is the mathematical equation that would allow you to predict the decay time of the resonant filter based on its resonance setting?

The above formulas are the only ones I can recommend.

I think I've got it worked out using "bandwidth" in octaves as my primary control point, but would appreciate if anyone can check my work.

According to wikipedia, the Q of the filter can be calculated as follows:

Again according to wiki, Q then represents the number of oscillations to reach e^-pi relative to original amplitude.

Thus: Q/fo = time in seconds for the filter to reach e^-pi amplitude.

I am interested in calculating time to reach 1/e amplitude. So I would then just need an equation to describe the general amplitude decay.

Would amplitude decay over time follow a curve of y=1/c^x?

This will then tell me the time to reach amplitude 1/e at the given bandwidth setting, which is what I want.

It really simplified to something very easy and elegant. Is this correct? Or did I screw something up in my reasoning or approach?

How to reduce measuring angle of JSN SR04T?

N-channel mosfet turn constantly on after a while

Am I calculating battery life expectancy correctly for this RF receiver?

Introducing SiPM Array to an Op-Amp

Arduino Mega output at 2.5 Volts and how to pull-down?

Sending SPI signals to the Flash Memory through verilog FPGA controller, but not receiving anything from it, why does it happens?

Adjusting the offset of the output of a UA741CN opamp

Is unplugging computer power cable from PSU the same as electricity outage?