I am having a small 2.5cc methanol 2-stroke engine that I am building an electric starter mechanism for. From my research I was under the impression that for a 2-stroke engine like the one that I have which is completely mechanical using a port for fuel intake it should not matter what direction I am starting the engine, it will just continue to move in that direction.

Image of the engine: 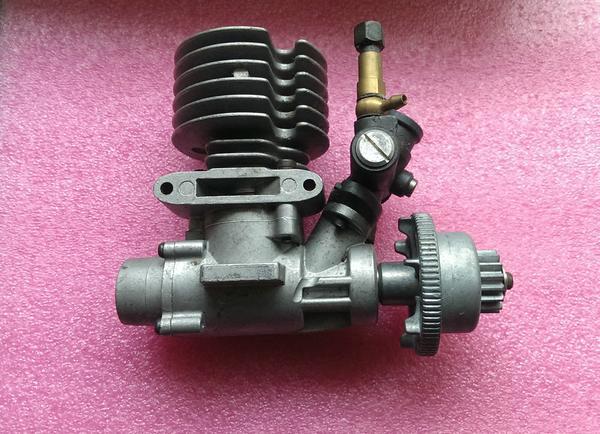 In order to make sure my DC motor used to start the engine is not suddenly "powered" by the much faster methanol engine I am using a one way bearing on the gear connected to the methanol engine. When I did a test run I could hear the methanol engine engage (due to the noise), but it cut out practically immediately afterwards and I could see kinda heavy abrasion on the gear of the DC motor (it is 3d printed, not some metal gear). I am getting the feeling that the methanol engine starts but wants to turn into the opposite direction of how it got started and then dies out pretty quickly because of the resistance.

This goes contrary to my believe that these 2-stroke engines should be able to run in any direction. What are the parameters that influence this for an engine and how would I go about determining that direction except ruining my starter gear and do it empirically? How does this work with a pull start, i.e. how do they ensure that the motor never engages in the other direction?

I have finally completed the starter mechanism for the RC engine (not the one in the picture, but a vertex .18 engine). I can add another anecdotal evidence, that the engine turns counter clock wise (seen from the front/output shaft). I could not get it started when using a clock wise starter.

Answered by Yanick Salzmann on December 30, 2021

Calculating angle of a 2D vector with positive y-axis

Laplace transform and output of affine systems in Simulink

Is there a loss in light transmission when using acrylic lens, instead of glass, for collimating a led light beam?

Calculate the specific surface area of a mesoporous sample

How to choose bracing type and location

Can changing the colour of roofs change the average temperature in a suburb?

Motors for an omnidirectional RC toycar (with mecanum wheels)

Is the identity matrix a tensor?

What would happen if I tempered aluminum of aeronautical use (Al 2024)?

Are there tools to select the best material based on their functions?

Yellow/Purple Flue gas in the stack

Can air flow occur in both directions in a 2 way solenoid valve?

Did toasters ever make the toasted bread jump up in the air when done?