What type of grit separator can be installed between the inlet works and bar screen of a wastewater treatment plant?

Engineering Asked by NamSandStorm on September 1, 2020

An existing sewer treatment plant is experiencing maintenance issues with their first stage (bar screens) where grit which is just barely larger than the apperture (bar spacing) of the bar screens gets jammed in between the bars.

I have been tasked to solve the problem. It was suggested to install a grit separator upstream from the bar screens. The conventional approach is to provide grit separation downstream however.

I could not find a solution in my normal literature (Metcalf & Eddy & MWH) and google, so am asking the question here.

If grit separation can be done upstream, what type would be used? I assume that it would probably employ a vortex type system.

The OP wrote they use a Huber screen. Huber often uses bars that are hydraulically optimized bars with a profile like the left one in the picture: 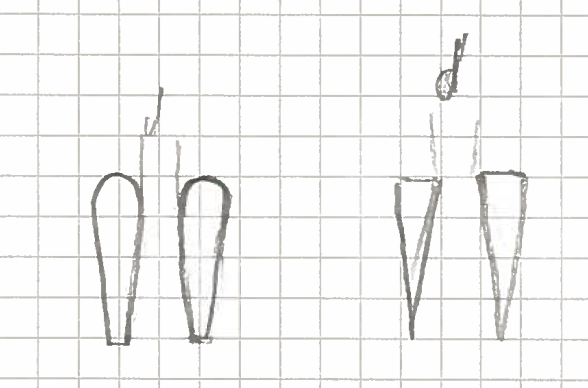 These have a slight funnel effect, so if d = 7mm, a particle with ~8mm size in one direction can get stuck in the part between the rounded tips. I suggest talking to Huber if you can replace the bars with a different form, the wedge shape on the right. This removes the funnel. I have not seen the hydraulic coefficients for these wedges, but according to the what I'Ve read the downstream end is the biggest influence on flow resistance of the bar so the wedges could be okay too. I don't know how constrained you are hydraulically.

I would also check the rakes: It should be so that one rake clears every other space (say space 1, 3, 5), alternating with the following rake (which cleans 2, 4 ,6 ...) so the bars can bend slightly. Also if the rake gets stuck, it should reverse and to try to dislodge the blockage. All of this is, AFAIK, standard with every rake manufactuer and certainly Huber so it should be implemented on your site.

I beleive a modification to the screens should be the first thing to try, because - like you - I don't see a viable alternative. You can have a screen upstream, but then you might as well replace the screens you have. You can try to sediment the large particles, but then you build a second grit separator. I beleive cyclones to be too energy intensive for a wastewater stream and maybe not robust enough for unscreened wastewater - screen waste is mostly tissues (at least where I am), I could imagine those blocking a cyclone or its pump.

The other idea I might consider would be to have a calm, low flow channel upstream of the screen to separate large grit <7mm - maybe just two wide channel with a small weir at the end, to be cleared by with a Bobcat every year or so. Not knowing the site and hydraulic conditions, I don't know if this is viable.

Technical term for loose drawers jamming more readily than those with tighter clearance?

Precision of a steeper motor and gears vs multiple motors

Does air flow rate of an air pump imply the same rate when using it to pump water via air pressure?

A mechanical system with coupled oscillators and dampers

What Causes Asymmetrical Buckling in this structure?

How to calculate beam impact problem

Pressure loss of a shape change of an ar duct, keeping the area the same

What does the class 6H represent in a hole?

When using an o-ring as a face seal, are the faces flush together?

Why is the direction of pressure always perpendicular to surface area for fluids?

How much an unevenly heated glass plate bows?

Is there a way to quantify the amount of radiofrequency interference?

Can Sheet Metal Be Formed With Bends At Weld Joints?