Apple tree - Is this a disease?

Started noticing this from last summer(December, NZ) and now getting bigger. Had a good harvest last season, but, getting worried 🙁 any information on what it is and whether to treat it or not will be very useful. 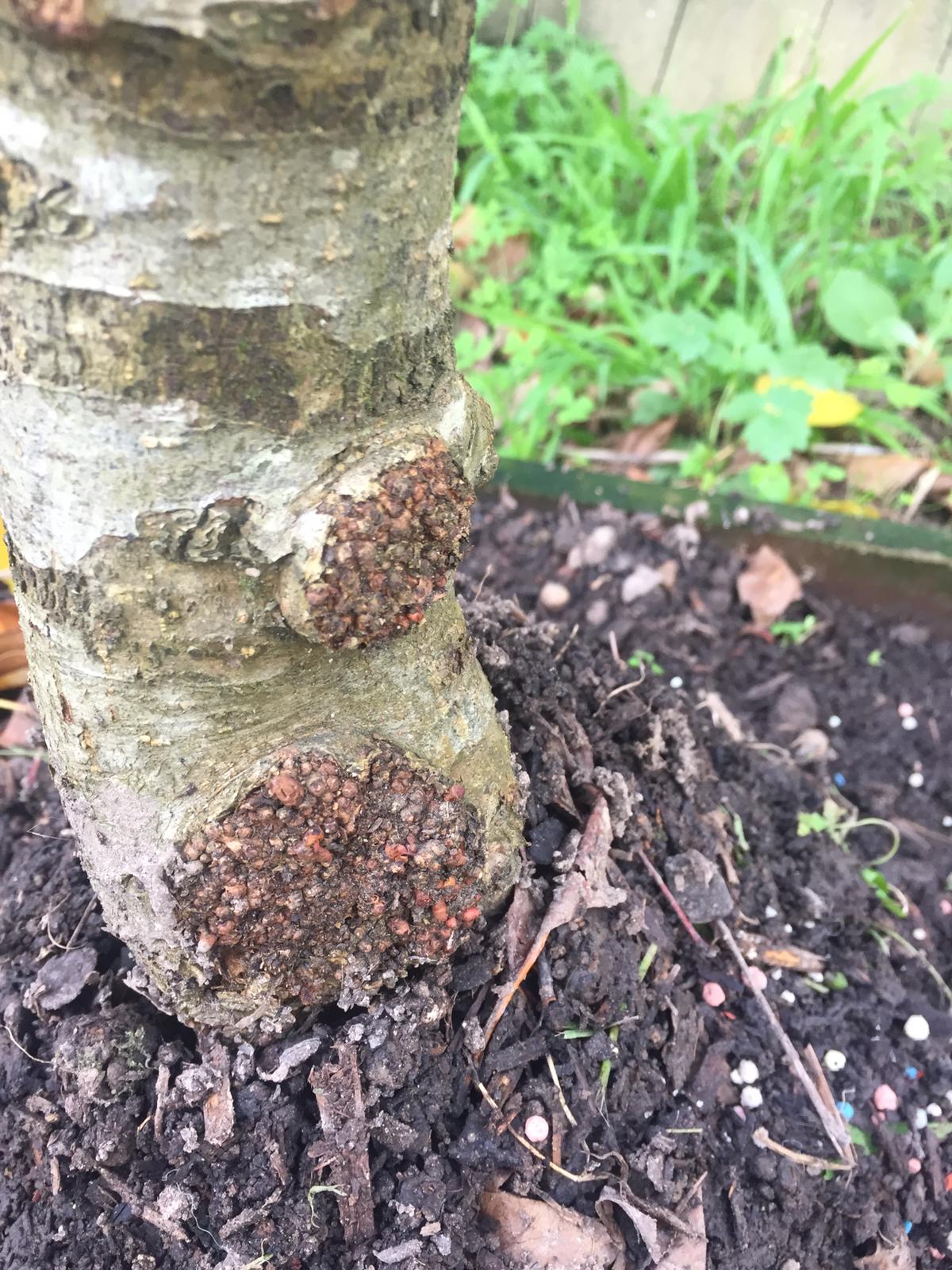 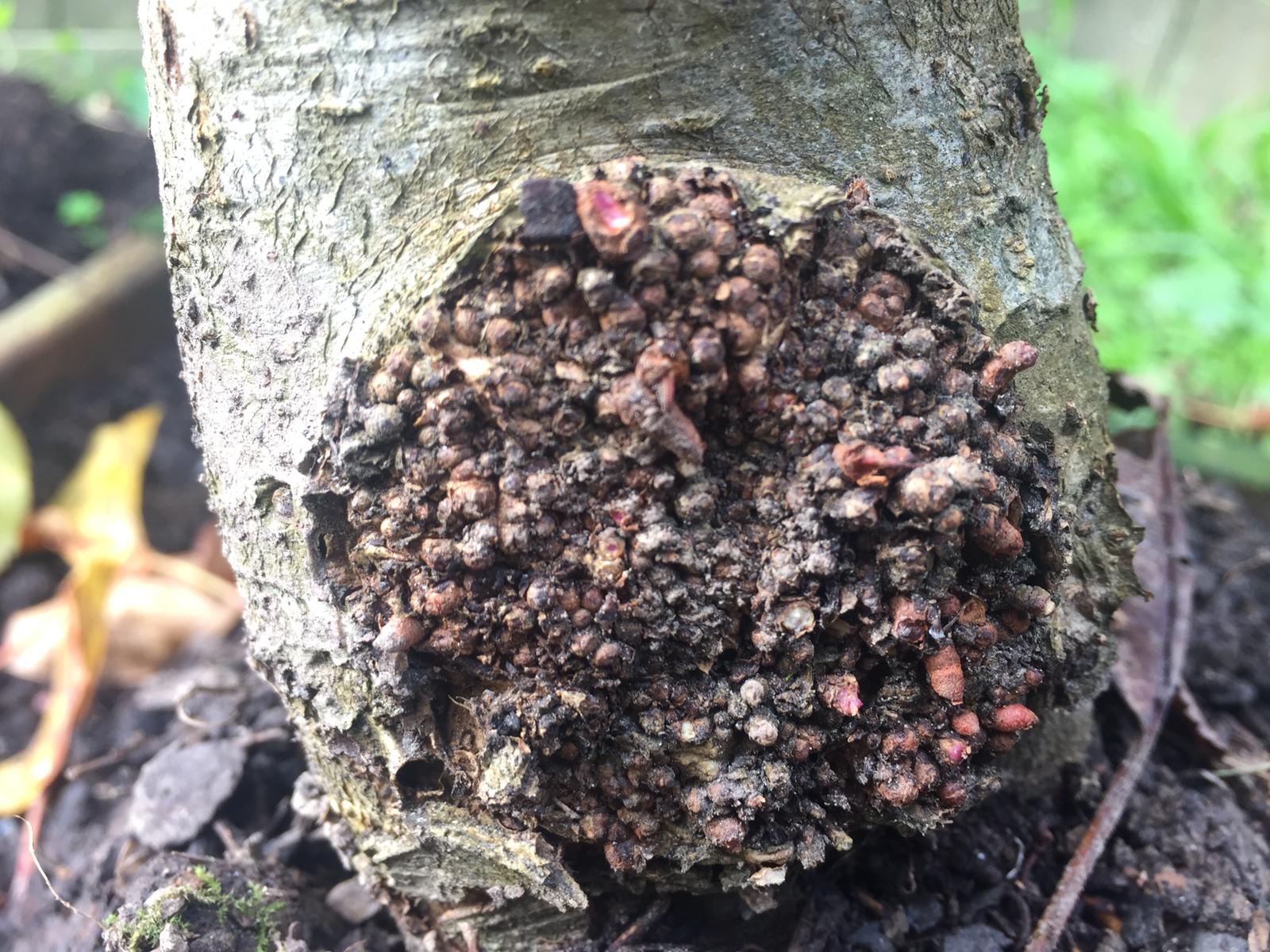 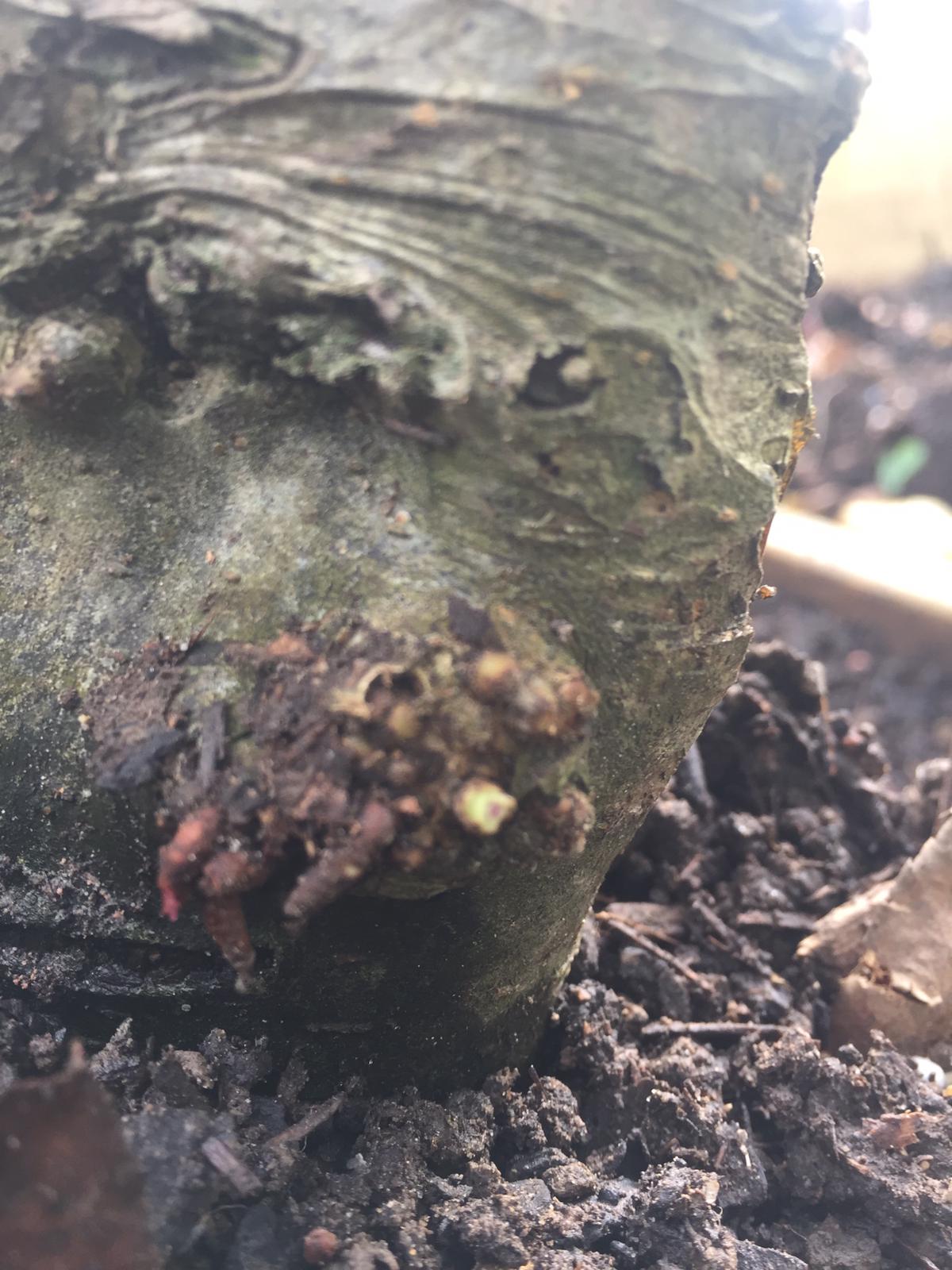 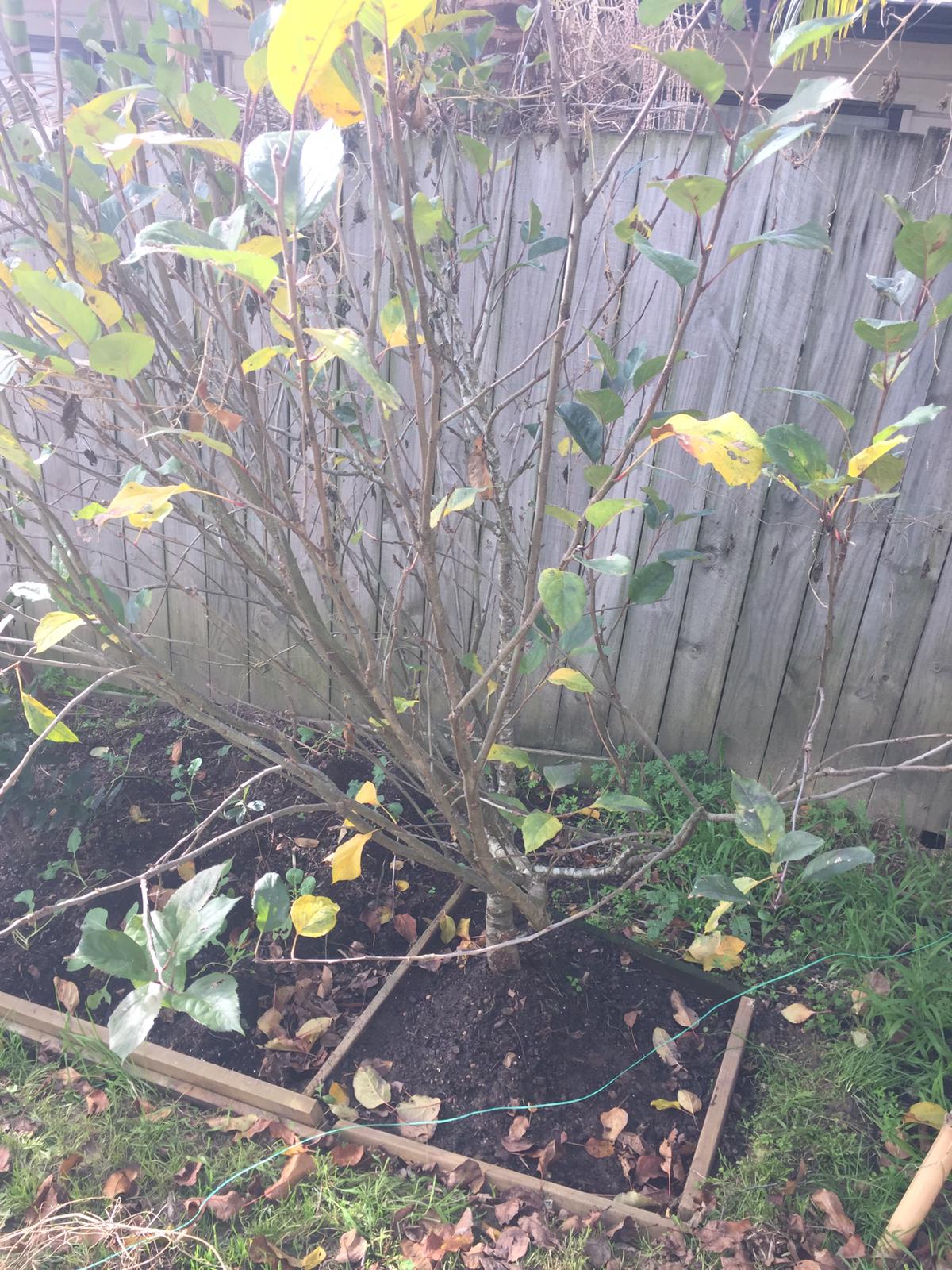 Good question and illustration, and the excellent closer view illustrations are very helpful! An older illustration could be helpful for comparison to see how the features are changing as they form. The condition appears to be from rootlet arrays forming. Apple Gall can sometimes outwardly appear similar at a certain stage.

Based on the additional illustrations, it seems less likely that it could be from Apple Gall, which although blocks flow of nutrients up & down the tree, as long as there is still enough nutrient flow, as in well established trees, a tree can continue to survive & produce good apples. In such cases, general care to help a tree do well is mostly all that can be done, and gall can remain in the soil at such locations for some time. Avoiding any abrasion to seedling roots and avoiding inadvertant abrasions to trunks and branches reduces occurrence of Apple Gall.

The features on your Apple Tree appear to be from new roots/ rootlets attempting to form! The location near the soil, nice roundness, and slight extrusion of adjacent bark tends to indicate this. Such features block transfer of nutrient up and down the tree, but since the features are one ablove the other, there's less total interference with nutrient flow than if they weren't. An apple tree can do quite well with such features; sometimes such rootlets can grow a bit & even resemble small little carrots. Some of the little nobbins on the lower feature appear in the illustration to be more developed than others. And especially if the lower one is the older of the two features, that may indicate that the features are from arrays of rootlets forming. Some suggest carefully removing such rootlet arrays, & then stimulating adjacent bark to grow over. However, that could require several years to do so fully, is quite a bit of stress on a tree, & also opens a tree up to things such as gall, even when (of course) doing so very carefully. So, if it's from rootlets, maybe suggest that as long as the features don't take up say, over 40% of the circumference(& over 40% of the nutrient transport), maybe leave the features be, though keep track of them. Some apple varieties are more likely to grow rootlet features than others.

**Addendum: If decide to try remove the rootlet features because of increasing effects on nutrient flow, would wait until early spring, since doing so will stimulate new growth, rather than prior to dormancy. Wouldn't recommend using paint on any on them, and it's important to try have new growth cover over the location to restore nutrient flow tissue up and down the tree. If there's a known locally effective material to put on to prevent infection, then sparing use of it might be good.

**Also, it 's important to, if possible, determine what the local persons were recommending treatment for: maybe they were recommending treatment for Apple Gall. If the tree is a graft, some varieties have tendency to grow these features more than others. The lowest one might actually reach the ground, and soil height is a factor then. Apple Trees Can be airlayered though, so that could open some possibilities. The two larger ones don't seem to be thriving rootwise, so would be candidates for removal first: wouldn't recommend doing all three at the same time because of stress on the tree! Removal of the upper one first might be most effective, since the tissue around it seems active, and it would improve nutrient flow. If that one could be closing over ok with healthy nutrient transport tissue, then maybe would then do the largest one.

**Maintaining new tissue growth stimulation would be important, or otherwise the nutrient transport blockage & effects would still remain, and would be an investment of time to only have stressed the tree. Before proceeding, would check again with the local place that they were suggesting treatment for rootlets forming rather than for gall, and would wait until the beginning of the next growth season before doing it. In that time, would also be able to gather materials and information on grafting and overgrowth stimulation etc. This sort of procedure/endeavor is sometimes seen in bonsai situations where a new higher up root is wanted, or where a branch is transferred from one place to another. (***In the case of the smallest feature, since it's very close to the ground & may still be developing, that might work if done very carefully, &, would need to watch carefully for any signs of deterioration of adjacent bark etc, as such deterioration would affect nutrient transport & could very quickly jeopardise the tree. In the case of deciding to try remove the other two, maybe coating the Wood with a type of thin brush on or spray tar for grafting etc (maybe blended with something infection preventive)(& not tape), but stimulating the inner edge of the encircling healthy nutrient transport tissue so that it will gradually grow over/across the tarred wood and make a healthy living seal of functioning nutrient transport tissue, and also growing protective exterior bark over the new nutrient transport tissue as the new nutrient transport tissue grows) Which wouldn't generally be typical in a large fruit orchard unless doing so to preserve & develop special varieties etc, as it could be comparatively time intensive per tree. Good overgrowth of new tissue could take a while, but can proceed steadily & in a reasonable amount of time. And if the rootlet arrays aren't bothering anything, your Apple Tree may grow out of them/ grow over them as it grows larger!

Based on your excellent additional illustrations, the features seem to be rootlets/ roots forming, & hopefully your nice Apple Tree can do fine!

Is this Viburnum Leaf Beetle?

Is this lichen or some other fungus on my palm tree?

What type of conifer is this and is it OK near a house?

What is this large plant that came up when I turned my soil?

Is growing bonsai a special case of hydroponics?

What kind of plant is this? Found a flower plant in my grocery parsley

My Wisteria was pale

What type of bonsai tree is this and why is it losing leaves?

Will animal burrowing under tree damage the tree?

How to sex ID my plant?

How can I tell whether compost is too hot to plant into?

What do I do with compost bin contents