Will animal burrowing under tree damage the tree?

There is an animal burrowing under one of my trees. The hole is 2 or 3 inches in diameter, and I’m fairly certain it’s chipmunks. However, my main concern is the overall health of the tree. As you can see, I’ve tried filling the hole with dirt and then rocks, but the animal always finds a way back in. So can the animal damage the tree? If so, what signs should I be looking for? 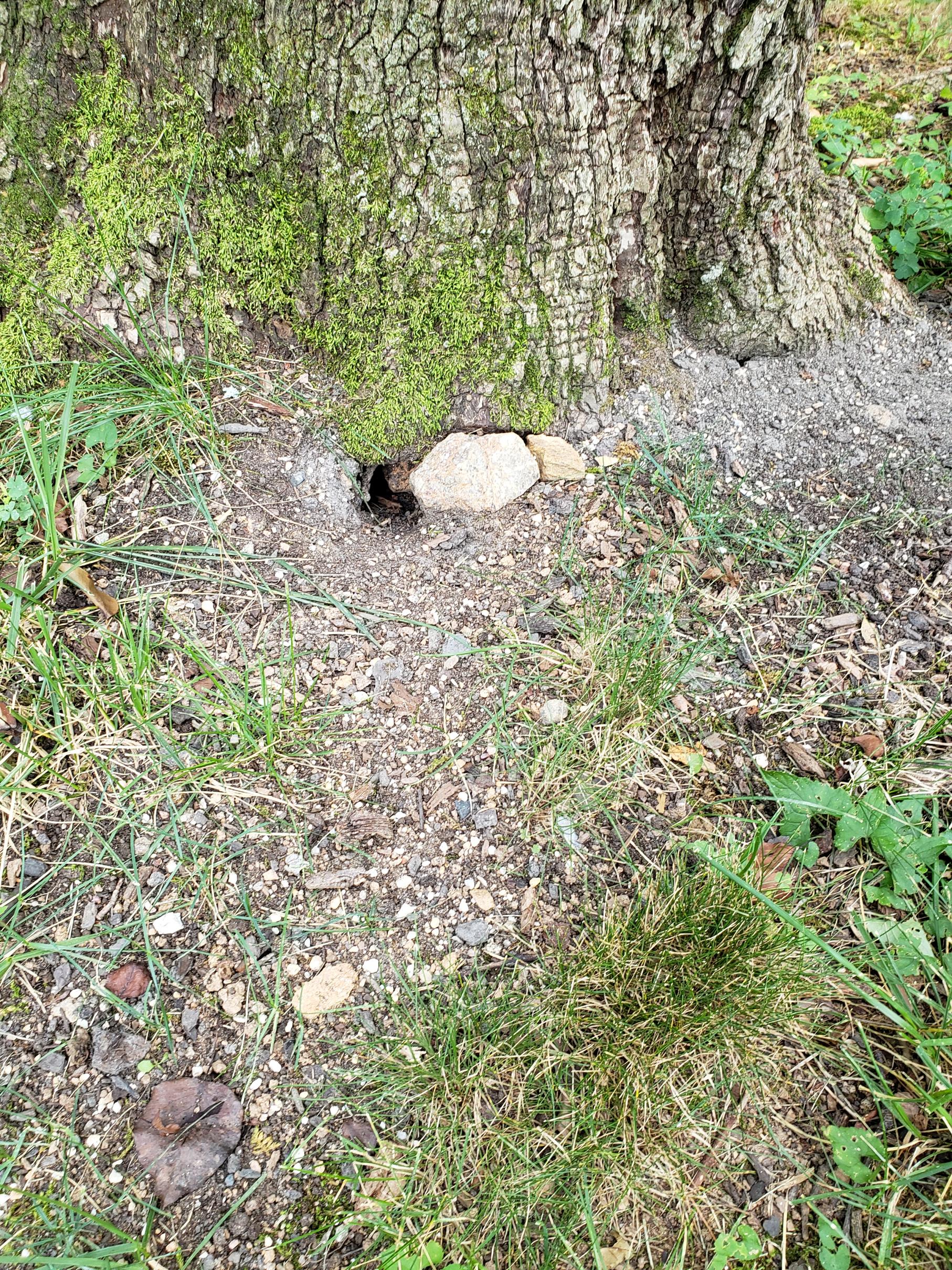 I had a situation with a chipmunk.He/she burrowed a hole right where I needed to walk. Not ideal.! They had their family so I figured it was time to give them notice, cotton balls dipped in ammonia.! He/she, kicked them out so I put them back in. Took at little bit but they moved.They're still around, I leave peanuts out in the garage for them..lol

It could be beneficial to try a bit more to determine what's making the hole, and the hole could be being shared! What type of animal doing the burrowing can make a big difference as to health of the tree, and even whether to fill it in! And if decide to fill it in, try be sure it isn't in the hole when filling it in!

eg: It could be a toad, which would be very benign and excellent! They might dig out after the hole covered in. A Toad may recognise faces, and will reside in a surprisingly small area for many years, leaving & returning in Spring each year, perhaps some distance! And, that would be a good place for hibernation.

After(!) determining that there aren't stinging insects inside, maybe Cautiously place a thin twig over the hole and monitor when it moves. If it's at night, might be a mole, which would probably be ok for a tree that large, and could protect the tree from grubs. Chipmunks tend to be active in very early morning, so likely could spot one, & if it/they multiply, they'll become quite apparent. Chipmunks would also likely eat small pieces of bread if placed adjacent to the hole! Or, could be a snake(s)! which could be Very hazardous(!), and which don't always appear as advertised. And a snake(s) could stay inside the hole for days, then open the hole back up upon emerging! But snakes don't eat bread, so if birds/ other nonresidents of the hole don't eat small bits of bread placed adjacent to the hole, likely the resident isn't a rodent. Might be a rat too: some wild outdoor rats are quite unlike the gray ones etc, but they might chew up the roots; rodents gnaw, or their teeth can become too long, so when remaining inside on long colder days they may use the tree to chew on, certainly poor for the tree.

Chipmunks chew up the interiors of trees but the tree might survive: squirrels may nest in trees for over a century etc. They might also create a new entrance or two, implying an appreciable amount of wood removal. The first indication of that could be noticing a new entrance being used 3 meters up the tree, or there might already be another entrance, and the lower hole an alternative entrance.

If someone likes chipmunks a lot, then might let them remain, or, if clearly observe it to be chipmunks, various small livetraps are available, but beware, they can bite & they're very quick! Then depending on regulations etc, maybe could Carefully release them several km away in some wooded area etc. And: the hole(s) will still be there & need to be closed off, or likely there would be yellowjackets etc taking up residence. Maybe a bit of spray in there before closing the holes would deter them also, because of the scent.

One method of closing the holes may be: Gently abrading the inner rims of the holes and setting a fitted piece of wood into the hole(s). This may induce healthy growth to gradually close the hole(s), and after a year or two may nicely close the hole(s). The hole being on the ground is sort of poor news because of moisture etc inherent with that, which can very negatively affect the tree after a while. And ants can do extensive harm also. Structural wood removal may already be present, but even if already present, discontinuing more damage could save the tree! And being at the ground level may be an invitation for yellowjackets, which can take hold surprisingly quickly, in only a few weeks.

Maybe just try observing carefully to see what it is/isn't, observing from where the resident(s) wouldn't notice, as the resident(s) might then simply refrain from coming out until it seems safe: whatever it is, it seems somewhat acclimated to being near people. Good well written question and clear illustration!

Can I grow an Oak Live Tree in a large container to keep it around 20 ft high?

Not sure what is happening to tomato plant

Why is growth on this Stromanthe streaked with green rather than purple undersides & some leaves have defects?

My Cat Palm is yellowing then browning :(( help!

Can anyone help me identify the problem with my Areca Palm

What is this willow-like tree?

What are these bugs and spots on my Chilli Plant

Apple tree – Is this a disease?

How can I strengthen a part of lawn that is sometimes driven over by cars?

Why is anti-siphon leaking with just one zone?