I’m trying to set up a QGIS project for creating a map of a fictional planet smaller than Earth. See here for a helpful question that doesn’t quite touch on what I’m trying to accomplish (I don’t mind a non-cylindrical projection, and don’t have any shapefiles or rasters that the map has to "fit").

My primary goal is to be able to draw continents as if viewing their orthographic projection, while having the ability to check their ellipsoid measurements. After several hours of searching, I still haven’t found if that capability exists in QGIS, so I’ve contented myself with a lonlat world map. The problem is, I still can’t get the equatorial distance from -180 to 180 degrees to match the circumference I calculated.

Here is the proj4 string for the custom CRS:

I have set Project Properties>General>Measurements to custom ellipsoid with the above mentioned equatorial and polar radii, and set the custom CRS as the project’s CRS.

I have created a vector layer with the custom CRS, a polyline that should show the bounds of the map. It is a rectangle from degree coordinates -180 to +180 x and -90 to +90 y. However, when I measure the equatorial distance across this rectangle (at y=0), I get wildly varying distances. Here is an example: 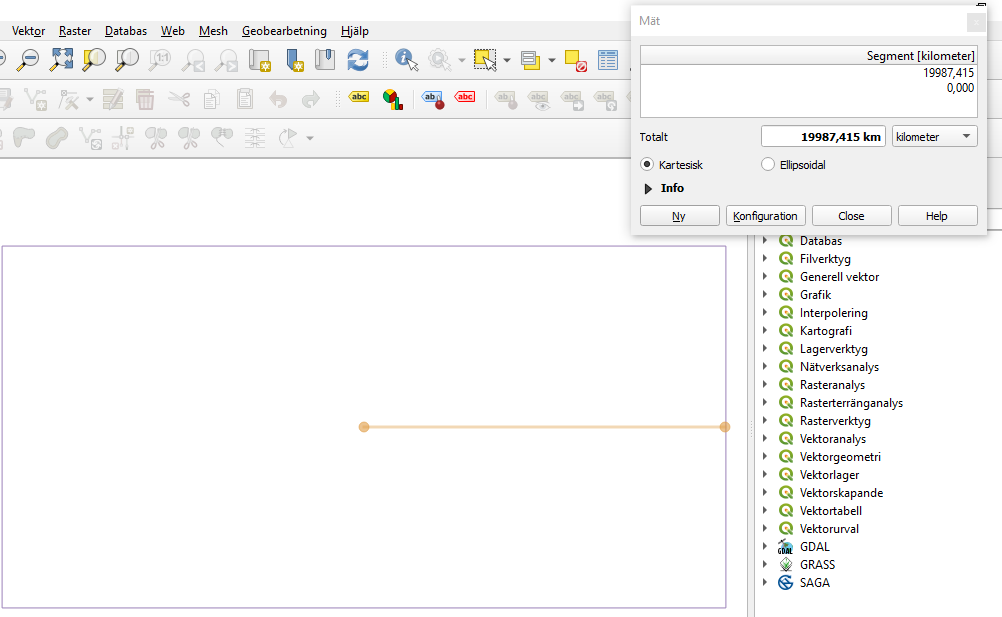 Even when I have defined the coordinate reference system as eqc, I still get an incorrect circumference at the equator.

What do I need to change in order to be able to get realistic measurements? Is there any way to work on all parts of the ellipsoid in one QGIS project (and have them have fairly orthographic dimensions when I zoom in on them), or should I be looking into some other software?

Forget all kind of ellipsoidal calculations for non-Earth CRSes in QGIS.

But you can use the CRSes for the layers, and transform between geographic and projected non-Earth CRSes. If you export the layer to the custom eqc system, you can measure the Cartesian length of the geometries and they will be right.

Progress bar does not show progress during processing

1  Asked on December 9, 2020 by francisco-danubio-salas-rosett

How to apply a layer definition with a spatial query to a Dynamic layer?

Error trying to cast an ee.Image to a numpy array

Using subtype property of the esriaddinx for a AddIn button

Tilemill/CartoCSS: how to center label in a polygon

Can relation reference in QGIS and QField be used to fill stochastic matrices?

NDVI out of range?

Mapbox – referencing a layer added in Studio in GL JS

QGIS Vector Toolbar Has No Tools

In ArcMap 10.6 how can I turn off the ‘snapping’ associated with drawing rather than features?

How to sum pixels of two overlapping rasters with different extents