So I’m trying to replicate this font by using blending modes mostly bevel and emboss I’ve tried two times, using two layers for the stroke and the other for the inside but the results aren’t really looking how I want them any tips on hoe I could get as close as possible to this look? 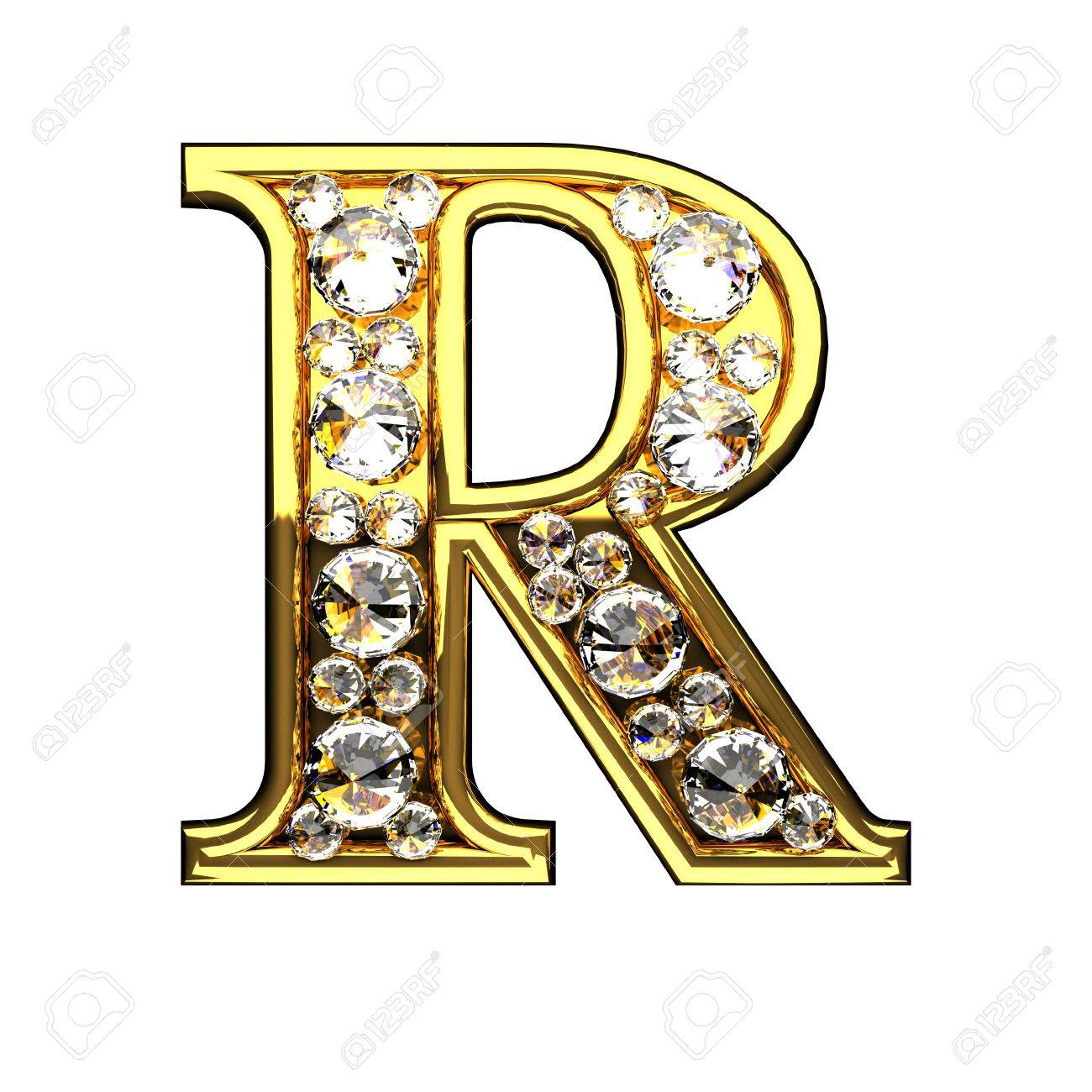 If you look closer the R you see it's a perspective drawing. Bevel&Emboss doesn't make it. But Photoshop's 3D Repousse effect can create the perspective. You must still stack 2 versions.

Metallic gloss is a fake reflection of the environment and the brilliants. You must insert it manually. It can be

See the already suggested older case Ideas how to create oldschool gold logo similar to Labyrinth and some of the numerous gold making receipes (in Photoshop, GIMP, Illustrator etc...)

Illustrator can be used to create the basic shapes. Its 3D effect Extrude&Bevel can create the perspective. The effect (like Photoshop's Repousse) cannot make all in one, the shape is too complex. An example:

Draw 2 copies of a R, one with thin stroke and no fill and the other with double wide stroke and fill. Have different colors to see easily which is which:

In the right is shown why there's wide stroke - the bottom shape must be bigger.

Expand both versions. Convert the type to outline and outline also the strokes. Combine the bigger version to one closed shape by applying Pathfinder Panel's Unite. You should have 2 filled shapes with no strokes: 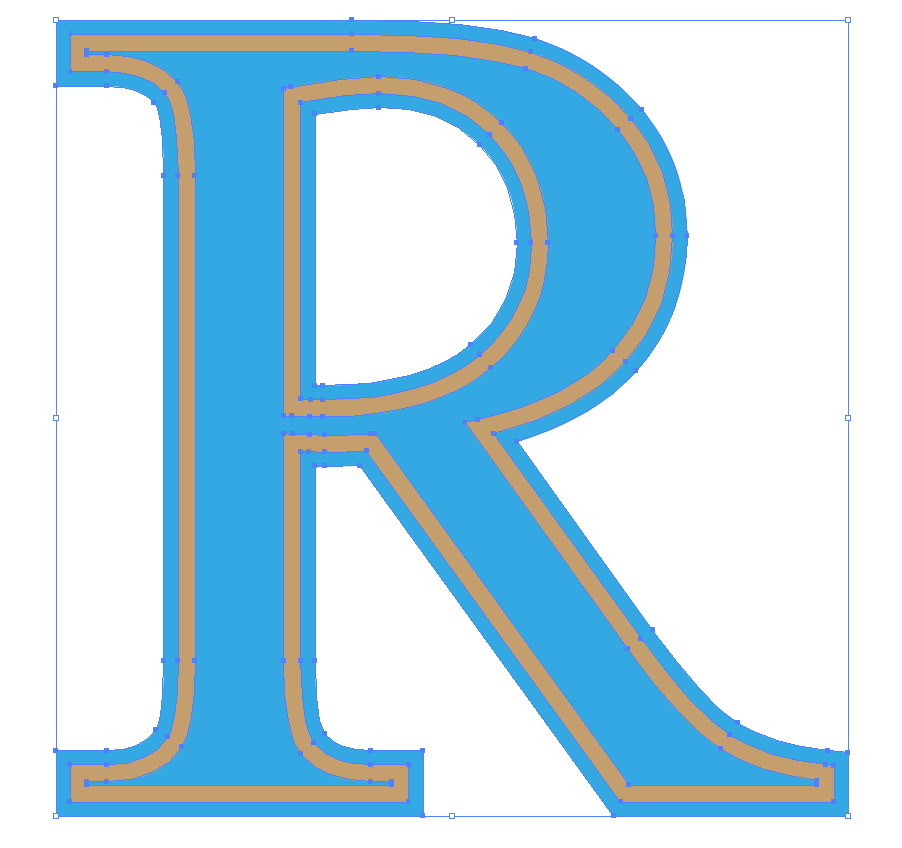 Select the shapes simultaneously and extrude them with Effect > 3D > Bevel&Extrude. You should play with the light to get good contrast to see the differently lit areas. The viewing angle is not exactly straight on the face because my ancient Illustrator doesn't show it right with zero angles. The perspective is set to 120 degrees: 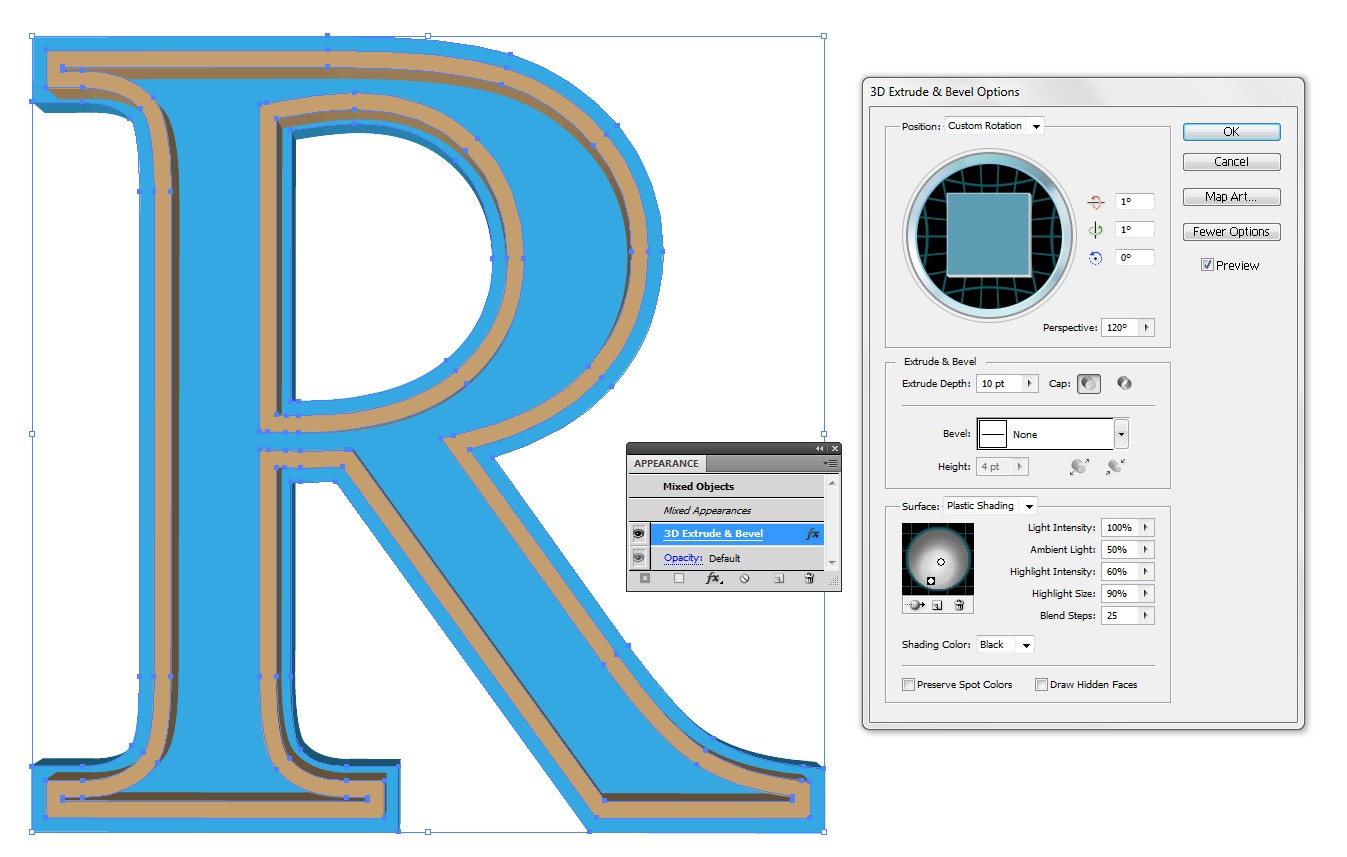 You can also try to color the shapes to the wanted yellow...orange color and try different shadow colors to get it more right directly with the 3D effect. Metallic gloss unfortunately stays off in this phase, Illustator's 3D effect doesn't create it: 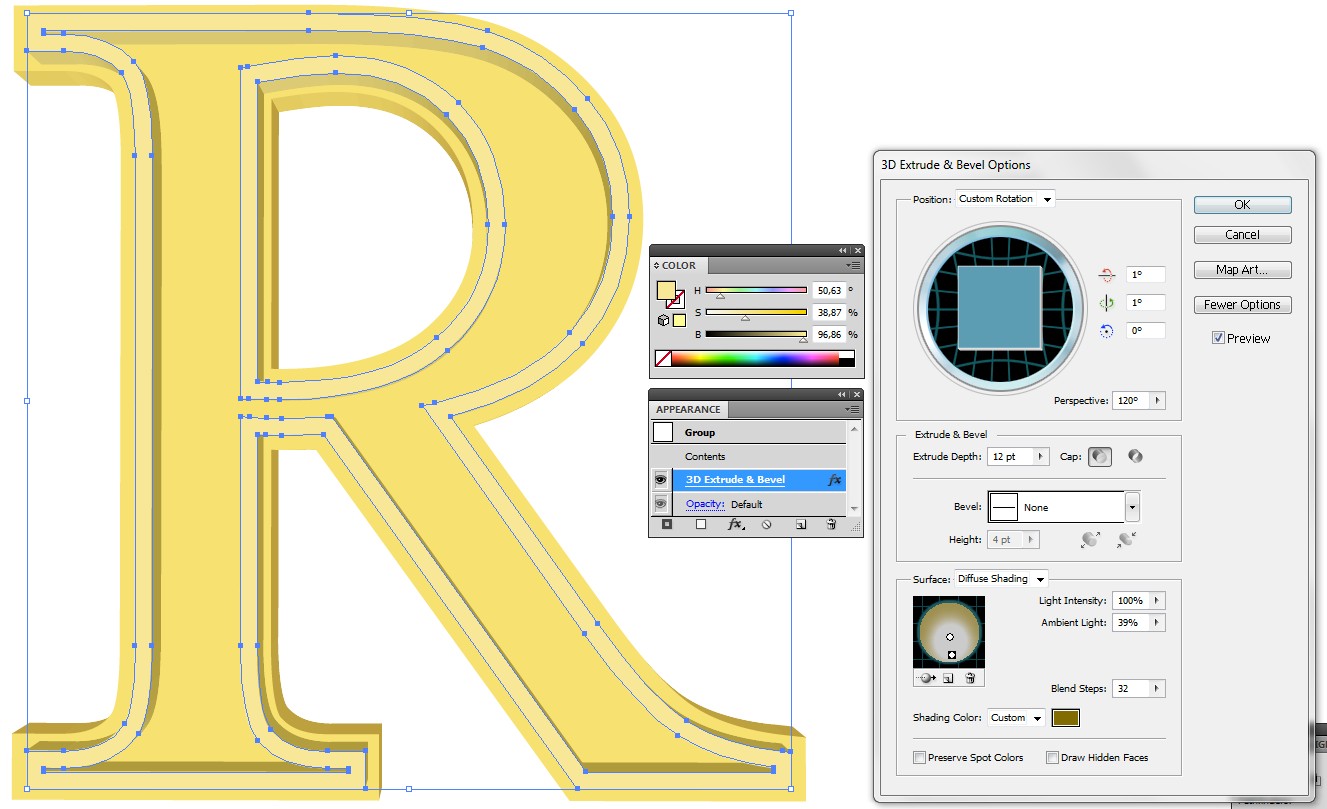 The result with Photoshop's 3D Repousse is quite the same.

The metallic gloss must be inserted manually. You can copy and paste this to a high resolution (say 1000 x 1000 or more )empty image in Photoshop to insert colors. In Illustrator you must expand the appearance to get the 3D effect fixed, release the clipping mask and ungroup numerous times to get the areas free for edits. Finally the shape is splintered to numerous areas. To keep the number low have only few, say 8 blend steps in the 3D extrude&Bevel dialog. See one splinter: 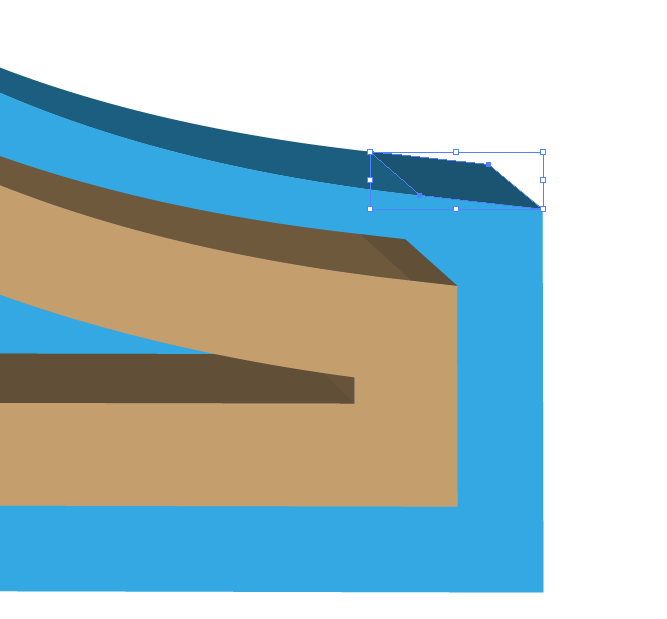 Low number of Blend Steps makes totally implausible gradients, but there's only few shapes which you must combine (=Unite or use the Shape Builder) to get one area which should get an own gradient fill. You can copy and paste differently colored areas separately to different layers in Photoshop for flexible coloring or you can make the coloring in Illustrator.

NOTE: 3D Extrude&Bevel doesn't generate gradients if you expand the appearance, the gradients are splintered to separate single color zones as shown.

ADD: There's at least one comment which suggests one shouldn't waste his time by trying to make it in a 2D program. The suggestion should be taken seriously if one wants somehow plausible results with no more effort (see NOTE2) than making the same 3D extrusion as I did in Illustrator.

I made one version for reference. This is what came out from a free tryout version of Keyshot (no light environment adjustments, only few materials and screenshot output) The 3D letter R was drawn in a CAD program. 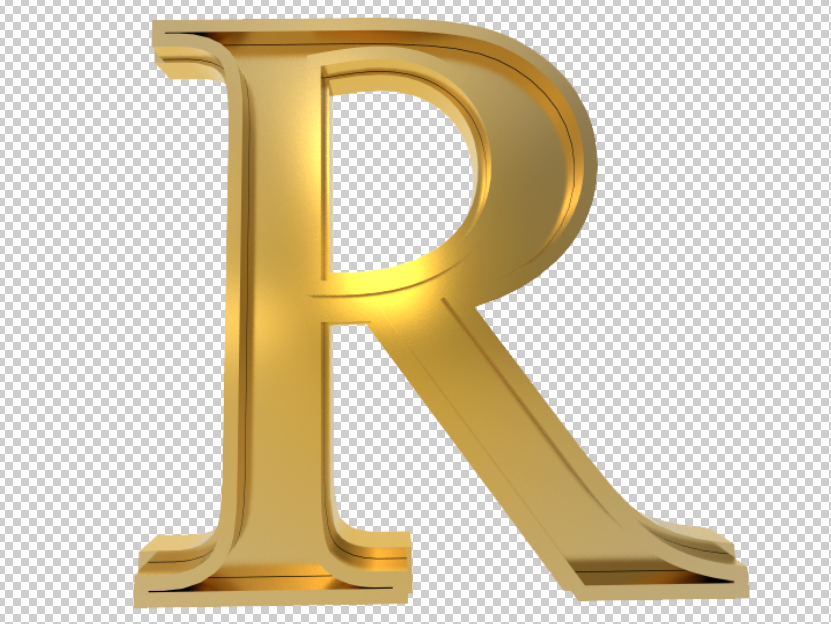 NOTE2: If the effort needed to get started is not taken into the account. Premium priced 3D modelling programs which are intended for artistic work and also their free rival Blender would make better results but the complexity of such stuff can easily kill the interest of an unprepared beginner.

Is there a difference between tinting K100 black and using a lower K value?

How can I better convey the idea of “message sent”?

Where to use which kind of font?

How to make a pixel perfect adjustable outlined circle in Photoshop and also Illustrator, like, the one that Microsoft Paint has, as example?

Advice on freelancing in the same field as your day job

How would I remove all the white from this image? I just want the image to be the red parts

Photoshop: How to make batch automation save multiple images?

What to look for in projectors to use in murals

How to position text blocks relative to other elements?

How can I compare specific copy across all installed fonts?

How to save multiple files 300ppi in photoshop?

How to subtract a shape from another one grabbing gradient continuity?

What’s the easiest way to superimpose glyphs in InDesign?