What is known about the Ubaid lizard-people figurines?

I find the Ubaid lizard-people figurines visually captivating. But for obvious reasons it’s difficult to search for information about them online without wading chest deep through pages of ancient aliens garbage, for little reward. So far I’ve managed to find pictures of several different figurines, that they were excavated at Ur, and that they date from the Ubaid period, and that they may present evidence for several varieties of body modification – though I don’t know how solid that last one is.

What else do we actually know about these odd and arresting figures? Are there theories as to their origins, and significance within Mesopotamian art or religious belief? Are the majority female, as seems to be from the pictures, and what are they wearing and holding? 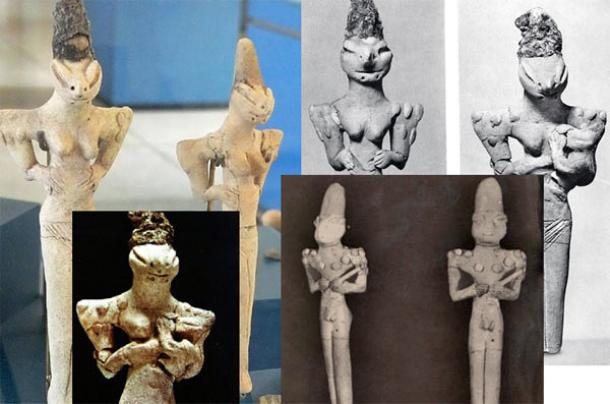 There are many theories & interpretations, but relatively little evidence to support most of them. Of course, there are no written sources from the Ubaid period to support them.

You are absolutely right that there hasn't been a great deal of published material on the subject. However, a good, and relatively recent (2006), paper on the subject is A Snake in the Grass. Reassessing the ever-intriguing ophidian figurines by Aurelie Daems in Beyond the Ubaid: Transformation and Integration in the Late Prehistoric Societies of the Middle East, Edited by Robert A Carter & Graham Philip, pp 149-161, (published by the Oriental Institute at the University of Chicago, and currently available as a pdf file on their website).

That volume also has other papers that you might find of interest, including one on Ubaid head-shaping, which is particularly relevant to these figurines.

The one you have at bottom left (and top right) is interpreted as holding / nursing a baby. A similar figure, in this case missing the head, can be seen in this example from the British Museum:

Figures generally appear to be naked. The marks on the bodies may indicate tattoos or ritual scarification, or a combination of the two (or something else entirely).

We have figures representing both males and females, but sexual dimorphism is less evident in figures of the Ubaid period (in stark contrast to figures from earlier periods). You have male figure in the bottom-right of your picture.

The Ubaid figurines tend to show male and female figures with similar proportions, and rather than emphasising the differences between the sexes they tend to emphasise the forms of body ornamentation (assuming the marks do actually represent tattoos or ritual scarification), and cranial deformation common to both.

We seem to be on much more secure ground when it comes to explaining the shape of the heads of the figurines.

These almost certainly represent skulls that were bound in infancy to deliberately modify the shape (a practice known from many other cultures, and which is still practised in Vanuatu, for example). We have good osteological evidence for the practice from excavated human remains from the period.

The practice of intentional cranial deformation by binding the skull in infancy is strongly supported by skeletal evidence from a number of fifth-millennium sites in the region. These sites include

In addition, we may have evidence from Eridu (Lorentz 2010, p128), although this is a little less certain due to the fragmentary nature of the remains.

These examples, illustrating cranial deformation, were excavated at Şeyh Höyük, and are now in the collection of the Ankara Museum: 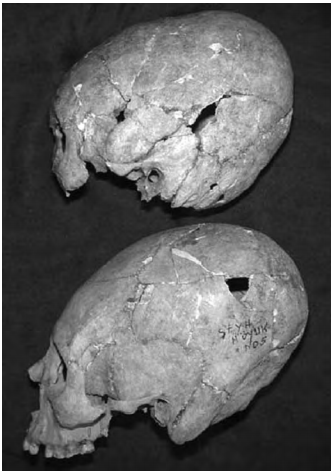 Özbek's 2003 study of the skeletal remains from 31 individuals at Değirmentepe, which provided solid evidence for artificial cranial deformation, probably achieved by binding the skull in infancy.

Özbal's study, also in 2003, revealed 13 skeletons showing evidence for deliberate cranial deformation. In this case, the practice was observed across all age-ranges from the sample. The evidence strongly suggested that the required deformation was achieved by binding the head with bandages. This caused flattening or compression of the frontal bone of the skull. (Özbal 2003).

(I'd also highly recommend the paper by Molleson & Campbell, although I should declare an interest since Theya Molleson was my tutor when I studied human osteology as part of my Archaeology master degree)

In addition, you might find the 2011 PhD thesis, The Social Life of Human Remains: Burial rites and the accumulation of capital during the transition from Neolithic to urban societies in the Near East by Gareth David Brereton of UCL, of interest. He mentions these and other figurines of the period, together with the evidence from burials as discussed above.

Although written back in 1968, Peter Ucko's book Anthropomorphic figurines of predynastic Egypt and neolithic Crete with comparative material from the prehistoric Near East and mainland Greece. (Royal Anthropological Institute Occasional Paper No. 24) remains one of the standard texts for this subject, although the Ubaid figurines form only a small part of the study. I'm not aware of any copies available online though.

The following sources are much more up-to-date.

Correct answer by sempaiscuba on December 19, 2020

Why did so many Saxons emigrate to England?

What is this possible old coin found in Western Ukraine?

Which were the continent-wide common languages in human history?

Why does Sugar Island belong to USA?

When and how did the West lose its dependency on the USSR for Titanium?

Why wasn’t the Republic of Ireland invaded (by either side) in WW2?

In ancient Rome, did a lot of people feel guilty about owning slaves?

What’s the significance of “cat, hare, and ale” in this quotation?

Was the Kerensky Offensive doomed from the start?

Did Averroes really try to bury light in an attempt to create gold, or was that invented by Victor Hugo?

Did the Czech Legion bring POWs to Czechoslovakia? And if so, why?

Was Zhukov’s wit portrayed accurately in The Death of Stalin?

What is the connection between the rise of modern football in the UK and the shortening of the work week?

Has a CIWS system ever shot down a missile in combat?

When is Samonios in comparison to the Gregorian calendar?

What is known about the Ubaid lizard-people figurines?