I purchased a used Generac 10kva with a transfer switch and am in the final stages of getting things setup. The generator itself has a 45a breaker on it and I’ve got 6 ga wire running from it to the transfer switch along with the 4 control wires. The gentleman that I purchased from said on his main panel he had a 100a breaker running to the transfer switch and then the sub panel shown was off the switch. Given that he has the 100a breaker, I’m in belief that I should be running 2 ga wire from the main panel to the switch for utility and then 2 ga again from the switch to the subpanel. What just seems super odd to me, is that the breakers on the subpanels always look to well exceed the output of the generators.

Pics of my setup 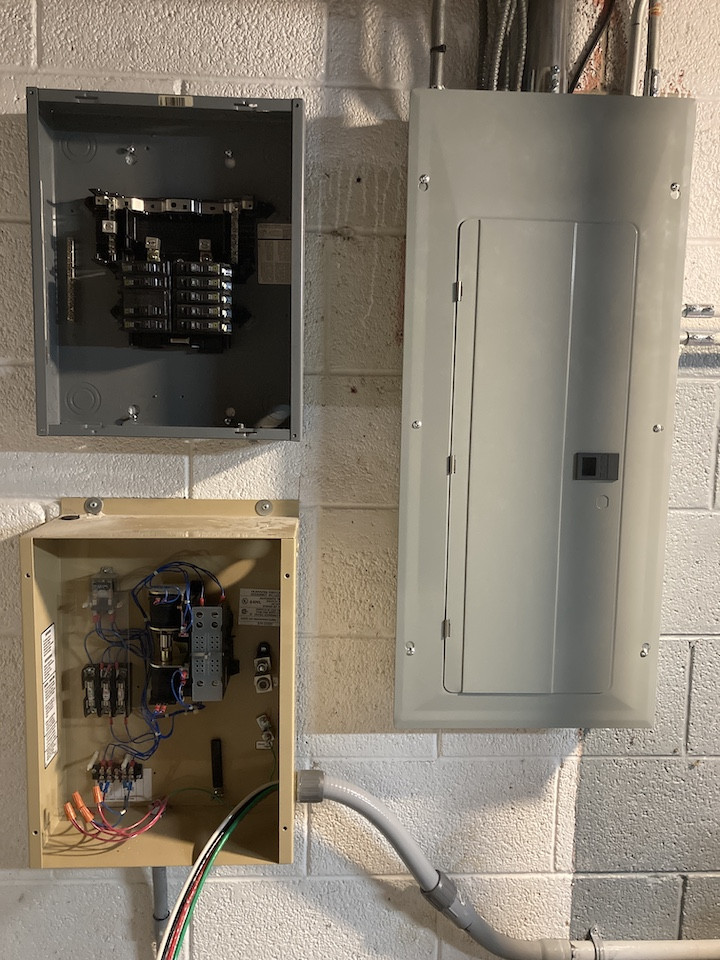 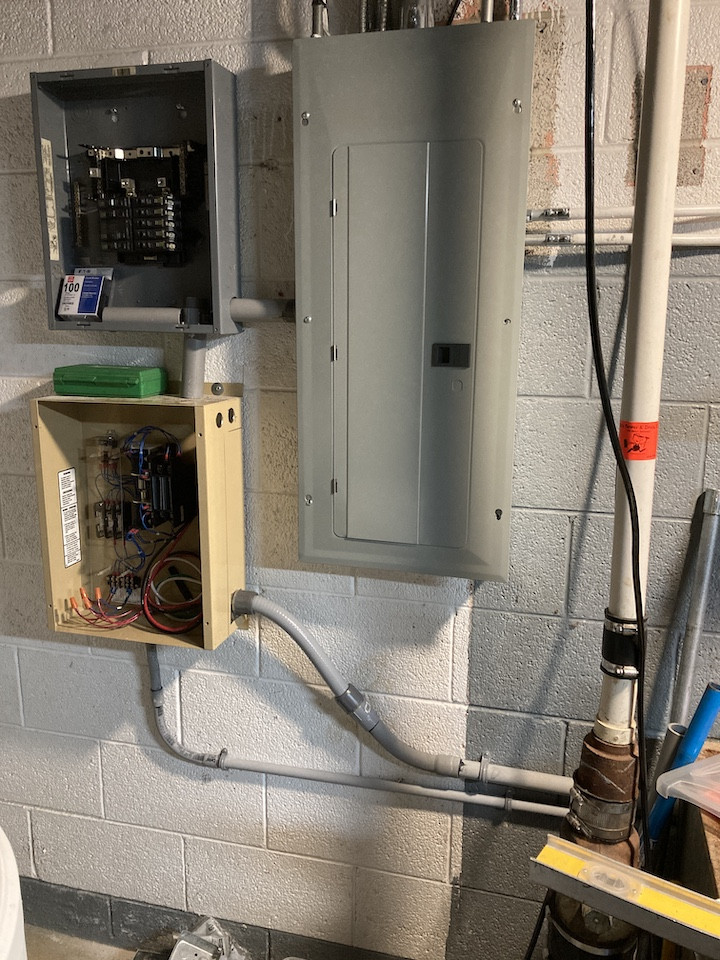 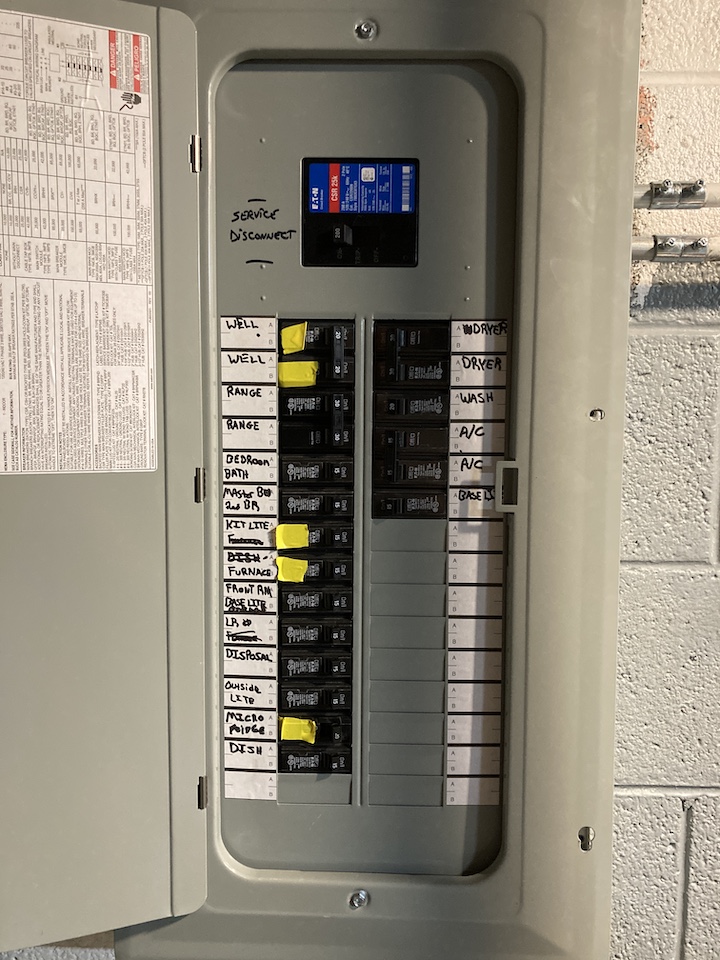 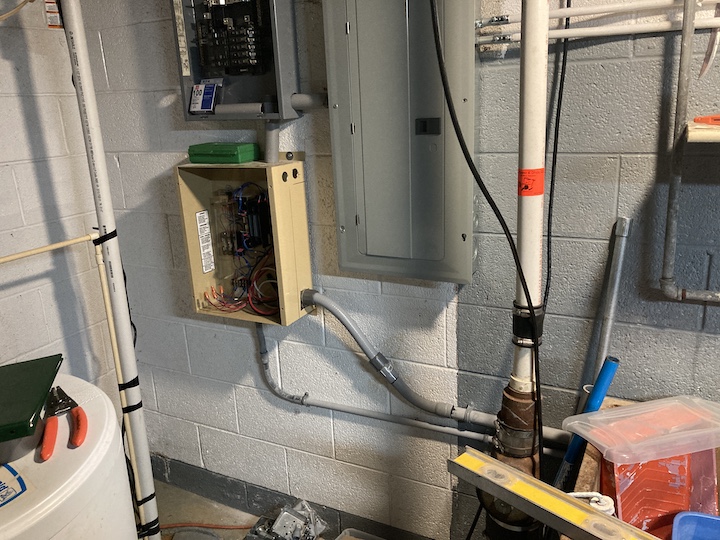 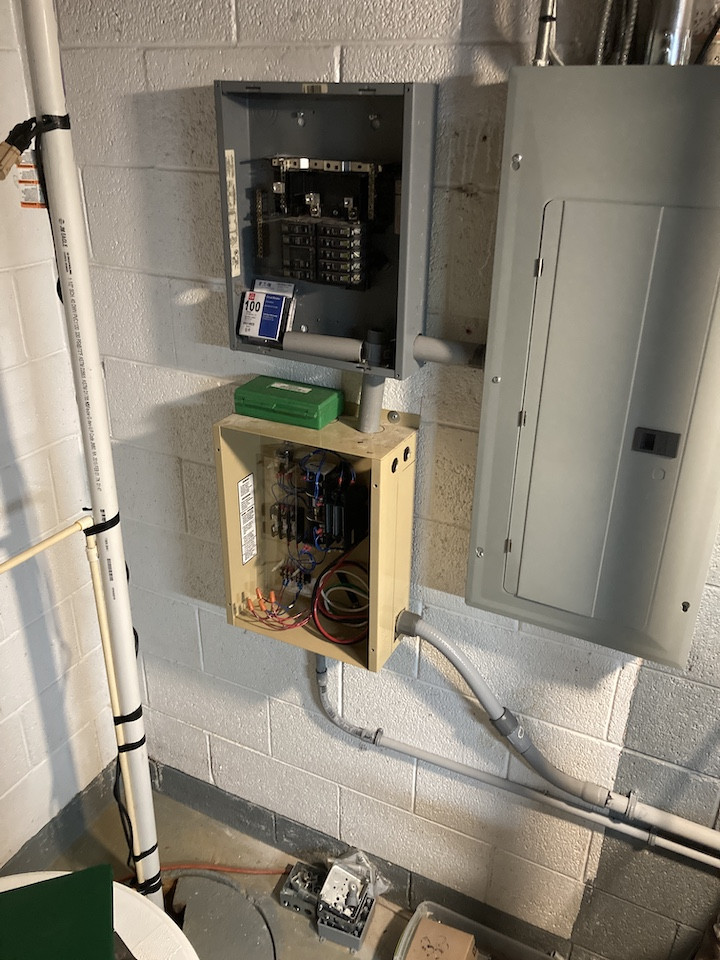 Pic of a newer 7.5kva unit with transfer 50a switch subpanel, those 8 breakers are well over 50a. 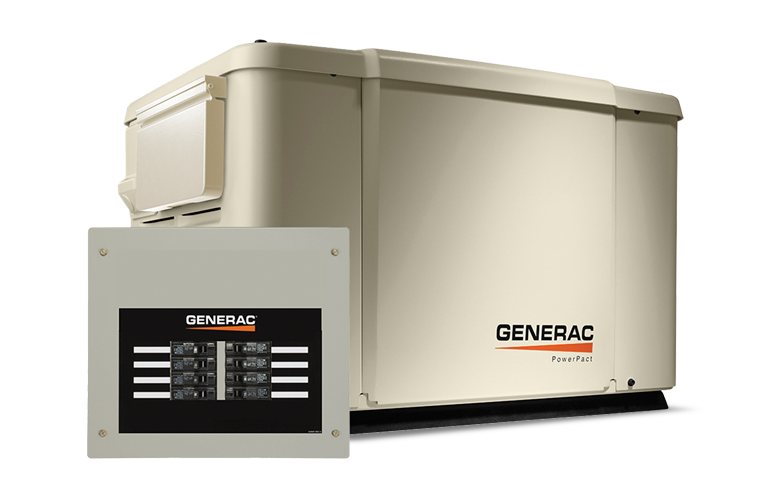 Get a bigger subpanel

You appear to have an automatic transfer switch, and the switching happens there. The 10? 12? space subpanel is just an ordinary run of the mill subpanel. It isn't special, it isn't matched to the transfer switch, or anything like that.

However, it is the long experience of the experts on this forum that you will find the "only 12 spaces" very stifling later down the road, and you will regret not upsizing that subpanel now while you have the chance. A 30-space is not excessive. Really.

Note that if you buy the same type of subpanel as your main panel, you can simply move the breakers over. This will save a ton of money if any of them are AFCI or GFCI breakers! You could not move them into the pictured subpanel without replacing its plain breaker with a GFCI breaker for that panel type.

I realize there is a mentality among generator owners that only a precious few circuits can be on generator; that's not true at all. It is sourced, however, from something barely related which is true, but we'll come back round to that.

What's got you knocked for a loop is how the breakers can add up to more than the main. But that's OK because most circuits are rarely loaded. So, with a house, you do a "load calculation" to estimate a likely loading for a house. You only need the service to cover that.

For instance, "3 watts per square foot" is a general rule, plus 1500 W per kitchen and laundry-room circuit. This seems very arbitrary, but it's backed up by an enormous amount of data collected over decades by the NFPA.

However, there's an exception when a load is specifically known: E.G. Mary uses a spare bedroom to run Bitcoin miners, PC servers that do complex math all day, and draw 12A @ 120V doing it x 8 miners. Mary can't just fold that into the normal load calc for the house because it runs at the same time as those. The rules say that for continuous loads, you must derate 125% - so 12A becomes 15A. So those 8 servers, 4 per "leg" of 240V, mean 60A @ 240V must be provisioned just for those. That adds onto the normal load calculation for the house - so if that was 39A, Mary skates by with 99A needed to be provisioned.

So you can use general rules, or if you have specific info you can use that instead. For instance a modern refrigerator takes about 0.9 amps (108W) when running, and 0.3 amps (36W) on average, so a dedicated fridge circuit needs only a small allocation.

...Because an ATS-controlled generator must be big enough

These calculations matter because they are the basis for complying with a rule: Code requires that a generator controlled by an automatic transfer switch be large enough to pick up the entire provisioned load (i.e. the load that is on the generator-side subpanel).

And there's a neat exception for loads which are on an automatic "load shed" device - which will connect the load to the generator only when it has enough power to drive it. (or to be more precise, disconnect it if the generator is lugging). Those don't count toward the "entire load".

So the upshot is, you can support a lot more circuits than you think you can - including ALL your house's lighting and general-use receps. This could be 2 dozen circuits! Stuff like this is why it's important to have a LOT of spaces.

Do not use "his" circuit breaker unless it's a dead-nuts match for your type of panel. For instance if the breaker is Eaton BR type, and your panel is a Bryant BR type, that is fine since they are the same type (Bryant became Cutler Hammer which is owned by Eaton)... but you can't use it in a GE or Square D panel.

This isn't brand-name "rah rah". The shape of the power buses is actually different, and the clips from one breaker won't engage properly to another panel's bus stabs. You'll get corner (single point) contact instead of flat-surface contact, and that will overheat and burn up the bus stab. At worst it'll start a panel fire. We see it all the time.

If I went with a large subpanel, I would position them like this. Place the ATS first so the knockouts line up, only an inch or two below is fine, just so the lids will fit on. Place the subpanel second so it lines up with an ATS knockout, then have it vertically align with the main panel. I'd put several short EMT nipples between the panels, they're a real lifesaver when you need 'em. Metal conduit nipples among the panels mean grounding is taken care of; one less wire to have to mess with. 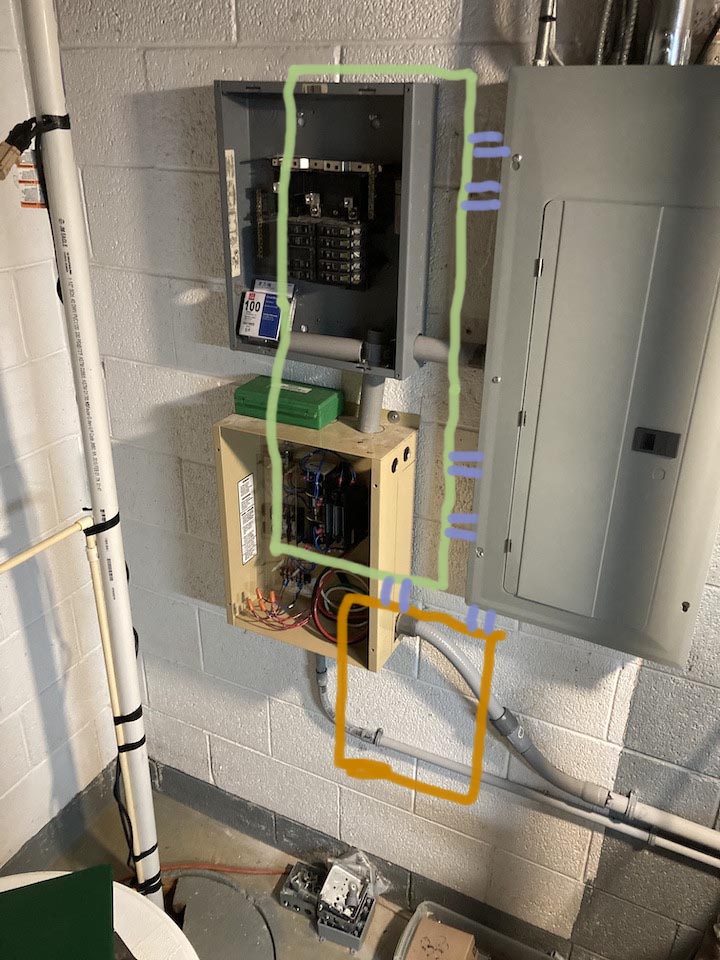 With a manual interlock (my preferred approach to generator interfacing) I have a 35A generator connected to a 200A panel. The 200A panel (40 spaces) might have 400A or more of breakers in it - breakers are not loads. What's connected to the other end of the wires are loads. I get to manage which breakers I have switched on while running from the generator so as not to overload it, but I don't have to "preselect" some small subset of circuits to get generator power, nor be tempted to make an unsafe connection to a circuit I didn't preselect that I decide I want power to.

There is a diversity assumption for most electrical panels, even in your utility served panel you will find the individual branch circuit breakers often add up to more than twice the rating of the main service disconnect.

45A is a pretty substantial generator, I would absolutely mount a larger load panel. I acknowledge it would make it more likely to encounter an overload. Just a well and water heater can take most of the capacity, but moving a few more 15 and 20A receptacle circuit breakers will certainly make your life more comfortable during an outage.

Answered by NoSparksPlease on December 21, 2020

How can I repair a large hole in an interior door?

How to fix gaps in shelf without a table saw?

There is mold in my bucket of paint. Can I still use the paint?

Why does all of my house water stop working when the washer is in use?

How long should I wait to drill holes into brand new mortar?

What was the standard size of drywall panels made around 1960?

Extending Framing Studs From 8′ to 9′

Do I need plumber putty or would the already existing rubber gasket seal this sink leak if installed properly?

Should I grade my property or put dirt against chain link fence?

How to prevent bolts from rusting and sticking in the toilet tank?