I ended up studying this poem last year: 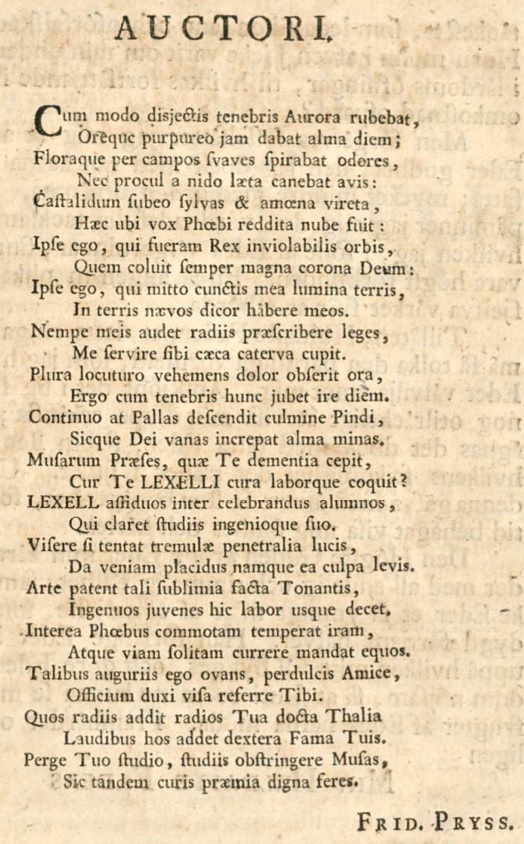 This is a congratulatory poem in a dissertation at the Academy of Turku from 1759.
It is on page 4 of the full dissertation.
I also published an English translation of the poem in hexameter, together with an analysis (with J. Stén).

My question concerns orthographic details.
There are two versions of the letter S, a normal one (“short S”) used in word-final positions and a “long S” used in other positions.
I do not know if the names “short” and “long” are standard, but I hope the intention is clear enough.
(It turns out “long S” is the standard name, and the normal short one is “round” or “terminal”; see comments.)
This rule seems pretty obvious, and it parallels the Greek use of two sigmas.

However, there are two points that I want clarification for:

Why is the S in disjectis short?
I assume it is because it is the final letter of the prefix dis-, and therefore considered word-final.
Reading through pages 2 and 3 reveals that SJ in Swedish is always spelled with long S.
Perhaps the ligature SJ is avoided in Latin to emphasize that it is pronounced so differently in Swedish.
This would also fit the observation that the ligature SI with long S is not avoided in the poem.

Assuming that prefixes should end in a short S, the first S in assiduos should be short.
Why is it long?
Is it because of “attraction” by the adjacent S which starts siduos is therefore long?
Or is as- not realized to be a prefix?

Side question:
Is this consistent with typographical conventions of the era?
Are these two points exceptional, or is this something to be expected in general?

I realize that the question may be more about typographical conventions than Latin in itself, but I hope this is still a good place to ask.

I think your question has both Latin and typographical elements to it.

You are correct in that Greek the letter sigma has two variants: ς, used only at the ends of words, and σ, used elsewhere which was then reflected in Latin cursive.

In Old Latin cursive "the letter s was written as a vertical downstroke with a small curve at the end of it, and a diagonal upstroke at the top. It looked almost like a check mark, with an added diagonal line on top of it. In new Roman cursive, which developed between the third and seventh century AD, s was written almost as we write the lowercase r today: a vertical downstroke, followed by an upstroke with a curve. This was the type of s that found its place in the Carolingian script, which was developed in the court of Charlemagne in order to provide a uniform and legible form of writing. It’s in this script that the r-like form evolved into the long s." [Source: https://www.grammarly.com/blog/history-of-long-s/]

during the Renaissance in Italy humanists wanting to revive what they thought was the original Latin script revived Charlemagne's Carolingian minuscule script and created Humanist minuscule which they called litterae antiquae (the "ancient letters").

For example in Britain and Ireland the following rules applied during the 17th and 18th centuries.:

• short s is used after the letter 'f' (e.g. offset), although not if the word is hyphenated (e.g. off-ſet) [see Short S before and after F for details]

• Compound words with the first element ending in double s and the second element beginning with s are normally and correctly written with a dividing hyphen (e.g. Croſs-ſtitch, Croſs-ſtaff), but very occasionally may be written as a single word, in which case the middle letter 's' is written short (e.g. Croſsſtitch, croſsſtaff).

• long s is used initially and medially except for the exceptions noted above (e.g. ſong, uſe, preſs, ſubſtitute)

• long s is used before a hyphen at a line break (e.g. neceſ-ſary, pleaſ-ed), even when it would normally be a short s (e.g. Shaftſ-bury and huſ-band in a book where Shaftsbury and husband are normal), although exceptions do occur (e.g. Mans-field)

• short s is used before a hyphen in compound words with the first element ending in the letter 's' (e.g. croſs-piece, croſs-examination, Preſs-work, bird's-neſt)

• long s is maintained in abbreviations such as ſ. for ſubſtantive, and Geneſ. for Geneſis (this rule means that it is practically impossible to implement fully correct automatic contextual substitution of long s at the font level)

To get a more detailed description on the various rules in different countries please read the following absolutely fascinating article linked below from which the above rules are copied:

To answer your question specifically would depend on the rules by which the printers in that country were following (far more specific examples on the link above which you could look through) but at a glance the following rules may apply:

In Italy short s is used before an accented vowel (e.g. paſsò, ricusò, sù, sì, così), but not an unaccented letter (e.g. paſſo, ſi). Since j and i are used interchangeably in Latin the j in the above case is equivalent to a vowel.

How to translate this part of Te lucis?

Why did Medieval Latin use “ad” with the accusative instead of just using the dative?