Intuition or geometry for Partial Fractions

I’ve found an example of an answer here. I could start teaching by showing the a simple graph, like $$frac{2x}{x^2-1}$$ and get $$frac{1}{x-1} + frac{1}{x+1},$$ I could see how students could believe that each of those denominators contribute to a vertical asymptote but it doesn’t seem easy to generalize to the overall concept of partial fractions.

I'm wondering how to introduce the idea in a way that is intuitive or geometric.

How about an introduction along the lines of adding two shapes together. Start with adding fractions to have a picture in mind: 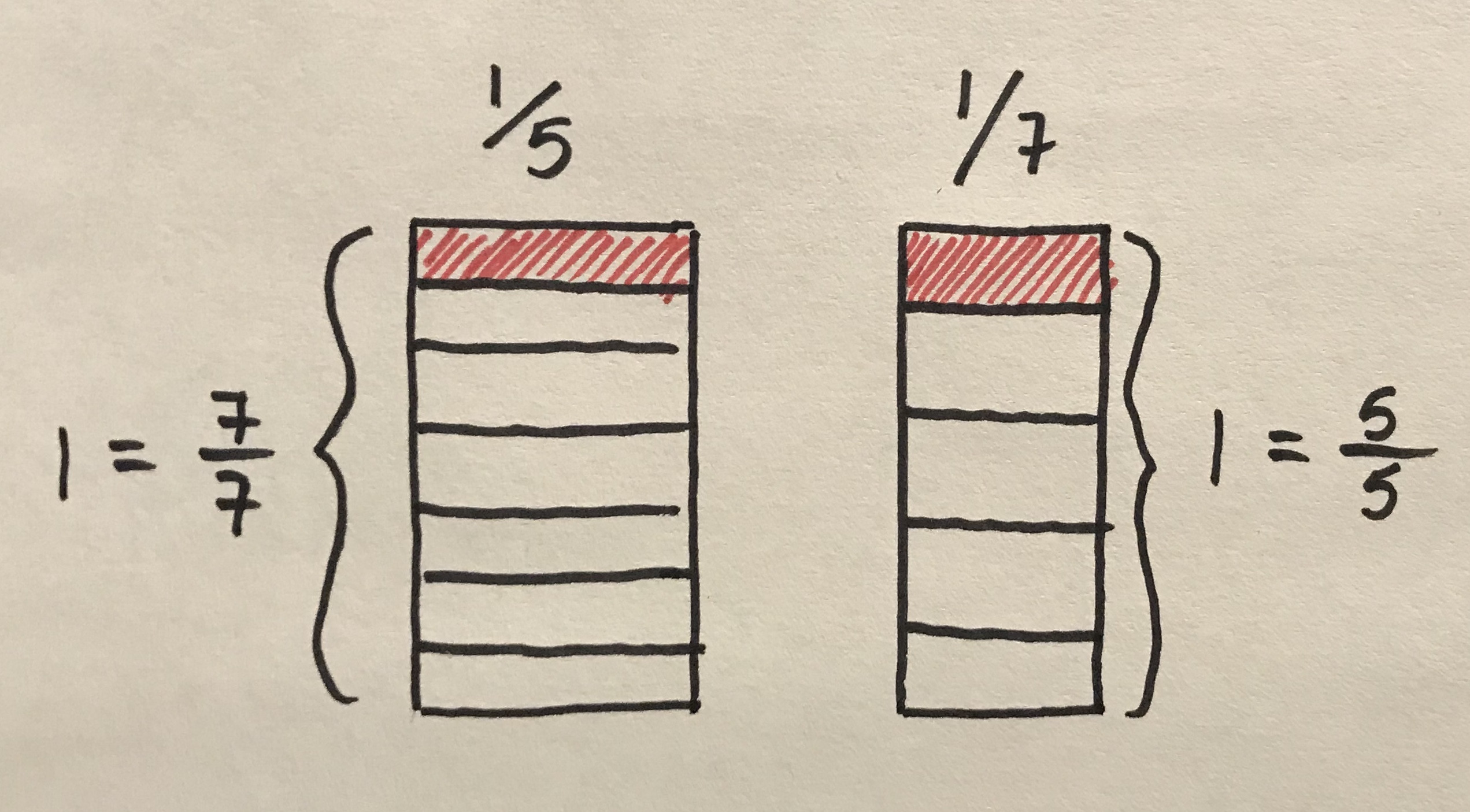 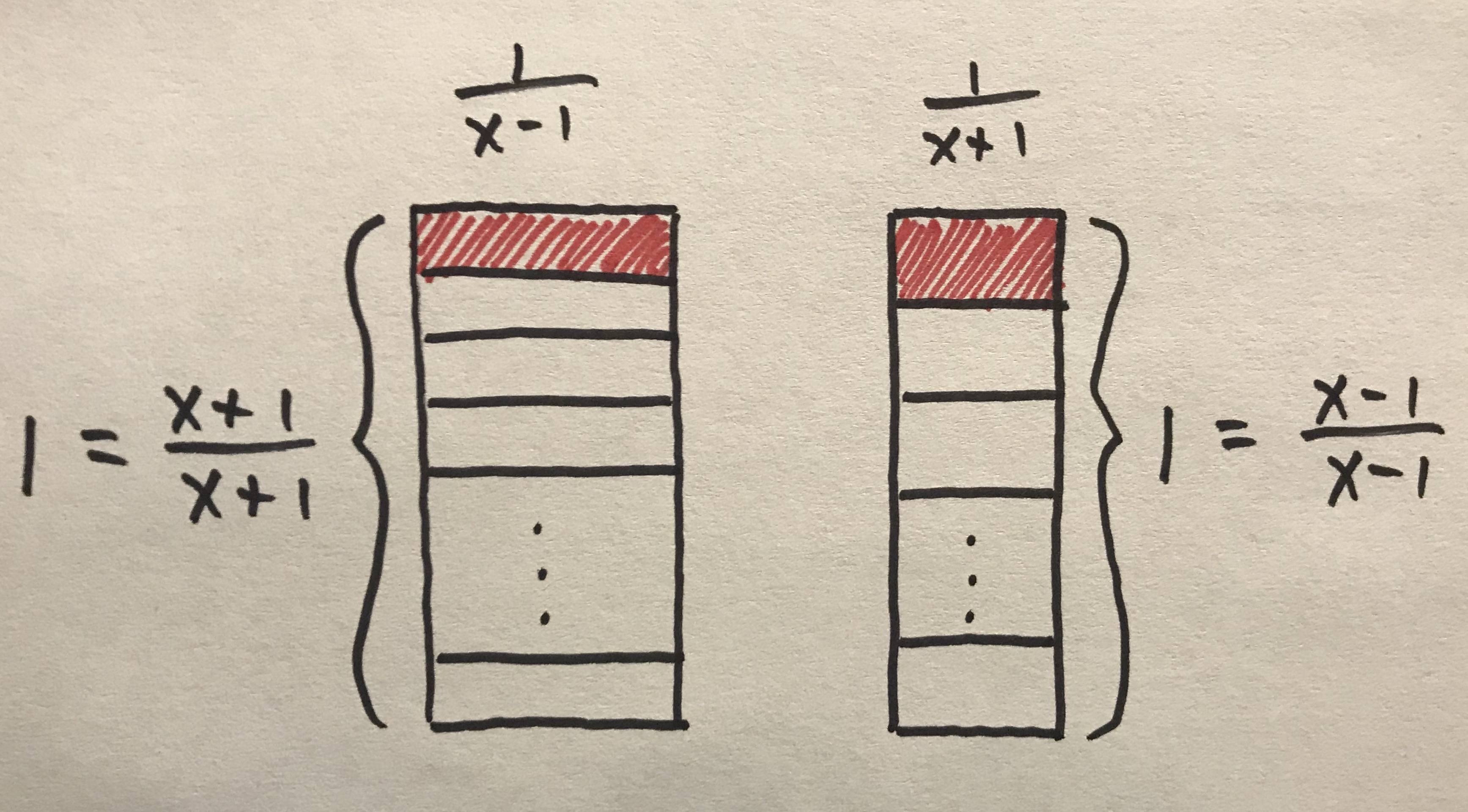 Of course, what you really want to do is motivate the reverse process -- partial fraction decomposition. While I don't know how to let the picture solve this problem, it does show the objects we're counting when trying to find $A$ and $B$ in $frac{A}{x-a} + frac{B}{x-b}$.

I agree it would be cool to have a picture method to actually find the new coefficients, but I suspect we can't have that. The integration-by-parts picture does a nice job of motivating that the formula should seem reasonable/intuitive, but of course it doesn't actually perform the calculus.

I wasn't taught the partial fractions decomposition (PFD) in calculus. We didn't cover it in high school, and when I went to college, they assumed we all knew it. Somehow it was when I read the proof in van der Waerden's Modern Algebra that I understood why it was called partial fractions. I looked at it again a couple days ago, and interestingly, his presentation is not exactly the idea I came away with. But that's the way of learning: sometimes you learn it in your own way. Suppose the degree of a polynomial $g$ is less than the degree of a product of two polynomials $pq$. We can consider a decomposition into fractions $$ f(x) = {g(x) over p(x),q(x)} = {A(x) over p(x)} + {B(x) over q(x)} $$ as partial if $A/p$ or $B/q$ can be further resolved into fractions (for instance if $p$ or $q$ is not a power of an irreducible polynomial). The standard PFD can be found inductively: Take one of the factors $p$ to be the power of an irreducible appearing in the denominator; find $A/p$ and subtract from $f$, leaving $B/q$; and repeat until no factors are left. It has a procedural form similar to partial integration (now called "integration by parts" to avoid confusing the two).

We'll summarize the takeaways to understanding PFD in the perspectives below. They don't all meet the OP's goal of a picture, but they provide some insight into how things work. First of all, the PFD can be viewed as a weighted sum (with the weights $A$ and $B$ in the formula above). This can be connected to a weighted average, center of mass, barycentric coordinates, and interpolation.

Let's consider visualizing the PFD. Say we have a curve going off to infinity at an asymptote, and how it goes to infinity is very important to the form of the PFD. But, by eye, one cannot really see the differences precisely enough as the the curve goes to infinity, except whether the power in the denominator is even or odd. So I think there is some limit to how well we can see what is going on. I think we'll have to use our imagination.

The algebraic structure of the partial fractions problem is not simple, except in the case of two simple poles. It is complicated by the way that multiplication of polynomials is a sort of convolution and not a simple operation like addition and multiplication by a constant. Just how to picture it is not easy. One could model linear and quadratic factors as lengths and areas, but it quickly gets out of hand. Indeed, driven by Pappus' problem, Descartes went the other direction and introduced algebra into geometry to derive necessary relations that could not (easily) be pictured.

1.1 One approach, which leads to a picture, is an extension of the Methodus Incrementorum (1715), of Brook Taylor, who used interpolation to derive Taylor's Theorem. Once, finite differences were a quite common analytical tool. Euler based calculus on them. One application is still quite common, if not universal: The use of the secant line to develop the notion of the tangent line and the derivative. Some teachers may give a similar development of the second derivative in terms of evaluating the function at $x$, $x+h$, $x+2h$, which corresponds to a quadratic interpolant. Taylor's approach extends the notion of an interpolant approximating the tangent line to higher orders to develop the notion of Taylor series.

Thus we can think of $[A:B]$ as (non-normalized) barycentric coordinates of the point $c$ on the projective line, relative to the points $a$ and $b$.

2.2 With Lagrange interpolation, we can connect 1 and 2 in the case that $f(x)=g(x)/h(x)$ with $h(x)$ having distinct (possibly complex) roots. One can, if desired, restrict the class of problems further and just deal with distinct real roots.

3. Via number theory and algebra

3.2 To extend the number theory analogy, I would have said that the right intuition for partial fractions is the Chinese Remainder Theorem, not complex analysis. It is essentially an algebra problem, not a geometry/analysis problem.

As I said in the introduction, this is the way I looked at partial fractions intuitively as a young mathematician, even before I formally learned or connected it with "graded algebras": how degrees of polynomials work is just obvious.

Book request: teaching proving and reasoning at an American university

What is a good physical example of Stokes’ Theorem?

What websites allow students to purchase solutions to problems?