Interesting and unexpected applications of $pi$

$text{What are some interesting cases of $pi$ appearing in situations that do not seem geometric?}$

and the generalization of $zeta (2k)$, my perception of $pi$ has changed. I used to think of it as rather obscure and purely geometric (applying to circles and such), but it seems that is not the case since it pops up in things like this which have no known geometric connection as far as I know. What are some other cases of $pi$ popping up in unexpected places, and is there an underlying geometric explanation for its appearance?

In other words, what are some examples of $pi$ popping up in places we wouldn’t expect?

What are some interesting cases of $pi$ appearing in situations that are not geometric ?

All $zeta(2k)$ are bounded sums of squares, are they not ? And the equation of the circle, $x^2+y^2=$ $=r^2$, also represents a bounded sum of squares, does it not ? :-) Likewise, if you were to read a proof of why $displaystyleint_{-infty}^infty e^{-x^2}dx=sqrtpi$ , you would see that it also employs the equation of the circle! $big($Notice the square of x in the exponent ?$big)$ :-) Similarly for $displaystyleint_{-1}^1sqrt{1-x^2}=int_0^inftyfrac{dx}{1+x^2}=fracpi2$ , both of which can quite easily be traced back to the Pythagorean theorem. The same goes for the Wallis product, whose mathematical connection to the Basel problem is well known, the former being a corollary of the more general infinite product for the sine function, established by the great Leonhard Euler. $big($Generally, all products of the form $prod(1pm a_k)$ are linked to sums of the form $sum a_kbig)$. It is also no mystery that the discrete difference of odd powers of consecutive numbers, as well as its equivalent, the derivative of an odd power, is basically an even power, i.e., a square, so it should come as no surprise if the sign alternating sums $(+/-)$ of the Dirichlet beta function also happen to depend on $pi$ for odd values of the argument. :-) Euler's formula and his identity are no exception either, since the link between the two constants, e and $pi$, is also well established, inasmuch as the former is the basis of the natural logarithm, whose derivative describes the hyperbola $y=dfrac1x$, which can easily be rewritten as $x^2-y^2=r^2$, following a rotation of the graphic of $45^circ$. As for Viete's formula, its geometrical and trigonometrical origins are directly related to the half angle formula known since before the time of Archimedes. Etc. $big($And the list could go on, and on, and on $!ldots!big)$ Where men see magic, math sees design. ;-) Hope all this helps shed some light on the subject.

I know I'm six and a half years late, but you would enjoy this 3Blue1Brown playlist: https://www.youtube.com/watch?v=d-o3eB9sfls&list=PLZHQObOWTQDMVQcT3414TcPMeEYf_VtPM

The problem is, given a directed graph, to find a min-size subset $S$ of the edges that preserves all reachability relations between pairs of vertices. (That is, for every pair $u, v$ of vertices, if there is a path from $u$ to $v$ in the original graph, then there is such a path that uses only edges in $S$.) The problem is NP-hard. This was the first poly-time algorithm with approximation ratio less than 2.

Stirling's Formula : $n!sim (n/e)^nsqrt {2pi n}.$ It is fairly easy to show that $n!sim (n/e)^nsqrt {kn}$ for some $k$ but to show $k=2pi$ is more subtle, and is basically the same as finding the Wallis Product for $pi.$ Which Wallis did before Newton, that is, before calculus.

Answered by DanielWainfleet on October 19, 2020

[This is too long for a comment to Vadim's answer.]

Here is an unexpected appearance of $pi$:

Two real numbers $x$ and $y$ are chosen at random in the interval $]0,1[$ with respect to the uniform distribution. What is the probability that the closest integer to $x/y$ is even?

The closest integer to $x/y$ is:

Therefore, the probability $p$ is the $1/4$ plus the area of the grey shape: 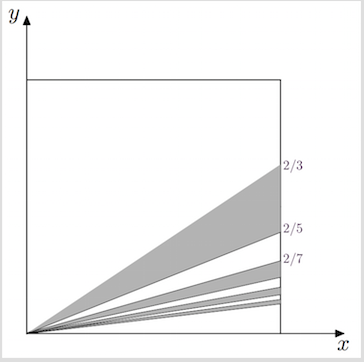 In other words, we get, using the famous Madhava-Gregory-Leibniz series:

(Here is a derivation from Leibniz's formula, which, ironically, Leibnitz proved geometrically.) 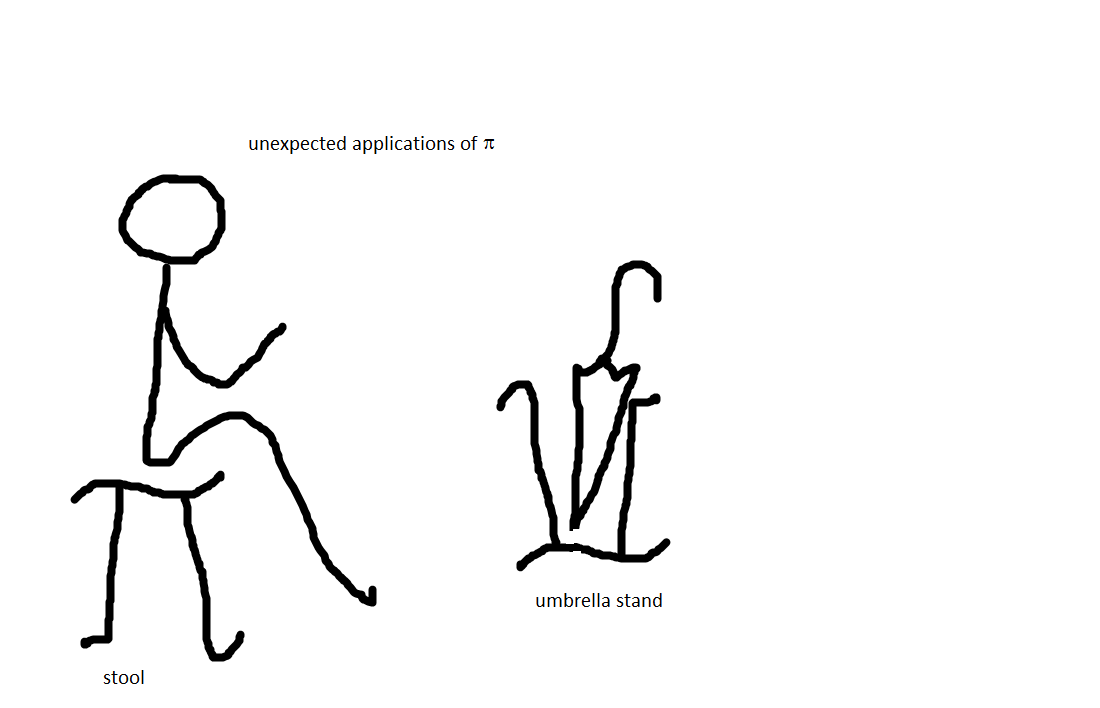 The first time I observed this fact ,I was totally blown away,kindly see my answer here.

$pi$ as a matrix eigenvalue

If we perform this exact same process for $m=1000$, we find that the square root of the absolute value of largest eigenvalue is $3.14159$.

It can be proved that the limit as $mrightarrowinfty$ of this process yields exactly $pi$.

But if the data are drawn from a normally distributed population, then Student's t-test is on home turf and its power benefits from the data fulfilling its assumption of normality. The U test is now at a slight disadvantage. Compared to the t-test, its ARE drops to $frac{3}{pi} approx 0.955$.

The "Buffon's needle experiment" says that if a needle of length $l$ is tossed on a paper ruled with lines with $d$ distance apart and equidistant from each other and also $l<d$, then the probability of the needle crossing one of the ruled line is

Consequently, if $l=d$, then $pi$ can be calculated as

Although the theorem of Gauß-Bonnet is clearly geometrical, it does not seem to be related to circles, so I think it's quite surprising to so $pi$ here.

This does not seem geometric, though it is in several ways.

The probability that two positive integers are coprime is $frac{6}{pi^2}$.

This is too long for a comment, but this regards the $frac{pi}{4}$ series mentioned earlier.

A full explanation is beautifully done in a comment here.

Answered by neofoxmulder on October 19, 2020

I always found it interesting that $e^{-zeta'(0)} =sqrt{2pi}$, which can be interpreted as the regularized product $1cdot2cdot3cdots infty = infty!$. See here.

$pi$ and the Mandelbrot set 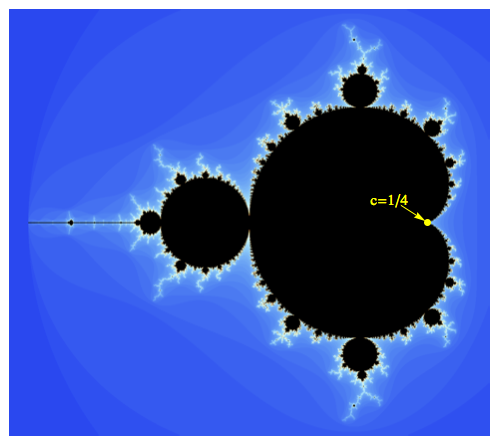 We now ask the following: given $delta>0$, how many iterates $N$ does it take until $z_N>2$? Here are the answers for several choices of $delta$:

In fact, if $N(delta)$ represents the number of iterates until the iterate value exceeds two, then it can be proved that $$lim_{deltarightarrow 0^{+}} N(delta)sqrt{delta} = pi.$$

I don't know if this is what you are looking for, but the formula for $pi$ discovered (somehow) by Ramanujan sometime around $1910$ is given by,

If there is a geometric interpretation for this, I would like to know.

This formula can find arbitrary digits of pi without calculating the previous.

When I first encountered the normal distribution in my high school statistics class, I was shocked to discover pi in the normalization of the Gaussian integral:

The statistical of analysis of data is about as far removed from purely geometric situations as I can think of.

Answered by Martin Argerami on October 19, 2020

I'm not sure what you mean by "geometric". If you mean ratios of circumference to diameter and such, then I think this might fit your criterion. :) Nevertheless, this is such a beautiful formula that I felt it was worth mentioning.

I think it is the simplest form that may have some geometric interpretation. Actually, once I discovered this expression in high school, I spent some time thinking about what the geometric explanation for this might be, but don't think came up with something nice.

Is a convex set of permutation matrices $ntimes n$ ($mathbb{P}_{n}cap mathbb{C}$) a singleton?

Is a directed graph different from a flow graph?

Is there any visual representation on why (certain) trigonometric functions have infinite derivatives.

Rational singularity of Spec, Proj and Spec of localization of a standard graded $2$-dimensional ring

Determine the lie algebra of the subgroup of SO(4)

How to use general recursion to generate a set of words?

Calculate Hessian of a “weird” function

Find volume under given contraints on the Cartesian plane.

Equivalence of Classical Nullstellensatz to “Affine schemes have points”

A donut shop sells 12 types of donuts. A manager wants to buy six donuts, one for himself and 5 for his employees.

A compact normal operator is diagonalisable.

Integral with an index

sequences and series  supremum and infimum