Proof that the coefficients of formal power series must match

Say I have $f(z) = sum_n^infty a_n z^n$ and $g(z)= sum_n^infty b_n z^n$. Now suppose that
$$f(z)=g(z)$$ for infinitely many $z$ that are not discrete. Why is it true that we can match the coefficients of the power series? I have seen answers say because we can write

Any help would be greatly appriciated.

Now if $0$ isn't actually an accumulation point, we have to do some more work. I suggest you try drawing the discs I mention on paper. Let $U_R(0)$ be the disc of convergence (and $R$ the radius of convergence). Somewhere in this disc (not on its boundary, which you should probably state more clearly instead of just saying that the set is not discrete, because otherwise this doesn't work), there is an accumulation point $z_0$ of the set where $f=g$. We take this point and expand $f$ and $g$ around this point $z_0$. We will get two different power series for $f$ and $g$, with new coefficients. But to these two new power series we can apply the argument from above, so their coefficients are equal. We also know that their disc of convergence is at least $U_{r_0}(z_0)$, where $r_0$ the largest possible radius such that $U_{r_0}(z_0)subseteq U_R(0)$. On this disc, the power series expansions of $f$ and $g$ are equal, so $f$ and $g$ are equal. So every boundary point of this disc $U_{r_0}(z_0)$ is an accumulation point of the set where $f=g$. And apart from the single shared boundary point with $U_R(0)$, they are also contained in $U_R(0)$. Now choose the boundary point of $U_{r_0}(z_0)$ which is closest to $0$. Call it $z_1$. Around this point we can also expand $f$ and $g$ as power series, again with a disc of convergence that is the largest possible one such that it is still contained in $U_R(0)$ (or larger). Its radius, let's call it $r_1$, will be twice that of $U_{r_0}(z_0)$. And on this disc, the functions are again equal, so its boundary points are again accumulation points of the set where $f=g$. Repeat the argument until $0$ is contained in the disc (which happens after a finite number of steps). See Maths Wizzard's excelent visualization below. At this point $0$ must be an accumulation point of the set where $f=g$, so we can finally apply our original argument to the power series. 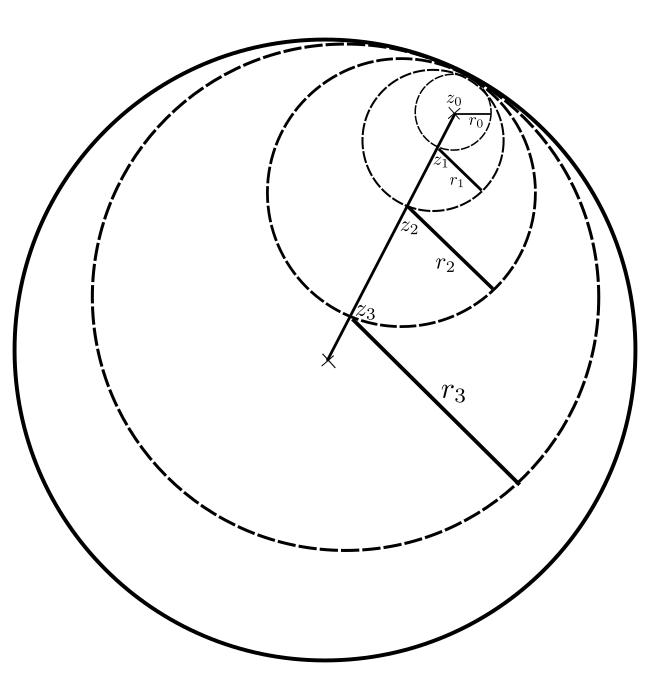 Correct answer by Vercassivelaunos on December 26, 2020

Polynomia $z^n$ are a basis of the vectorial space of polynomia, so if two vectors are equal, they have the same coefficients in any basis.

A different way of understand it is using derivatives. Evaluating any polynomius at $z=0$, it is obvious that if $f(z)=g(z)Rightarrow f(0)=g(0) Rightarrow a_0=b_0$. You also can do it taking derivatives!

Express the accumulated amount in the bank as an explicit formula

Which of the following sets of boolean functions is functionally complete?

How to decompose a number sequence into convergent subsequences?

How to approximate the peak of an epidemic (depending on epidemiological parameters)?

Is there a thing as a “Negative Dimensional Space”?

Abelian finite groups and their subgroups

Relation between spectral radius when the norms are equivalent