Consider a very large integer $z$ that we want to factor (not necessarily prime factorization, but finding $pq = z$). 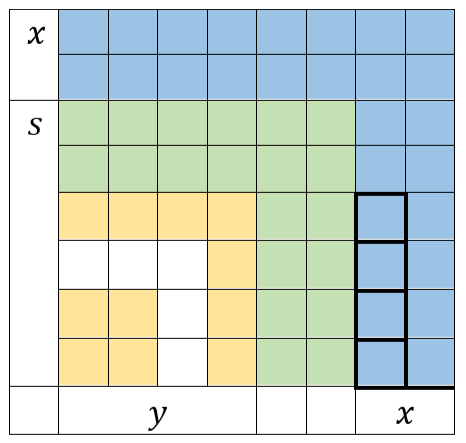 Say we have $z$ unit square tiles. We start laying them out as squares.
The squares up to the green ones in the layout is the largest square we are able to form with $z$ tiles and the square tiles that are enclosed in thick black border are the residual tiles that are not part of a complete square.

So, we have the equation

This is a Diophantine equation of the form $x^2 + 2ax – y^2 = b$ given in the question where the coefficients on the LHS and the constant on the RHS have been replaced with $s, c$ respectively.

Noticing that the LHS is a quadratic form, we can choose $y$ as a parameter where $-y^2 = uv$ for integers $u, v$ and $u + v = 2s$. If we are able to find such a $y, u, v$, we can represent the LHS as the product of two linear factors in $x$. We would have reduced the factoring of a large $z$ into a smaller problem of factoring hopefully a small $c$.

We could then recursively perform factorization of $c$ using the same procedure until we get to a $c lt beta$, a smooth bound where we could just do trial division.

Find an example of sets of cosets of different cardinality

How do you generally tell the independence of events in a probability problem when it is not outright stated?

Why this map is birational?

Can’t argue with success? Looking for “bad math” that “gets away with it”

The topology generated by open intervals of rational numbers

If the solutions of $X’=AX$ have a constant norm then $A$ is skew symmetric.

Show that $f$ is a strong contraction when $f$ is continuously differentiable.