According to this study 1, hydrogen peroxide is not absorbed by the skin, but can cause systemic toxicity when inhaled or ingested. I am not entirely sure how often hydrogen peroxide is inhaled or ingested when used in dentistry for the treatment of gingivitis, periodontitis or tooth whitening. And could not find any studies that indicate such data.

A new theory on vitiligo suggest that vitiligo is caused by oxidative stress in association with high levels of hydrogen peroxide 2 3. Preferred sites of vitiligo vulgaris are face, hands, feet, genitals, and generally around body openings and in areas where the skin is irritated by friction, abrasion, pressure from blemishes (Koebner phenomenon).

There are several components to this question:

I will provide some evidence and discussion for each of these points below.

Hydrogen peroxide is the simplest peroxide (a compound with an oxygen–oxygen single bond). It is used as an oxidizer, bleaching agent, and antiseptic. Concentrated hydrogen peroxide is a reactive oxygen species and has been used as a propellant in rocketry. Its chemistry is dominated by the nature of its unstable peroxide bond. 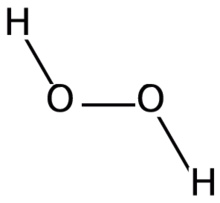 This paper is a review of the use of hydrogen peroxide in dentistry.

The levels of H2O2 in toothpastes and dentifrices are generally much lower than those used for teeth whitening or bleaching.

Studies in which 3% H2O2 or less were used daily for up to 6 years showed occasional transitory irritant effects only in a small number of subjects with preexisting ulceration, or when high levels of salt solutions were concurrently administered.

So concentrations below 3% seem unlikely to cause significant harm. Beneficial effects (such as improvement in gingival disease and promoting healing due to an antimicrobial effect) are seen at concentrations above 1%.

Based on this, a window of 1-3% concentration of H2O2 would appear to be optimal.

A UK government toxicological report confirms that H2O2 only causes local toxicity by irritation and cellular damage, but it does not cause systemic problems and is not considered a carcinogen.

H2O2 is a byproduct of many biochemical reactions and is toxic to cells. The enzyme catalase is found in nearly all living organisms exposed to oxygen (such as bacteria, plants, and animals). It catalyzes the decomposition of hydrogen peroxide to water and oxygen. It is a very important enzyme in protecting the cell from oxidative damage by reactive oxygen species (ROS). These are also known as free radicals.

The reaction is shown below.

The toxicity of H2O2 is due to oxidation of proteins, membrane lipids and DNA by the peroxide ions. The class of biological enzymes called superoxide dismutase (SOD) is developed in nearly all living cells as an important antioxidant agent. They promote the disproportionation of superoxide into oxygen and hydrogen peroxide, which is then rapidly decomposed by catalase to oxygen and water.

Oxidation is one of a pair of opposite chemical reactions involving transfer of electrons; oxidation and reduction. Together they are known as redox reactions.

Oxidation is the loss of electrons or an increase in the oxidation state of an atom by another atom, an ion, or a molecule.

Reduction is the gain of electrons or a decrease in the oxidation state of an atom by another atom, an ion, or a molecule.

In a redox reaction, one component is oxidised and the other reduced.

Another example of a redox reaction is the oxidation of glucose to release energy in cellular respiration.

Catalase uses the oxidising power of H2O2 to oxidise other potentially harmful substrates that need to be broken down (like phenols, formic acid, formaldehyde, and alcohol), while the H2O2 itself is reduced in the process. This is called the peroxidation reaction.

Catalase is present in all cells (especially the liver and kidneys). Apart from local tissue destruction, small amounts that might be absorbed would be broken down in this manner.

Vitiligo is a condition in which melanocytes in patches of skin cease production of the pigment melanin.

There are several theories about its pathogenesis. It is associated with certain genetic susceptibility markers and also with other autoimmune disorders, suggesting an autoimmune process. The autoantigen is likely to be the tyrosinase enzyme, which is involved in melanin biosynthesis.

This research paper discusses oxidative stress in the context of vitiligo.

In vitiligo, melanocytes are particularly vulnerable to oxidative stress owing to the pro-oxidant state generated during melanin synthesis and to the genetic antioxidant defects.

In particular, with relevance to catalase:

In both lesional and non-lesional skin of vitiligo patients, increased levels of reactive oxygen species (ROS) were observed, accompanied with reduced levels and activity of catalase.

It is well known that normal melanocytes are vulnerable to excessive reactive oxygen species (ROS) for their specialized function of melanin synthesis, which would result in a highly pro-oxidant state in the epidermis.

This imbalance between the pro-oxidants and the antioxidant status can disrupt the homeostasis of melanocytes, causing accumulation of oxidized and damaged proteins or organelles, and consequently lead to the destruction of melanocytes.

So there is evidence of increased oxidative stress in the pathogenesis of vitiligo. However, it is a complex picture, with probable environmental triggers and genetic susceptibility factors. An autoimmune process and oxidative stress are not mutually exclusive, as the former could disable the cellular mechanisms for dealing with the latter.

4: Can absorbed hydrogen peroxide contribute to the pathogenesis of vitiligo due to an increase in oxidative stress?

Essentially, assimilating this information, the answer seems to be no.

Applied hydrogen peroxide (H2O2) primarily causes local irritation and tissue damage, depending on the concentration. It is not significantly absorbed and small absorbed amounts would be quickly broken down by catalase.

While increased susceptibility to oxidative stress in melanocytes plays a role in the pathogenesis of vitiligo, it is a disruption of the cellular mechanisms for managing oxidative stress, rather than a primary increase of oxidants (like hydrogen peroxide) that is the main factor.

Does the damage from sun exposure outweigh the benefit of getting vitamin D?

What are the likeliest causes for rising indirect bilirubin levels?

What are non-specific somatic sensory receptors in the nasal mucosa?

Does ingesting creatine powder or capsules cause hair loss?

Why do semilunar valves not need tendinae but atrioventricular valves do?

Can cancer incidence rates, calculated from the general population, be used in primary care?

Why is there no generally accepted system of disease classification?

How did COVID-19 jump the species barrier?

Is eating straight sugar ok, as long as I eat it with fiber?

Do 50% of individuals with a history of BCC will develop another one within 5 years of diagnosis regardless of the age of the individual?

Fats in nutrition information does not add up. Where are the unknown fats coming from?

The process of drug approval; The flow from R＆D, planning a clinical trial to drug approval, or other additional process

Cholesterol: How can you lower LDL and maintain OR raise HDL?