In the third season of The Leftovers, episode 3, there is a scene where Kevin Garvey, Sr. calls Matt Jamison from a pay phone outside of Melbourne, AU. Matt is in Miracle, TX, however both locations show that it is the middle of the day.

There is a 15 hour time difference between these locations; Australia is 15 hours ahead of Texas. That means that in order for there to be daylight in both locations there needs to be 15 hours difference between sunrise in one location and sunset in the other location. Also keep in mind the scene in question takes place in early fall, given the whole season takes place over about a weeks time leading up to October, 14th. The phone call seems to be several weeks prior to this so I’m guessing sometime in September.

So is it possible for there to be daylight in Australia and Texas at the same time? My own calculations say no, but I’m not sure if I’m missing something.

Let's go with your assumption that the call took place in the middle of September.

Answered by Alexandre Aubrey on October 23, 2021

I don't know what day the scene takes place, but assuming it is today, 8th July 2020, then Wolfram|Alpha1 calculates that the sun rose in Melbourne 4 hours before it set in Austin. The additional day is due to the cities being on opposite sides of the international date line. For 8 Jan there is 4.5 hours of shared sunlight.

Others have answered that it is, at the very least, possible for it to be daytime in both places but impossible to be midday in both places. I'd like to answer a related question, "how close to solar midday can both these locations get, and when?"

As for "how high," that is easily found by taking half of the great-circle distance between the two places and converting it to degrees on the Earth's surface. Using Austin as a stand-in for the uncertain location of Miracle, we find that to be 64.3 degrees from noon, or 25.7 degrees above the horizon in both locations.

As for when, that's a little bit trickier. The midpoint of the shortest great-circle path between Melbourne and Austin lies at (-7.200, -152.217) in the central Pacific ocean (obtained via Google Earth). The answer to this question is, "When will the subsolar point come closest to this location?"

Comparing times is not a great way of checking for daylight as time zones are very unevenly distributed.

solar "noon" can occur as late as 15:00 in western portions of China

Better to just some simple geometry, logic, and, as pointed out in the comics, some knowledge about Earth's movements relative to the Sun:

then there must be some time when any two points are both in daylight.

Alternatively, just look at a globe and try to see both Texas and Australia at the same time: 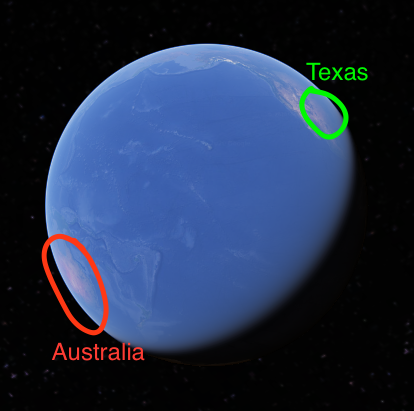 On a Summer’s day like today, 08 July 2020, the sun will rise in Texas at about 6:30 AM and set about 8:30 PM Central Daylight Time. The sky will be light around 30 minutes before sunrise and about 30 minutes after sunset. That is roughly 15 hours of daylight. Theoretically, first light and last light may happen simultaneously in the two locations during the Northern hemisphere summer months. Unfortunately, the US Navy sunrise/set calculator is currently down for service for me to make a more scientific analysis.

Google says 8am in Melbourne is 5pm in Austin

It's technically on a different day, which is possibly where the confusion lies, but around September both would be somewhere near equinox, so both should be in daylight around that time.
15 hours one way is 24-15=9 hours the other way, crossing the International date line.

What exactly is this event?

Scene in Jerry’s House in The King of Comedy

plot explanation  the king of comedy

What does this joke mean from the cartoon Marvel’s Spider-Man episode “Horizon High: Part Two”?

Luke’s failure at the cave

Why did the U-96 waste a torpedo on a crippled tanker?

How come no one realizes that the Narrator in Bly Manor was talking about them?

the haunting of bly manor

Did Andy know all along?

Why did the Twilight Zone not feature a more diverse cast?

Why did Tom Hayden consider kid as a pocket protector?

plot explanation  the trial of the chicago 7

How can there be a baby Yoda in “The Mandalorian” when the Empire hasn’t been formed yet?

Is it required to watch The Big Bang Theory to understand the plots of Young Sheldon?

Why does Weyland have to hide that he was on the ship?

Is it just a coincidence that five Mulan movies were released in China this year?

dialogue  its always sunny in philadelphia

Why is the HBO “stinger” sound a semitone lower in English than in German?

Who was Angel Eyes trying to shoot first?

plot explanation  the good the bad and the ugly