Does the Joker love Harley Quinn?

I have seen Harley Quinn and Joker together so many times in Batman: The Animated Series. Now waiting for Suicide Squad. I want to know a bit more about their relationship in the existing TV shows they appear in. Specifically, does the Joker really love Harley or is he just playing games?

Actually, the original writer for the Joker created Harley as his love interest based off of "a friends stormy relationship". Quoting said writer, along with the Harley and Joker's voice actors:

Arleen Sorkin: Everyone sees the Joker laugh. Only Harley has ever seen him cry.

Mark Hamill: The Joker learned to have emotion through Harley.

It's been in comics since Harley became his love interest. Yes, I guess you can say "hit it and quit it" was the Joker's original plan. Do you know how most studs like to play today? Use a girl for what's good for them at that time. He admits to himself over and over again in series and comics that he does have feelings for her. He also is very intelligent enough to know she is also a weakness for him. He can't kill her. Something always keeps him from doing so. Yeah, she fell for the lies, she figured that out, yet still stayed. Why? She sees the real him, the single rose. That is an old sign of endearment.

He freed her from fear of repercussions, and made her stronger both physically and yes mentally. As Dr. Qunizel, she had to put up with all kinds of nosense and formalities. She had no control over her life at all. No one cared about the patients of Arkham; only she did. Now, he creates Harley. Fearlessness when it comes to danger. She can take a life without hesitation. Her life or theirs.

The only thing she can't handle is losing the Joker. A love in her eyes, her only true friend. Doesn't everyone go a little emotionally unstable when they go through a breakup? When their lover tries to push them away? Yes, some versions show violence between the two, but only the revamped versions, so they can try and push her into a relationship with Ivy instead.

Yes. The Joker does love Harley, the only problem is he doesn’t want to. The Joker knew he was making her fall in love with him and he wanted to use that to his advantage. Overtime, the Joker started to feel something for Harley and he got scared and angry. He didn’t think he could be loved and he didn’t want to be loved, so he thought that he could use Harley, but in the process he ended up falling for her and he didn’t like it. Therefore, he thought that treating her wrongly would make his love for her fade, but it never did. There were multiple occasions where the Joker could have killed Harley and gotten rid of her for good, but he decided against it. The joker does love Harley, and they both have an unbreakable bond, I mean they did both literally drive each other insane. If that’s not love, what is?

“Sometimes we hurt only those people to whom we love most...”
-Alok Dwivedi

Joker can love and I believe he loves Harley. Some guys are very bad at showing emotions but, that doesn't mean they don't love anyone. A lot of people think that since Joker is a psychopath, and anyone who is a psycopath automatically can't love anyone. That is not true. Just because someone is different than how you or me act doesn't mean they can't love. Some people say I am mean that doesn't mean I don't love my boyfriend. Joker does love harley he just doesn't really do emotions. How many times has joker saved Harley? think about it before you assume.

No he doesn't. The sucide squad just glamoured their abusive relationship. Joker doesn't love anyone. He is only obsessed with Batman. The Arkham games touch on this. As well as a Death in the Family comics. Frank Miller and Grant Morrison have also shown how Joker is perverse in a semi-homoerotic fixation with Batman. For those who still doesn't understand Harley/ Joker need to read Mad love. Joker and Harley relationship is only to show how abusive and controlling he is. The animated series is to highlight how a phycopath can get advantage of a girl who blames herself when she doesn't please a man.

The suicide squad and any attempt to make Joker/Harley about "he beats her but deep down he loves her" doesn't understand how deep and rich Harley Quinn character truly is. The movie is a bad representation of Harley and Joker relationship. In her true character form she loves him, and he takes advantage of this to escape justice and use her. Harley Quinn is Paul Dini and Bruce Timm creation, the way they have always written her has never shown Joker truly caring about her at all.

Sorry old post, but I felt I needed to answer you. Whomever read this don't get fooled by the movie. Is already bad enough that young people today think violence is awesome and normal, and now to let them think abusive relationships like Harley and Joker are the new cool fashion just destroys the intent of Harley Quinn's character. This is my personal opinion though, but my answer above about the comics you can search on Google.

Answered by LateNightOwl on November 17, 2021

In the movie he makes her fall in a vat of whatever because she kept bothering him about going out. He almost leaves but I'm guessing something in his head tells him to save her. Also the Joker risks his life to save her from being apart of the squad and breaks her out of jail. In a confusing scene the artist Common plays a part, in which Joker gives Harley to Common. And when he refuses saying he doesn't want "beef" and "that's your lady Joker" Joker kills him.

Well in the 2016 movie Suicide Squad, it shows that The Joker cares for Harley. Yes, he was abusive but that is only because he is crazy. He wouldnt leave Harley behind and would do anything to free her.

The Joker has been characterized as psychopathic/sociopathic paramour to Harley Quinn in many mediums. Different shows have different takes on the relationship, from actual love to purely psychopathic control. As the Joker is the epitome of an unreliable narrator, nothing he says can be taken at face value. As he says regarding how he became the Joker:

I... I'm not exactly sure what it was. Sometimes I remember it one way, sometimes another... If I'm going to have a past, I prefer it to be multiple choice! Ha ha ha!
-The Killing Joke

He could actually love, or feel romantically inclined towards Harley one second, and the next he couldn't give a flying bat about her. Sometimes he actually fears her. In any case, it's always, always domestically abusive, and he starts the relationship by manipulating her in the flashback of The New Batman Adventures adaptation of Mad Love, but earlier episodes have different views. Batman obviously doesn't think Joker can love anyone, and painfully explains many things to Harley. She doesn't believe it (Battered Spouse Syndrome).

But the Joker is also willing to compromise for what she wants, even as going as far as kidnapping Robin to make a "family" as seen in Batman Beyond.

The Suicide Squad animated movie Assault on Arkham has him showing anger that she's found someone new. But it ends up being an less than honest double play.

Newer material puts a very much darker twist on the relationship than the original cartoon. In the comics, they are no longer together. Violently.

That said, there was the time Harley wanted to kill him, almost did if it wasn't for the fake gun, and Joker just turned around and said he loved her instead of hitting her.

It's also done in the comics. One issue of The Batman Adventures Vol. 2 (In continuity with the Bruce Timm Batman cartoons) has Harley inheriting a fortune, so the Joker does a bunch of things so that he can legally marry her and plans on killing her after for the money, but turns out she set the whole thing up so he would do just that, planning on telling him after getting married so he won't kill her any more. It works. He thinks its Romantic. Batman is not amused. 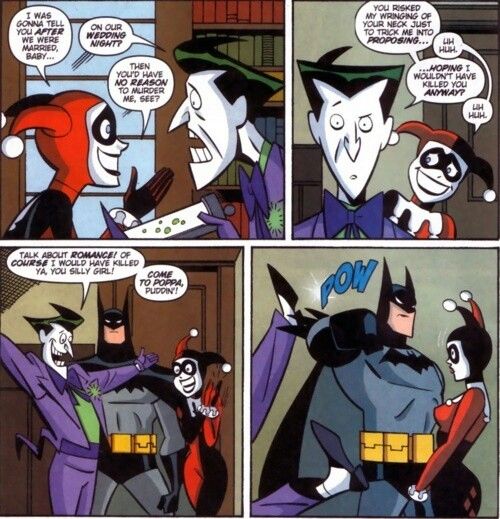 In short, because of the Joker's psychopathic state, we can never know, and it's always up to the writer of the version you are watching. Joker's feelings towards Harley varies from love to "she's entertaining" to "she's useful".

What exactly is this event?

Scene in Jerry’s House in The King of Comedy

plot explanation  the king of comedy

What does this joke mean from the cartoon Marvel’s Spider-Man episode “Horizon High: Part Two”?

Luke’s failure at the cave

Why did the U-96 waste a torpedo on a crippled tanker?

How come no one realizes that the Narrator in Bly Manor was talking about them?

the haunting of bly manor

Did Andy know all along?

Why did the Twilight Zone not feature a more diverse cast?

Why did Tom Hayden consider kid as a pocket protector?

plot explanation  the trial of the chicago 7

How can there be a baby Yoda in “The Mandalorian” when the Empire hasn’t been formed yet?

Is it required to watch The Big Bang Theory to understand the plots of Young Sheldon?

Why does Weyland have to hide that he was on the ship?

Is it just a coincidence that five Mulan movies were released in China this year?

dialogue  its always sunny in philadelphia

Why is the HBO “stinger” sound a semitone lower in English than in German?

Who was Angel Eyes trying to shoot first?

plot explanation  the good the bad and the ugly