What is the .onion URL at the end of Unfriended: Dark Web?

The first half of the end credits to Unfriended: Dark Web is made to look "hacker-y" by adding the movie credits as comments to some source code. A cursory glance through the code gave me the impression it is the source code for Samba. So far so good. However, at one specific point, something caught my attention: One of the lines of code had a comment with a .onion address on it (last few lines of the screenshot below): 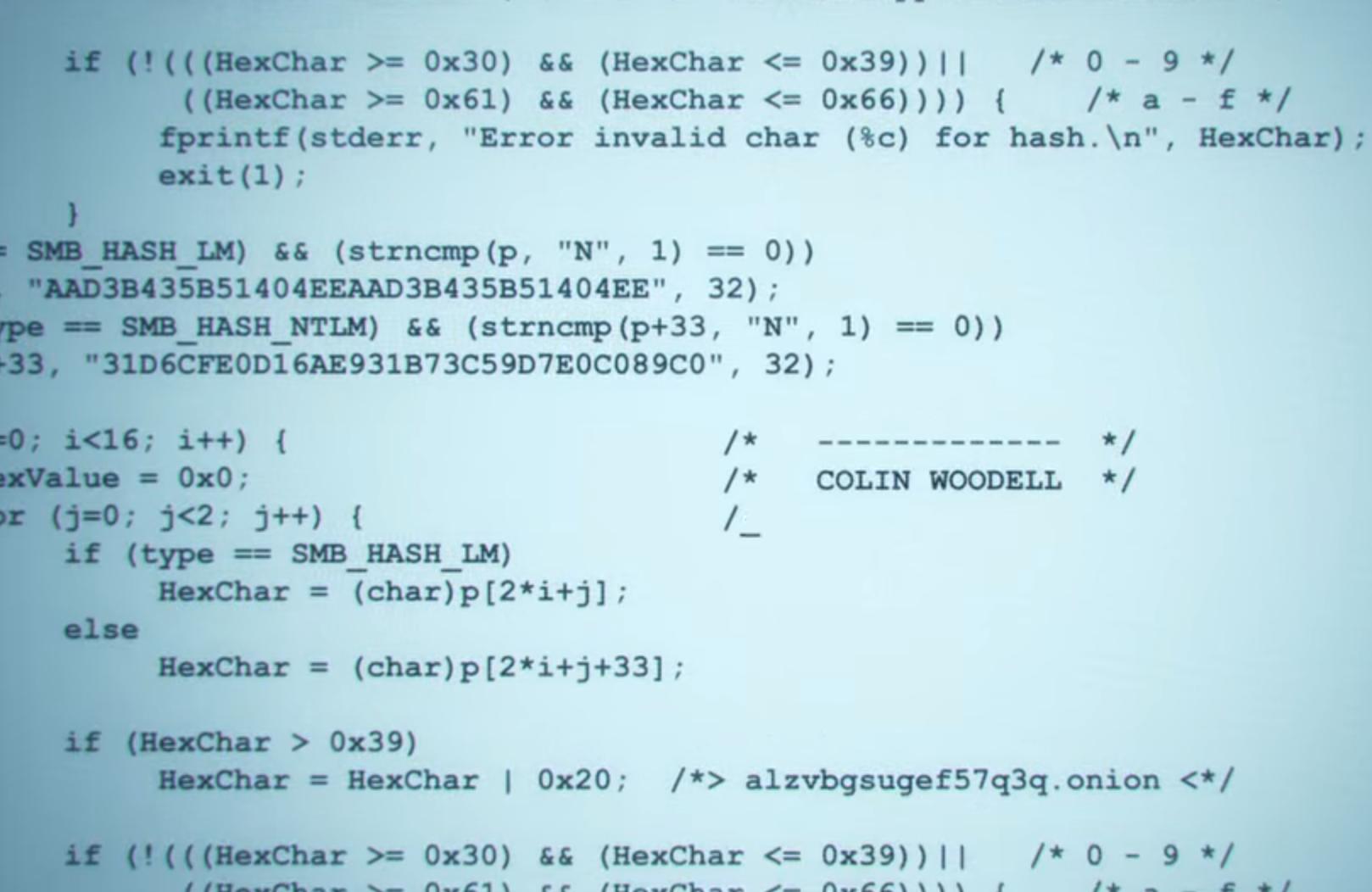 This happens at -2:26 left (Netflix won’t show me running time, only remaining :S). This instantly struck me as odd. I watched the rest of the credits but didn’t see anything else that looked suspicious to me.

Since the entire movie deals with the "Dark Web", it could very well be that the information that used to be in that dark web link actually furthers the plot in the movie. It could be additional content, information about what happens after the ending, more info on the culprit(s), etc. So I went looking to try and find out if this was an Easter egg of some sort.

First I tried the most obvious of Googling it, but got no results. So it does not appear that this has been discussed before. Then I went to the Tor Browser and attempted to reach that address, but nothing loaded (site down probably). At this point, I thought of looking up the original source code to see if by any chance that address was there. I believe I have found a few places where that code is used, but unsurprisingly the comment there is different:
Example 1
Example 2

Those two examples are not however identical to everything that is on screen; either the code on screen is older/from somewhere else, or the producers intentionally mixed and matched different sections for artistic/copyright/some other effect. Regardless, it would strike me as very odd that this exact same block existed somewhere else, but the only change was changing a comment from "convert upper case to lower" to an unexplained .onion address 😀

So in short, my question is, does anyone know what used to be at that address? Is in an Easter egg of some sort? In the movie’s IMDB trivia page, it states that "The trailer was uploaded first in the real dark web by the director himself." Could it be that?

Why did General Erinmore quote a Rudyard Kipling line here?

How did “adult” themed shows get on CITV?

Why does Hollywood not use foreigners in foreigners’ roles?

Who invented the time machine in Eve’s world?

How can “The Hot Priest” do this in the second season of “Fleabag”?

How could Claudia know of this?

What was the Architect’s role?

What do all the hitmen in John Wick 2 who live like tramps do all day?

Origin of the titles “Doctor” and “Master” from Doctor Who

Why did Bruce get suspicious of Oswald?

all grown up  character  rugrats

What was Melanie Cole’s fantasy?

character  the man in the high castle

Who pioneered the use of Laughing Kookaburra birds to create the impression of a jungle setting?

Can the magic ticket be used more than once?

Is the Land of Ooo really a post apocalyptic Earth?

Why did the train need to keep moving?

Could someone explain the Kevin Bacon joke in Guardians of the Galaxy?