How can I stop my cat from removing her cone?

I just got my cat back from being spayed. She’s got the stitches, and she’s supposed to wear the cone for a week to stop her from licking them. Problem is, we’ve gotten the cone on her four times now, and she’s managed to pull it off all four times.

I really don’t want to hurt her, and I know she doesn’t like the cone at all. I have to go to work, so I can’t supervise her 24/7 to stop her from licking. But how can I make sure she can’t take the cone off at all?

my two cats were just spayed & neutered. What I did to keep the cone on was took the ribbon out that the vet supplied and put the collars they already wore in place. It worked like a charm. They were never able to get it off because they couldn't untie the ribbon (:

I too had the problem of my cat Fonzie (now nicknamed "Houdini") pushing the cone off his little head. What I did works great I used a halter and attached two loops of the cone to the halter on his back and the one front loop to the part where the halter sits on his chest. It is a halter one would use with a leash on to take the cat for a walk. He isn't happy and I wish I could make him understand it is temporary and for his own good. Love my cats so much and one can never say cats aren't smart.

I have a large (strong) grown up cat, who've had a major operation on his hind quarters, and needed a hard plastic cone to keep him from biting the stitches.

It isn't super important exactly how you tie it - just keep it behind the front legs and cross onto the back. That way, when the cat tries to pull it off, it will pull against his front legs, and the cat will stop pulling.

This is a sketch of how the ribbon could run: 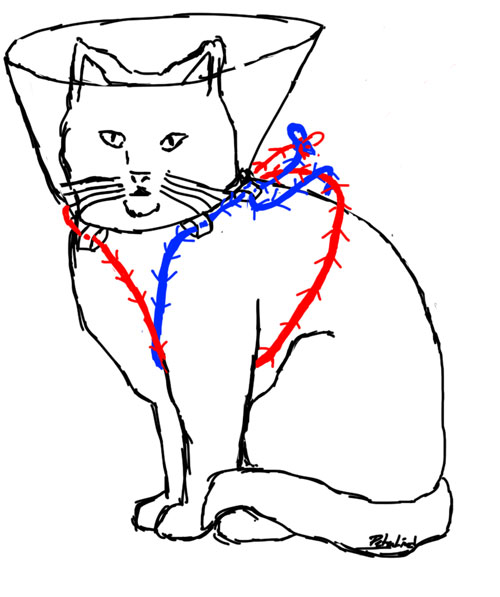 The red and blue are both ends of the same string - they start at the middle, just behind the head of the cat - and run across the breast and under the front legs. Then somehow they are tied together on the back of the cat. It doesn't matter exactly how they connect at the back, but I like to run them once more through one of the loops on the cone.

Technically it would still be possible to pull the legs out of the loops, and pull of the cone, but so far my cat hasn't figured that out.

I visited 4 vets when I was about to neuter my cat. Only one of them recommended a cone after the procedure. The rest said it's very unlikely she will lick or nibble on the stitches, and in the rare case she does, we will deal with it then, as it is also unlikely she will be able to do irreversible damage before I notice it.

I also know that most vets do some plastic surgery on top of the stitches, so they are less obvious and less accessible. Do ask the vet if he includes that in the operation.

I ended up not using a cone (and sticking with one of the vets who were against it, for other reasons), and she never even tried to access the stitched area before it healed. Of my dozen or so cat-owner friends, none of them has used a cone and none of their cats licked or touched the stitches.

I'm just letting you know that the cone is an option.

Perhaps a good thing to discuss with your vet is whether it's possible for the cat to do considerable damage to the stitches within the time you are away. If not, and you decide against the cone, you will always be able to check on her when you're back home, and call the vet in the unlikely chance something is wrong.

There are a few options. Usually when the veternarian supplies cones, they are hard plastic and annoying to the cat because they interrupt peripheral vision and hearing, as well as eating and drinking.

There are soft cones available that some pets find more tolerable, Trimline is one manufacturer. These cones can be worn in the traditional "up around the head" fashion, or turned down to form a bell around the body. Some cats find the turned down position tolerable because it doesn't interfere with vision/hearing. If you get one of these collars and try the turned down position, I recommend using it while you can observe your cat to make sure that she cannot reach the stitches with the cone in this position.

Another option is a protective shirt. There are commercially available options, but you probably don't want to wait for shipping since your cat has already had the surgery. You can make a similar shirt at home.

Basically, take an old T-shirt and cut four holes in it for the cats legs. Then wrap the shirt around the cat and pin/sew it closed at/near the cat's spine. You don't want any seams near the wound/suture (belly), that should be a smooth flat piece of fabric. The shirt should be snug so your cat cannot wiggle out of it, but not so tight that it cuts off circulation. You should check the wound every 8 hours or so while it's covered, and monitor your cat when you first put on the shirt to make sure she doesn't get tangled in it.

If she licks the shirt it should be alright, but if she bites it you'll want to reinforce it with thicker fabric (like denim) over the area with the stitches. The fabric will likely stretch and wiggle, that's normal. Just repin it as necessary to keep the shirt on and covering the sutures.

What is this pimple like thing on my nursing mother cat’s nipple?

Can rabies virus survive outside host on grass or leaves under sunlight?

How to stop my 7 month old Belgian Malinois from biting, grabbing and pulling the garden hose?

How can I get my cat to not be afraid of me?

Can I feed my goldfish my red cherry shrimp?

Why does my cat never like to be picked up?

Did I make a mistake getting a 2nd cat?

Cat vomiting and not acting right

What could cause muscle spasms in a litter of piglets?

Why my aquascape shrimps died

How much exercise should a puppy get?

Why did my dog’s ears start to flop?

Why is my bearded dragon having these colors?

Will my cat be okay eating food that might be dirty?

I over correct my dog and now he’s scared

Why are my Baby bunnies Dying?