Is my hamster's (fancy dwarf) cage too small?

It’s not trying to escape or anything, but I’m just wondering if the cage is too small. Please look at picture provided. 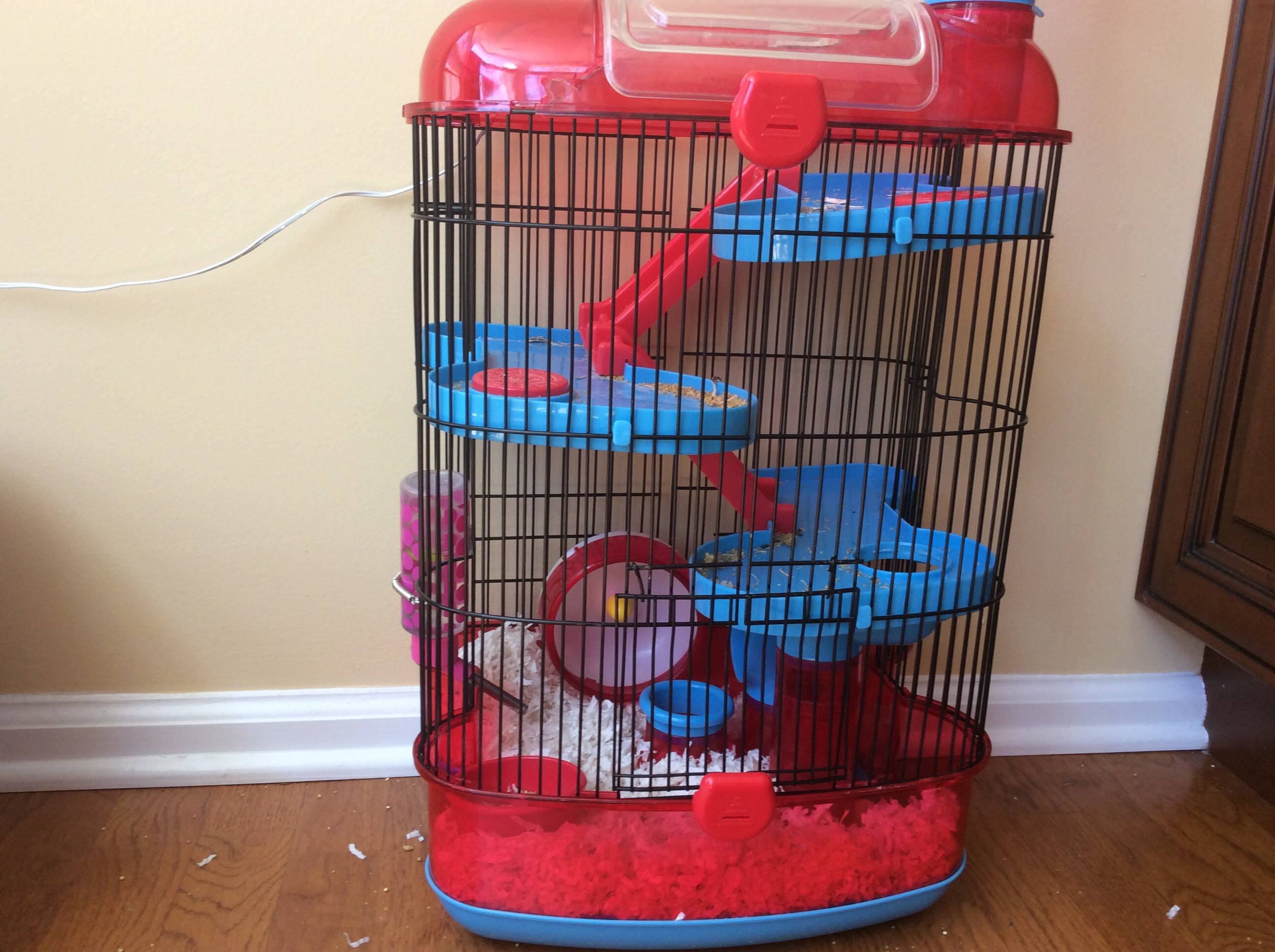 Here's what I know, I hope this answers your question:

The minimum recommendation for dwarf hammies is 1 ft2 (930 cm2) of surface area for one and an additional 0.5 ft2 (470 cm2) for each additional. With that said, the bottom dimensions of your cage are under that. You have additional levels, and it appears by the pictures (seed hulls on a few levels) that your hammie uses these levels, which would add to the surface space used. If this isn't a good depiction of his activity, and he spends most of his time on the bottom, then I'd say it's too small.

What you want, when concerning surface space is enough space for a wheel, general roaming space and his food and water area to be of distance from where he eliminates to keep the ammonia content and smell separated from food (most hammies choose one or two corners away from where they eat).

IF he uses his levels regularly, and if you moved his food dish and water bottle to one of the levels, instead of the bottom, where his bedding is, I'd say size is sufficient. It also makes it easier to clean (when he's made a huge mess with his seeds in between bedding changes, you can just remove a level or two, clean it and put it back).

If he spends most of his time on the bottom, I'd say it's a little too cramped.

I appreciate the question. It shows you care about the well being of your pet, and will help inform those who read this in the future.

If you do upgrade to a larger cage, I'd say a 20 gallon (76 liters) long aquarium with a mesh lid (not plastic, for air quality) would be enough space for exercise, and separation of food and potty. Also, plastic bottomed cages are very common, and work for most but can hold calcium and minerals from urine crystals that glass cannot, making for healthier environment over time, less erosion on the plastic (when you see plastic turning white - that's from elimination) and less scrubbing when cleaning. You also don't have to worry about him chewing on the bars.

With the big, long explanation I've put, also know, you're using a cage that A LOT of people wouldn't have initially thought to get or invested in, and his space is A LOT better than others.

Unfortunately, this is cage is not suitable for any breed of hamster.

Hamsters of all breeds need a minimum of 450 square inches (2900 cm2) of continuous floor space. A good choice of cage is a 40 gallon (150 liters) long aquarium or bigger with a DIY mesh lid. Remember, bigger is always better.

Hamsters really should have 6-8 inches (15-20 cm) of bedding in at least a portion of their cage to make room for burrowing.

I hope this helps!

How to prevent snakes from eating goldfish in pond?

Which food should not be given to a cow?

I’m very exhausted giving ear drops to my overly skittish cat. I can’t take him treating me like a threat. What should I do?

My dog eats dirt from weird places then throws up

Introducing new cat (or kitten) to kitten at home

What next for our scared shelter cat?

Could my dog get infected with SARS-CoV-2 coronavirus and suffer from COVID-19?

What do I do if my guinea pig has a swelled toenail? Is this rare?

Why do groomers tell you not to shear a long-haired dog in warm weather?

Is there a safe dose of vitamin D to give a cat?

Dog chews the fur of its companion and vomits it later

What to feed 5 week old rabbits?

Cat is in heat with about a 2 week break

Where is the best place to buy a Cockatiel?