Why does my cat never like to be picked up?

I have a 2 year old neutered male house cat. Had him since he was 10 weeks old.

He has never liked being picked up – no matter how gently we do it. He does not like being petted very often either, and if you do, after 2-3 times, he bites you very hard.

I scold him but never hit him when he does that, just leave him alone. He almost never will sit on my lap.

He does follow me around the house a lot. He gets toys, treats, very good soft and dry food, fresh cold water daily.

He never lets me hold him for more than a minute, except when he is at the vets, and I’m sure that is because he is terrified!

I love him, talk to him, and my husband and I play with him with his toys. We have never let him outdoors. I was thinking if we did occasionally would he be less aggressive and happier? But we live in the country and scared he could get hurt, etc.

Try to determine whether the cat is in pain.

Sometimes it's the case that petting is aggravating some sort of unseen medical condition, causing them pain, and so their response is to lash out at the person petting them. Usually pain is specific to some area, and so very cautiously trying to pet him in various areas can tell you if maybe the cause is pain. If the cat very obviously hates it when you touch him in some particular area, you should take him to a vet to have this checked out. A common cause of this sort of problem is arthritis, which even young cats can have.

Keep in mind, not all cats like being handled.

If medical conditions have been ruled out, then it's simply just a case of some cats are less receptive to being handled than others. Your cat clearly is still trying to socialize with you, since he's following you around the house. He just might not be the type that likes being touched too much, and if such is the case, he's never going to be a cuddly cat. But you may have some success with slowly acclimating him to more handling:

To add a few points to Kai's excellent answer.

I was thinking if we did occasionally would he be less aggressive and happier?

I don't think that will make a difference. Possibly the more the cat is indoors the more he will be used to you, which counts in your favour. To combat what you see as potential boredom: 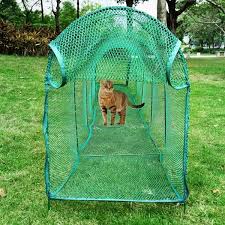 Ultimately, the best way to get a cat to cuddle with you, is to sit still or lie down. Cats will come to people when they are quiet and don't move. Mine seem to enjoy it most when I am trying to use a computer. When you are totally ignoring them and are focused on something, how often will they try to intercept the object of your attention! A bit of humour, but some truth.

I'd try Kai's suggestions. I hope he becomes more smoochy.

I adopted a cat, Ms. Nibbles, that had not been socialized very much as a kitten. She enjoyed play, but seemed unreceptive of 'hands on' interactions.

I had a hairbrush of the sort used with blow-dryers, the kind having relatively few stiff bristles, each capped in a small sphere. Miss Nibbles enjoyed being brush with this, so each day I would geantly brush her, every once in a while allowing the edge of my hand to drag along with the brush. Over time, and as she became more receptive of them, these hand-strokes became more common. She was never a cat to put up with extended petting, but short petting sessions became just fine. The important thing is that these brushing/petting interactions were frequent (at least a couple times each day) and I never -forced- her to be petted. I always desisted the moment she showed any sign of enough. The cat told me how much was OK.

I took a similar approach to, and ultimately achieved even greater success with winning her over to being carried. I starting with very short lifts, where I set her down almost instantly, each lift ending in something she really enjoyed such as being placed next to a dab of wet food (or catnip), lifted to a sunny windowsill, or placed next to a favorite toy for play time. As she came to realize that EVERY TIME she was picked up it would end in something she loved, she grew increasingly tolerant of it. Yes it took time, but eventually one of her favorite activities as an elderly cat was to go 'exploring' with me, where I would carry her from cupboard to cupboard, opening the doors and letting her inspect the things inside. She would lay in my arms just peering and purring, purring and peering. Miss Nibbles died of cancer a few years ago, but as I describe these activities it is surprising me how much I miss her still. She was such a good cat.

Every cat is different and I can't promise that this approach will work for you. All that I can say is that it worked for me and that I hope the same for you. Cheers.

Stepped on my kitten’s paw

Feral cat keeps attacking my dog in our backyard, what should I do?

Why do my dog’s ears feel warm?

Is it normal for rabbits to always act like they’re hungry when presented with a new batch of hay/pellets/greens?

Is there a “shock collar” that doesn’t actually shock the pet, but instead just makes loud noises?

What could happen if my 3 year old boxer does not reproduce?

What happened to my leopard gecko? Is aspen bedding good for him?

Cat has a wound behind ear

How to siphon a pond?

Are there any species of turtles that won’t eat fish?

Can I feed very soft cooked bones to cats and dogs?

Why do cats have whiskers?

Do all koi have the potential to grow to 3 feet long?

How can I get my rabbit to eat different greens?

Both cats “yowling” in a specific location of the home

New GloFish are staying at top and sides of tank, not swimming around

I need help in neighborhood dispute about feeding a stray cat

Cat is having a freakout, what is wrong with her?