Can "nothing" have size?

Philosophy Asked by takintoolong on November 2, 2020

Edit:
The answer explained quite well below by more than one person is that there is no such thing as “nothing”. I gave the check to the explanation that I thought was more clear.

Is a vacuum nothing if that vacuum exists within the bounds of spacetime? Check out "Raum und Zeit" by Minkowski. This secondary article might also come in handy.

For an empirical explanation of nothing: https://phys.org/news/2014-08-what-is-nothing.html

Even if you could remove all the particles, shield against all electric and magnetic fields, your box would still contain gravity, because gravity can never be shielded or cancelled out. Gravity doesn't go away, and it's always attractive, so you can't do anything to block it. In Newton's physics that's because it is a force, but in general relativity space and time are gravity

So, imagine if you could remove all particles, energy, gravity… everything from a system. You'd be left with a true vacuum. Even at its lowest energy level, there are fluctuations in the quantum vacuum of the Universe. There are quantum particles popping into and out of existence throughout the Universe. There's nothing, then pop, something, and then the particles collide and you're left with nothing again. And so, even if you could remove everything from the Universe, you'd still be left with these quantum fluctuations embedded in spacetime.

...and in that sense you are asking "can not-spacetime have spacetime?" Inasmuch an answer of yes would mean "A is not-A." This contradicts the principle of non-contradiction. That "spacetime is not-spacetime" is false is axiomatic. This, of course, also implies that all of spacetime cannot be bound by not-spacetime. In either instance, by which empirical means and deductions might we empirically verify whether or not the world even ends? For all we do know between blinkering quantum decoherence and the event horizons of epistemically opaque cosmological wholes ("Black Holes") we simply do not know how the world started or whenwhen / if it ends.

"People say again and again that philosophy doesn't really progress, that we are still occupied with the same philosophical problems as were the Greeks. But the people who say this don't understand why it has to be so. It is because our language has remained the same and keeps seducing us into asking the same questions. As long as there continues to be a verb 'to be' that looks as if it functions in the same way as 'to eat' and 'to drink', as long as we have the adjectives 'identical', 'true', 'false', 'possible', as long as we continue to talk of a river of time, of an expanse of space, etc. etc., people will keep stumbling over the same puzzling difficulties and find themselves staring at something which no explanation seems capable of clearing up. And what's more, this satisfies a longing for transcendence, because in so far as people think they see the 'limits of human understanding', they believe of course that they can see beyond these."
-Ludwig Wittgenstein
"Culture and Value"
pg. 15e c.1931

That said, sure, in a metaphorical sense nothing can have a size as in "look at all that nothing." 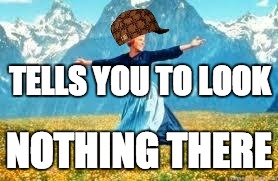 ...but, as you nicely put it in your comment, like a mathematical point, or, like a Euclidian circle, "nothing" is just an abstraction and like all abstract ideas, nothing does not exist - it is only to be found in language.

A lot of confuse concepts. I will try to answer your question excluding all considerations about the transcendental idealism producing space, but you should read about it.

The nothingness is not an object that exists outside of a mind. It can be said to be an ideal concept (more precisely, a synthetic-a-priori concept, equivalent to the number zero in math, read the introduction to Kant's Critique of Pure Reason). As such, it can't be closed inside a box. A box is a product of sense perception, and you can't put ideas inside. Notice the types of both objects: one is ideal, is not the result of sense perception, the other is the result of experience.

The concepts nothingness and nothing (equivalents in this particular case) mean the absence of things. Given that you can only measure things, you can't measure an absence of things. Nothing is a group which has no elements, and therefore it cannot have a size (which is different from having size 0).

Worst even, you cannot imagine nothing, except as an empty container. What you are precisely trying to measure is the container, not the content, since you can't measure something that does not exist. Imagine nothing without a container: you can't.

In physics, the concepts of nothing and nothingness refer to a space where there are no objects we can interact with (i.e. no atoms), but where there would exist objects we can't interact with (e.g. gravity fields). Black matter is a conceptual object that would exist in a perfect vacuum. You can perform ideal measurements of it, but only as a concept containing something, not as an unexisting content.

Under such light, the answer to your question "does 'nothing' have size?" is clear: no. It can't have a size. Only things have sizes. In order to measure the nothingness, you need to exclude the idea of the container, and measure what lefts.

Answered by RodolfoAP on November 2, 2020

Indeed it's a brilliant question!! First, we need to understand what is Existence, as asked in question the term 'nothing' is actually 'Spatial expanse of Existence'

Existence: It includes universe/multiverse/entire creation, it can be defined as a self-existing multi-dimensional entity, infinite in nature, it consists of all other entities that ever existed or existing now or will exist; such as matter, antimatter, waves, energy, force fields, spatial expanse (includes emptiness and non-emptiness) etc.

Non-Existence: It can be defined as an entity that never existed, nor existing now and will never exist.

There is a theory of the presence of dark matter (never been detected directly) in the emptiness of our universe due to which our universe is expanding exponentially. It might be possible that our universe is just getting absorbed into the vast infinite spatial expanse of Existence. (The detailed discussion of this topic has not been included in this book as it is a full research topic to cover).

By the above definitions, now we can have a better understanding of Existence, Non-Existence and Spatial expanse of Existence.

There is always a continuous change of state of Existence can be explained by two theories i.e. Second law of thermodynamics and Moment of inertia. However, both might not be able to explain it fully.

Answered by Harjeet Singh on November 2, 2020

Is 'nothing' encapsulated by 'something'

Nothing in its elemental notion is exactly that: no thing - no determinate or indeterminate thing. This was originally an insight of Parmenides in the very early theorisation of what it means for things to actually be and what their nature actually is.

In that sense there is nothing to measure because there is literally nothing there including space and time which is the stage upon where things are.

Generally noticing this in the ontological sense is just called the void.

Aristotle gave five arguments for the non-existence of the void and argued that the void of the atomists was better conceptualised as space.

Newton conceptualised space as infinite in extent and it's only with the advent of General Relativity that it was realised that space itself can have size.

There is an easy intuitive argument that shows space ought to have size - essentially because actual infinities are not physically realisable and when it's understood that space is ontologically real.

Once you have understood this then your specific questions are easy enough to answer (though to be honest, relatively unimportant in the order of things).

Answered by Mozibur Ullah on November 2, 2020

In physics there is a differentiation made between "vacuum" and "void". From an article entitled "How Feynman Diagrams Almost Saved Space" by theoretical physicist Frank Wilczek:

Vacuum, in modern usage, is what you get when you remove everything that you can, whether practically or in principle. We say a region of space “realizes vacuum” if it is free of all the different kinds of particles and radiation we know about (including, for this purpose, dark matter — which we know about in a general way, though not in detail). Alternatively, vacuum is the state of minimum energy.

Intergalactic space is a good approximation to a vacuum.

Void, on the other hand, is a theoretical idealization. It means nothingness: space without independent properties, whose only role, we might say, is to keep everything from happening in the same place. Void gives particles addresses, nothing more.

In this view, vacuum refers to an actual region of spacetime. Remember that quantum field theory tells us that there are fields that exist all throughout the universe. Even if you remove particles from a region of spacetime the fields themselves still exist in those points, they are just in a minimum energy state so there is no actual particle or radiation in that space. If you were to put a field vacuum inside of a box (build a box around a particular region of vacuous spacetime?) then that region would still have a dimension of length, because it is still spacetime that is permeated with minimum energy field vacua.

On the other hand, a void is the idea of a region of space and nothing else. It doesn't have minimum energy field vacua, it doesn't even have a time component. It is the abstract concept of just having a region of space. If you were to have a box that had a void inside of it it would still have a length because it is the definitional concept of space. From Wikipedia:

Space is the boundless three-dimensional extent in which objects and events have relative position and direction.

Even in a void, a theoretical region of space that has nothing inside of it, it still has spatial dimensionality because it is, by definition, space.

A third concept, the concept that you are most likely meaning to refer to, is the idea of an absolute nothingness. Nothingness, or emptiness, is what is called a universal, or an abstract concept. There isn't a region of the universe you could go to that would contain nothingness because all regions of the universe have spatio-temporal dimensionality. So you wouldn't ever be able to find a region of actual "nothingness" to enclose. However, that brings up the problem of universals vs particulars, or even just abstract objects in general. Here are two introductory resources that will help you get a better understanding of the subjects: Properties and Abstract Objects. It is not a closed debate about whether or not universals, such as "nothingness", or abstract objects in general exist. There are good arguments on both sides and this is a question that has been discussed at the forefront of western philosophy since Plato and Aristotle. Whether or not "nothingness' as a universal exists, you still would not be able to encapsulate it within a box. As for vacua and voids, however, both of those do have dimensionality because both of them are bounded by spatial dimensions.

Where did Aristotle say that the more self-evident something is, the more difficult it is to see?

In the philosophy of Josiah Royce, is there a tension between the individual and society?

Are there ethicists who defend the conclusion that “harm” be defined by the individual being harmed?

How can an uneducated but rational person differentiate between science and religion?

Can “nothing” have size?

Which aspects of consciousness are most often addressed by philosophers of mind?

The joy of resolving a philosophical doubt

What is going on with Russell’s “beauty cold and austere” of mathematics?

Can one prove a negative existential claim?

What are the common Arguments for idealism within indian idealist schools like pratabhijna or yogachara?