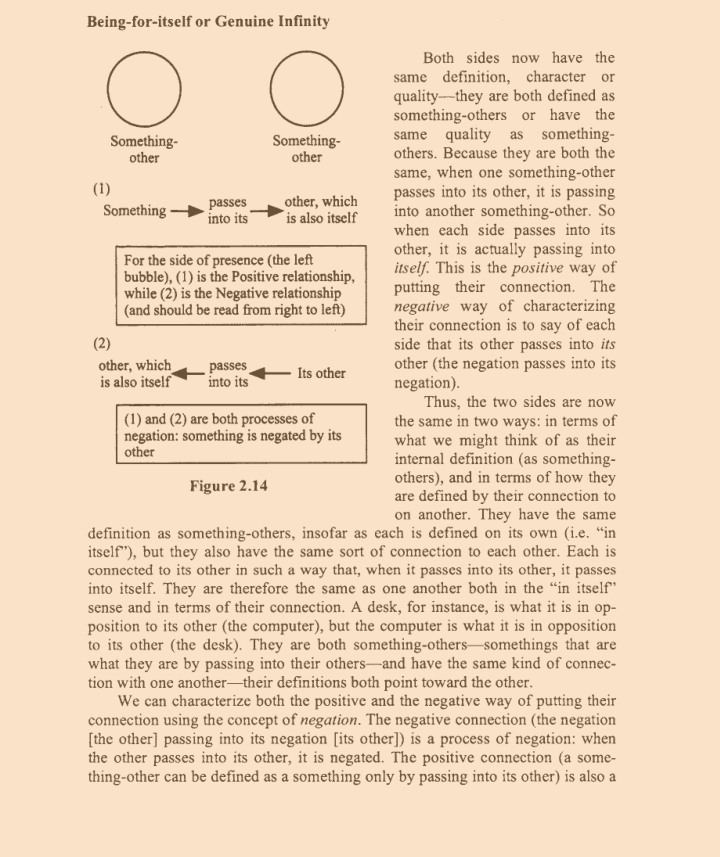 I have no idea what’s going on here.
As I try to understand it:

The positive connection (the being side) is:

Something-Other passes into Itself (which is an Other of it).

The negative side (the nothing side) is:

Other passes into Something-Other (which is itself)

Julie Maybee's "Picturing Hegel: An Illustrated Guide to Hegel's Encyclopaedia Logic" is indeed a nice choice to initiate oneself into Hegelian dialectics. Her article at https://plato.stanford.edu/entries/hegel-dialectics/ is even clearer in some respects, as though some complicated data are presented in a chart or table.

I surmise that an enjoyable and efficient way to grasp Hegel's writings on dialectics is to read them as a narrative of thought-experiments involving instabilities stemming from indeterminateness and stabilities gained by determination evolving one after another (at this point, it may be helpful to evoke Aristotle's criticism of apeiron and the etymology of the word 'definition', in brief: If something is left unbounded, then it is not properly defined and it is imperfect).

Imagine that there is someone like Dr Jekyll and Mr Hyde, Mr. Hyde being an abstract self possessing merely the possibilities just the current stage makes available and persistently seeks definite answers to the questions "who am I?" or "who are you?", while Dr. Jekyll (the philosopher) has been recording Mr. Hyde's attempts.

As a warm-up exercise to get familiar with what Hegel tackles in these early stages, I would recommend Max Black's colourful dialogue "The Identity of Indiscernibles" (Mind 61, pp. 153-164, 1952).

On which frames is the modal system KW valid?

Name of argumentation in a discussion

How were formal systems and notion syntactic consequence (proof) developed?

What does Foucault mean by “boomerang”?

How could I possibly apply rule-utilitarianism in real life?

Is Nietzsche’s goal — for the “overman” and “higher type” — just ‘forgetfulness’?

What is meant by “assume P”?

Does this reformulation of the the analytic / synthetic distinction overcome Quine’s objections?

Is the Münchhausen trilemma really a trilemma?

Arguments for Denying Prisoners the Right to Vote

Aren’t we most likely subject to artificial selection?

Is mathematics truth? As in the sense of that which is manifest or possible in reality?

How can a stream of thoughts and perceptions have freewill?

Confusion about how the many worlds interpretation denies the measurement?

What does Nietzsche mean by the words ‘counterfeiting the world by means of numbers?’

In what contexts or disciplines does “One may assume X” imply “One may ignore the possibility of any statement contrary to X being true”?

Is the truth table method for valuating 0th order sentences not a proof system in its own right?

What is the relationship between the primitive notion and a priori?