A question about Quantum entanglement, 45° Light Polarization, and faster than light communications

I recently read "Atomic Adventures" by James Mahaffey. In the book (Chapter 10) he mentioned a theoretical way of faster-than-light communication. My brain instantly searched for flaws in the proposed system but I couldn’t find any, I’m sure there is a reason but I just haven’t thought of it yet. It would be very helpful to me if one of you could help me especially because I couldn’t find any real information on the proposed system. (And I’m only in High School so there could just be a gap in my knowledge that would explain why this isn’t possible very easily)

Here a description (edited for clarity):
A source of entangled photons is placed half-way (slightly closer to the Sender) between the two points you want to communicate. One of the entangled photons is sent to the sender and the other one to the receiver. Before the Photons leave the source they’re passed through a Polarization filter (Vertical) but only if they’re going to the sender. The Sender has a Polarization filter on his end that can be at a 0° (Vertical)(Not changing anything) or be at a 45° angle relative to the vertical polarization and erase the Vertical/Horizontal polarization. The receiver has a 90° (Horizontal) Polarization filter before a detector. Since the photons are entangled if the 45° polarisation filter is in place ca. 25% of photons should go through the filter and if it isn’t 50% should. You can now assign the values a digital 1 and 0 and you have FTL communications.

2nd addition: So I found a diagram of the System published with the audiobook on audible. However, I have concluded that the System as shown wouldn’t work since the entanglement is destroyed at the first polarization filter. If anyone disagrees please answer below, otherwise, I will close my question in 24h. 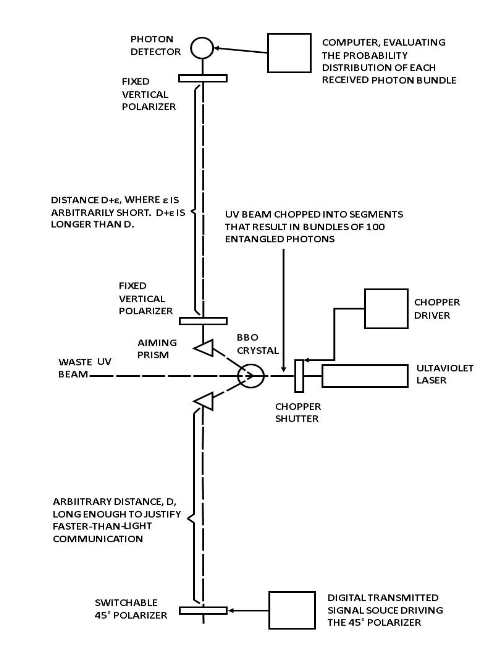 Let’s say the initial entangled state is $big(|HVrangle+|VHranglebig)/sqrt2$ where H means horizontally polarised and V means vertically, and the place value notation is implicit to first entry being sender and second entry being receiver.

When the sender’s side photon passes through the initial vertical polariser the state is no longer in superposition and is updated to $|VHrangle$.

As you can see, regardless of the later polarisation setting of the sender, the receiver always receives a horizontally polarised photon.

Before the Photons leave the source they're passed through a Polarization filter (Vertical).

Now the pair is in the state VV, which is not entangled. If the Sender polarizes vertically, they remain in the state VV. If he polarizes at 45 degrees, they collapse to one of the two states (V+H)V or (V-H)V. Either way, nothing makes it through the horizontal polarizer.

Might we deduce the masses of standard model fermions from symmetry principles alone?

Can Alcubierre Space Drive function in space time within event horizon of a Black Hole?

Clarification regarding the molecular nature of friction described by Amonton’s laws?

Nilpotency of BRST operator in gravity

Band structure of the Hubbard model

Why are coherent states of harmonic oscillators called “coherent”?

Confusion in equation of integration and differentiation for motion?

Can you explain the direction of angular displacement?

Question on Ampere’s Law and Solenoid

Can the work in a isochoric process be non-zero?

Universe with only exactly two charges of the same sign

Equation of motion of harmonic oscillator with dissipation function of speed

Is there any relativistic constraint on the rate of change of a scalar field?

Generate a sonic boom from a stationary device