Why do we multiply a $frac{1}{r}$ factor for the gradient unit vector in $vec{theta}$ direction? and how is the angle a vector here?

the components of the vector $vec{R}$ given with polar coordinates are:

you can write the vector R in coordinates $quad hat{vec{e}_r},,hat{vec{e}_phi}quad$ system

The transformation matrix between those two coordinate system is:

The position vector (or the radius vector) is a vector R that represents the position of points in the Euclidean space with respect to an arbitrarily selected point O, known as the origin. We can parameterize this position vector as a function of coordinates and define basis vectors using it. In polar coordinates, it is a function of $r$ and $ theta$, where $r$ is the radial distance from a chosen origin and $theta$, is the angle which the radial distance from the arbitrarily chosen origin makes with a line. 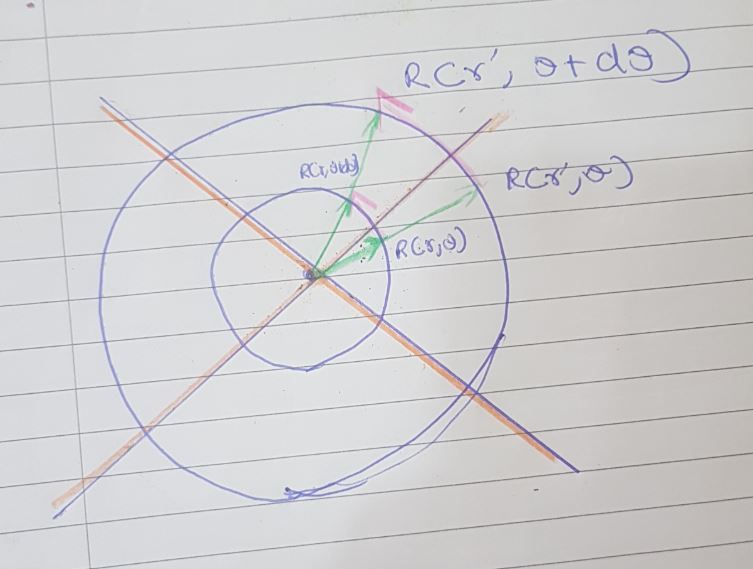 Consider taking the partial of $ R$ w.r.t $ theta$ when the radial distance is some $r$ away, you get:

But if you did this at some other $r'$ distance away with $ r'>r$, your basis vector scales up by some factor. Most precisely, the basis evaluated on the unit circle scales up linearly scales a factor of $r$ as we move outwards from the origin and hence the unit polar basis vector at some radial distance is given as:

The overline stands for the vector being normalized

How deep would a moonbase have to be dug for radiation protection?

How much the Earth atmosphere oscillates due to Moon tidal force and does this produces winds?

Diagonalizing a constant metric tensor $g_{munu}$ at a point

With a machete, why is a diagonal cut more effective than a right angle one?

Why do 2 solenoids attract each other?

Two observers initially at rest in the expanding Universe

Computing divergence of gradient in a field with measured velocity vectors

What is the effect of radius in a planet’s steady state temperature?

Demonstration that electric current at equilibrium is zero in crystals

Does Hubble’s constant apply to galaxies that are blue-shifted/ moving towards us? Another question