Physics Asked by lightweaver on September 29, 2020

My textbook (University Physics by Young and Freedman, 13E) showed that if a ball rolled down an inclined plane, friction would point uphill. Below are the relevant diagrams: 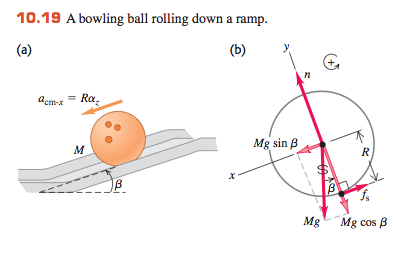 It then says that “If the ball were rolling uphill without slipping, the force of friction would still be directed uphill.” I’m presuming that the ball spins with clockwise rotation looking from the side. By this token, friction will point upward along the incline because friction resists motion and will exert a torque about the center of mass that counters the clockwise rotation.

However, the ball is also translating uphill, and shouldn’t friction want to counter that translation by pointing downhill? How do I know which type of motion friction wants to oppose?

And also, I had assumed that the ball was rolling with clockwise rotation. What if it’s counterclockwise? In that case, friction would point downhill, would it not? Yet my book seems to imply that friction will point up no matter which direction the ball rotates in.

I think it can be explained more simply.... going uphill, ball is rolling cw, the net torque needs to be ccw to "decelerate" the ball. Static friction is providing the only torque through the cm of the ball and therefore must be directed up the ramp.

These two effects produce a convergent result - the no slip condition.

Going up the hill the situation is similar except this time the frictional force is trying to decrease the linear acceleration up the slope whilst reducing the angular speed about the centre of mass to maintain the no slip condition.
To appreciate what is happening in this case just imagine what would happen if a ball spinning clockwise was placed on the track.
The frictional force would have to accelerate the ball up the slope whilst slowing down its speed of rotation.
Eventually the no slip condition is reached and then the frictional force is there to maintain that condition of no relative movement between the slope and the ball.

So in each case what the frictional force does is to try and get to a no slip condition (no relative movement between the ball and the slope) and then maintain that condition.

Rigidity Vs. Viscosity and Bulk modulus

How to explain time dilation without light clock

Is the wavefunction of particles inside a gas spread or localized?

Can a mathematical proof replace experimentation?

How a photon choose a geodesic?

How come Chargers are so safe?

How does doping affect the color of a semiconductor?

How can we be sure, that the dot-product of the four-vectors $U$ and $A$ in special relativity is zero?

Working with the definition of periodic function

Can the arc from a Tesla coil or plasma from a high powered plasma orb be redirected with an electromagnet?

Is an optical stack-up possible that can allow visible light to pass through but NIR light to get doubled/up-converted and reflected?

How the bubble size in a champagne bottle evolve?

Why is there no acceleration involved when electron moves in resonant debroglie wave lengths?

What is the magnitude of the curl of a electric field? and in general from a vectorial field?

How hard do I need to cycle to simulate the effort of this hill climb?

What if a body Accelerate non-uniformly?

Which area and length is the one used in equation of Youngs modulus?