Let’s say we have two point charges q1 and q2 both of which are positive, according to Newton’s third law the force one exerts on the othe is equal to the force the other exerts on the first. Therefore

Now let’s say that we have two concentric spheres both of which are infinitely thin and have a positive charge: 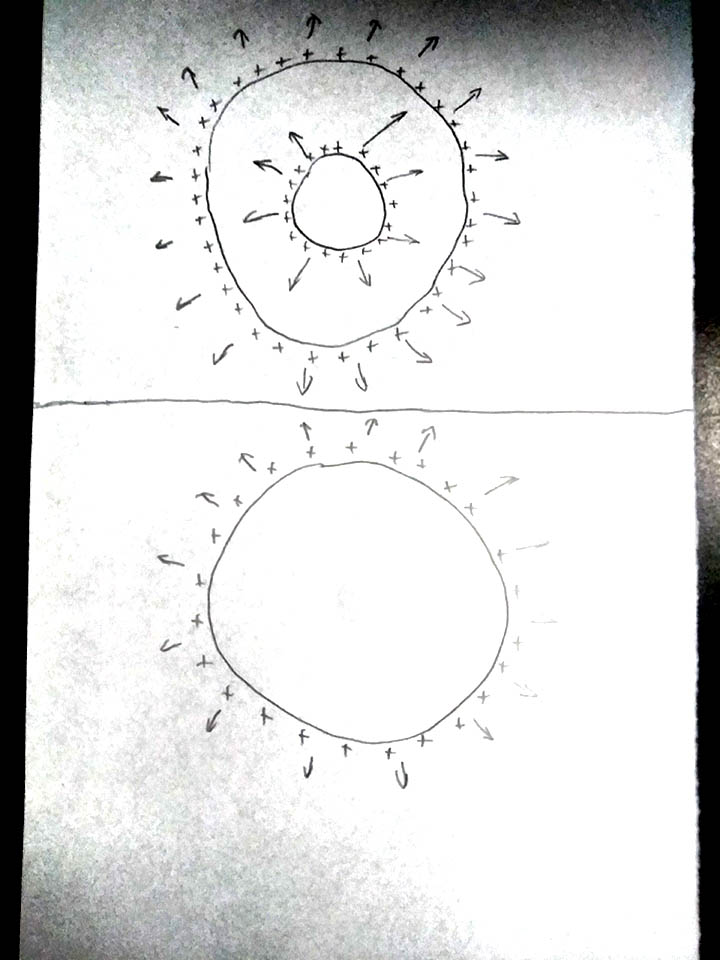 The force of the charges from sphere 1 acting on sphere 2 is:

while the force of the charges from sphere 2 acting on sphere 1 is:

However the electric field from sphere 2 is zero everywhere inside itself.

how is newton's third law obayed if the outer sphere doesn't push back?

Newton’s 3rd law is obeyed in many different but equivalent ways.

First, if we consider the spheres as a whole the net force on the outer sphere is zero since the force is constant and radially outward and the force on the inner sphere is also zero. Clearly $0=-0$. So overall, as an entire object Newton’s 3rd law holds.

Finally, consider one charge on the inner sphere and the entire outer sphere. The net force on the inner charge is zero by Newton’s shell theorem, and it turns out that the net force on the shell is also zero. The part of the outer shell that the inner charge is closest to has the strongest force, but there is more charge further away. Over the entire shell the force again integrates to 0. So for every possible combination of charges, Newton’s 3rd law holds.

You are simplifying things too much here. To calculate the force sphere 1 exerts on sphere 2 you can't just do $F=qE$ because we are dealing with vectors here. In general, you will need to do an integral (sum) of all of the vector forces over sphere 2 due to all of the charges on sphere 1, and you will find that everything cancels out for the same reason that there is no net field from sphere 2 inside of sphere 2. Newton's laws still hold here.

If the spheres are concentric then you can also use a symmetry argument. The field will be constant in magnitude across sphere 2, and each point on sphere 2 will have a point on the opposite side of the sphere where the field points in the opposite direction. Therefore, everything cancels out.

Remember, electric fields follow the law of linear superposition, so since Coulomb's law for point charges follows Newton's third law, we are always guaranteed that it will also hold for electrostatic interactions of systems of many charges as well.

Answered by BioPhysicist on November 23, 2020

How to Determine the Angle Between Normal and Full Acceleration of a Body?

Difference between field and wavefunction

Are there galaxies with satellites in retrograde orbit?

Is the number of rays projected by a source of light finite?

Why is measuring $M$ equivalent to measuring $UMU^{-1}$ after applying $U$?

Physically, why is the ground state wavefunction of Neon be spherically symmetric?

Energy of the system after displacement

Why water heat capacity has minimum at body temperature?

How would this multibody system rotate in free space?

Why doesn’t the classical model of electrical conduction work with iron, cadmium and bismuth?

What is this notation with an un-sandwiched comma in the subscript?

What is the formula for ripple voltage in integrating circuit?

Will the Average Kinetic Energy of ejected Electrons in Photo electric effect change with Intensity of Radiation?

Why Uniqueness Explains Method Of Images