In a hypothetical ring-like space station, would an astronaut feel a centripetal force? 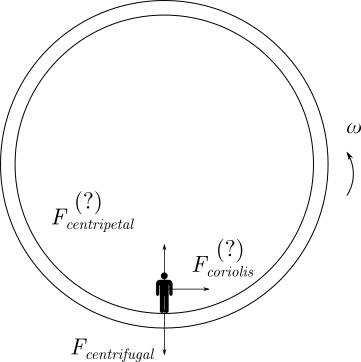 The key to understanding these things is the centrifugal effects are a pseudo-force, not a force.

In the case of your space station, the astronaut could view their world in a cartesian environment, where the floor is moving underneath their feet and they are constantly colliding with it while moving along with it. However, this is not a natural view. Its much easier on our minds to think of the ground as "holding still."

For the ground to "hold still", that means we should be thinking in a frame where its motion is 0. A rotating frame that rotates at the same rate as the space station meets that need. So if we reframe the motion, and put it in terms of this rotating frame, we get the ground "holding still" and it makes sense to us.

Now the motion is still the motion. It shouldn't matter how we calculated it. It still has to be the same motion. If you run the numbers to see what your equations of motion in this rotating frame must look like, you notice a peculiarity. The equations of motion in this frame are exactly the same as the nice easy Newtonian inertial equations you got to use in the fixed cartesian frame, except they have additional terms. There is a $-Omega times (Omega times r)$ term and a $-2Omega times v_r$ term. This is not to say things are moving any different. It says that if you want to view the motion in a rotating frame, these terms must arise to keep the motion consistent with the equations that came up in the inertial frame. They aren't forces, they are mathematical artifacts that arise from viewing the world a rotating way.

While the equations of motion are simplest in inertial form, we often choose to operate in rotating frames. On a space station, its easier to plan to walk 10 steps forward on a "solid" floor to reach your desk than to try to solve an orbital problem of trying to collide with the desk 2/3 of a rotation around the station. So we do all of our planning in a rotating frame.

But by thinking in a rotating frame, we must be ready for the centrifugal and Coriolis effects to appear. They aren't real forces, but they look and feel like them. The best way to prepare for them is to find a counter-force. For example, the centrifugal acceleration is counterbalanced by a centripetal normal force of your feet pushing against the floor.

So to answer your question directly, whether or not the astronaut feels a "centrifugal force" is not based on where the astronaut is, but on how we are thinking about the problem. If we are trying to make sense of the motion in a rotating frame, then there will be centrifugal and Coreolis effects. If we are thinking about it in a nice easy cartesian frame, there will be none. Its just a relabeling thing. In the rotating frame, you have a centrifugal effect driving you against the floor, and your momentum is zero. In the cartesian frame, you have no centrifugal effect, but you have a non-zero momentum and its driving you against the floor. In both cases, you feel the force of the floor. Its just a different way of thinking about why things move that way.

Generally speaking human beings think as if the ground below them is solid, because that's true 99% of the time. So we probably will think in rotating frames on a space station. However, if you were a professional basketball player who played basketball on such a station, there's a decent chance that you'd start to see the simplest path the ball can take, and might actually observe the players (and the court) rotating on the station while the ball moves in a straight line. Our brains are amazing things!

The only real force acting on the astronaut is the centripetal force (leaving aside gravity, but if we assume the space station and everything in it is in free fall then we can ignore gravity).

However, if the astronaut releases an object then it “falls” to the floor in the rotating reference frame of the space station. The astronaut attributes this motion to a radially outward force called centrifugal force. In fact, there is no force acting on the “falling” object at all - it is moving in a straight line with constant speed, and it is the floor of the space station that is accelerating to intercept the object. The object only appears to be falling relative to the space station.

When the astronaut observes the object carefully she sees that it does not fall straight down relative to the space station, but follows a slightly curved path. She attributes this deviation from a straight line to another force - Coriolis force - that acts at right angles to the object’s velocity. Once again, this is not a real force - it is purely an artifact of measuring the object’s motion relative to a rotating reference frame.

Why don’t we consider the reduce cross-sectional area while calculating stress in a metallic wire?

Why does ice fragment vertically?

Energy stored in an Inductor is used to move electrons

Maximum distance a mass falls on a spring before reversing?

Is there any meaning of tensor contraction?

Restrictions on Initial Values for the first derivatives of a wavefunction, for a bound state in the time independent Schrödinger Equation?

Frequency of vibrations of a clamped metal rod

How can a bicycle keep its momentum while changing direction?

Understanding Spin, (from Griffiths), a Paradox?

Does Bohr van Leeuwen theorem not exclude the possibility of explaining paramagnetism classically?

Can we make a machine that create same amount of positive and negative energy?

How small can a flame get?