In Newtonian mechanics, does the motion of an object change its weight (as opposed to mass)?

A wedge of mass $M$ is kept on a spring balance. A small block of mass $m$ can move along the frictionless incline of the wedge. What is the reading of the balance while the block slides? Ignore the recoil of the wedge. 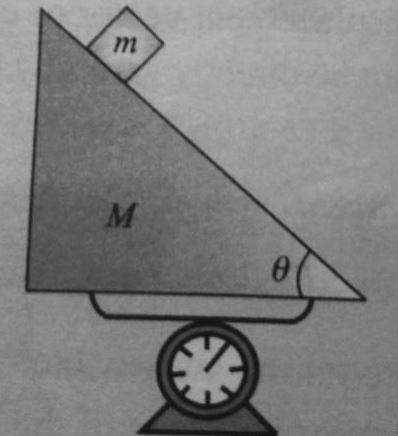 Supposedly the weight measured is different when the body is moving on top of the ramp but this makes no sense to me. How can the internal motion of a body change its weight reading? To attempt this problem I directly did $(m+M)g = W$ but that is wrong for some reason.

Scales don't measure weight, they just measure whatever force is being applied to them. For example if you pushed on a scale with your hand the scale is measuring the force exerted by your hand, not necessarily the weight of your hand (unless you were just resting your hand on the scale without any other forces acting on your hand).

So to adjust the question, we should be asking why does motion of block $m$ change the force acting on the scale as compared to if block $m$ was just sitting there? Well, the additional force acting on the scale has to come from the interaction between the block and the wedge. When the block is sliding (let's assume no friction) the force of interaction is perpendicular to the incline and has magnitude of $mgcostheta$. The downward component of this force is then $(mgcostheta)cdotcostheta=mgcos^2theta$, which is not $mg$ if $thetaneq 0$ (if we are limiting $theta$ to be between $0$ and $pi/2$).

However, if the block is at rest on the wedge, there has to be an additional interaction between the wedge and the block that has a component along the incline. This component acting on the wedge has magnitude of $mgsintheta$ acting down the incline. Therefore, the downward component of this is $(mgsintheta)cdotsintheta=mgsin^2theta$. And then we have the total downward interaction as $mgcos^2theta+mgsin^2theta=mg$, which is what we would expect for the mass at rest. 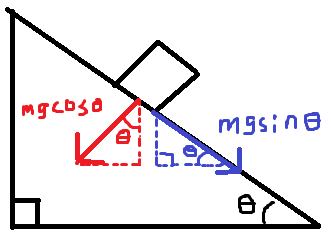 Therefore, the smaller force registered by the scale is due to the fact that sliding comes from a loss of interaction between the block and the wedge. Note that this doesn't mean that the mass sliding causes the scale reading to change. It is the "incomplete" interaction that causes it. For example, if the incline was frictionless but you (not attached to the wedge) were supporting the block so it didn't slide, then the scale reading would be less despite the block not sliding.

In other words, in your scenario the lack of interaction causes both the sliding and the change in scale reading. It isn't sliding $to$ lower scale reading.

Correct answer by BioPhysicist on December 12, 2020

In Newtonian mechanics, the weight of an object (defined as the force of gravity) depends only on its position relative to a large massive object (like the earth). The “effective weight” is given by the reading on a scale and can depend on the acceleration of the object. An astronaut in a current space station has an effective weight of zero because both he and the station have a centripetal acceleration toward the earth. In your problem, the force of gravity acting on the block has two components. One is parallel to the slanted surface and causes the acceleration of the block down the incline, but due to the lack of friction, it is not transmitted to the wedge. The other component is perpendicular to the surface and causes the block to exert a normal force on the surface. The vertical component of this normal force is transmitted to the scale and is interpreted as the effective weight of the block (after subtracting out the weight of the wedge).

A box sliding freely on an angle is only partially in freefall. The Mg component wouldn't change, so now the question becomes "what proportion of the box's weight is applying a downward force onto the larger incline?"

I think the bigger mass and the scale act as a system with the smaller mass and The scale should read $ (M+m{cos^2{theta}})g$,hence a constant value

Ohm’s Law gives me different values compared to the practical experiment with a multimeter – can you explain why?

What’s the Relation between Potential of mechanics and electricity?

What happens to flow in a constant area duct when there is a pressure gradient?

Why does the LASER beam quality factor (M^2) use squared value?

Why is $PV^{(gamma)}$ constant in an adiabatic process?

Some concepts of circular motion between man and the Earth？

Equations for the two-plane model of the greenhouse effect

What does it mean when we say “a blackbody is in thermal equilibrium with it’s surroundings”?

How to (hypothetically) calculate $tau$, the mean free time?

Can you take any symplectic 2-form into canonical form via a coordinate transformation?

Why is a vacuum balloon impossible?

Can the formula of buoyancy be used in this arrangement?

How can electromagnetic waves reach a cell phone in Faraday cage?