Physics Asked by ConfusedPleb on August 17, 2020

I’ve been working on numerically solving the Ising model in a study of phase transitions, but I’m having difficulty finding material to help me discuss the results. I’m studying spontaneous magnetisation.

Initially I thought spontaneous magnetisaion was a material randomly magnetising in a direction below the curie temperature, but from what I understand spontaneous magnetisation is just remenant magnetisation as an external field H -> 0 rather than a material randomly magnetising. Or is it both? What is the interpretation of the following images? An even spin distribution which becomes spin up (yellow) or spin down (blue) randomly below the curie temperature.

I have simulated the typical quantities eg susceptibility and have seen the critical exponent like behavior at the curie temperature, and also hysterisis at various temperatures showing no remenant magnetisation in the absence of external field.

The following simulations were just done out of interest with no real motivation. Are they physically meaningful as it’d be impossible to even obtain this initial configuration with an external field?

Thanks for your time

After each simulation the lattice was reset to the chequerboard configuration and the simulation was redone at a different temperature. 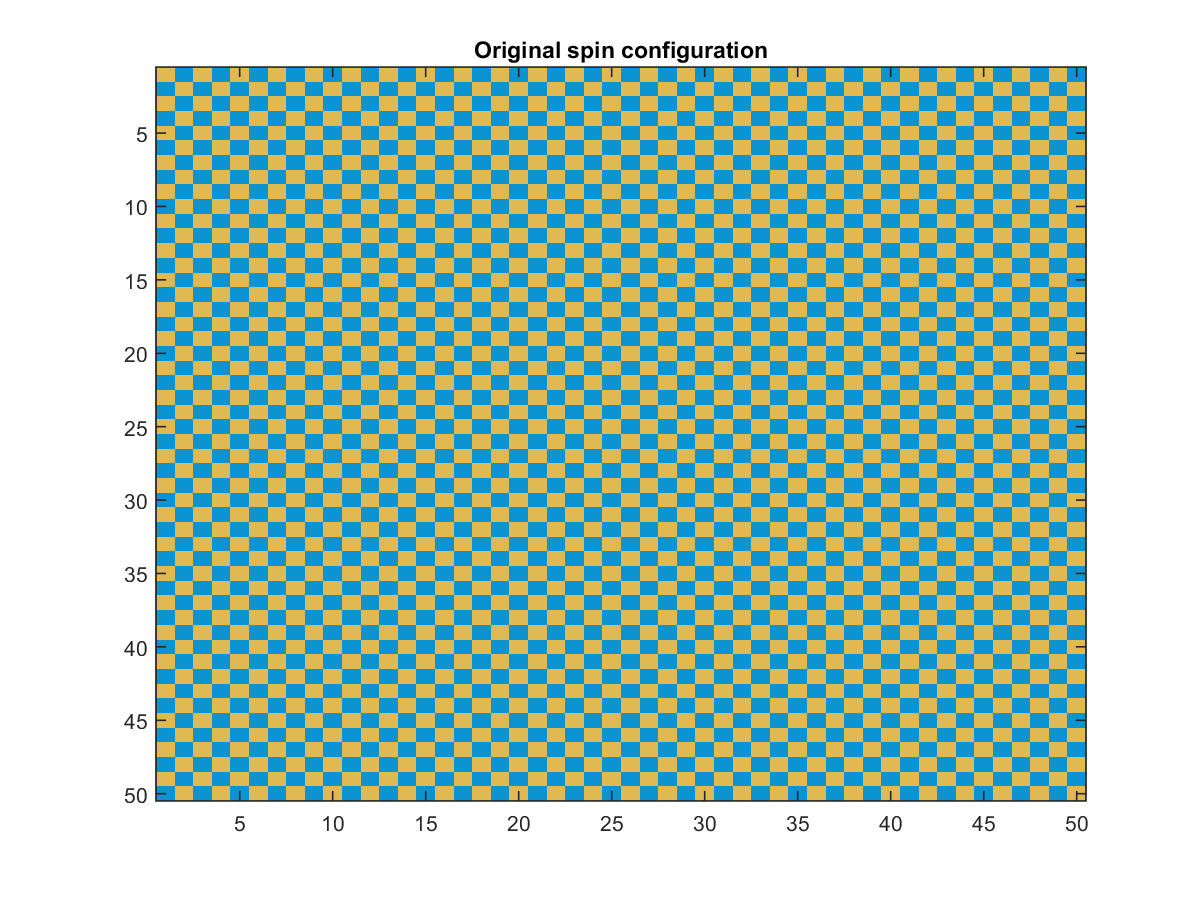 If you set the inverse temperature to a value $beta>beta_{rm c}$, and let your Markov chain runs for an "infinitely long time" (or use a perfect sampling algorithm), then you obtain a configuration exactly distributed according to the corresponding finite-volume Gibbs measure (with periodic boundary condition, I assume form your pictures).

In that case, one can prove that, indeed, with large probability (going to $1$ when the system's size grow), the resulting configuration will have an average magnetization $frac1Nsum_{i} sigma_i$ very close to $+m^*(beta)$ or $-m^*(beta)$ (both alternatives occurring with probability $1/2$), where $m^*(beta)>0$ is the spontaneous magnetization.

One can also show that if you do the same with a positive field $H>0$, then the resulting configuration will have (with high probability) an average magnetization close to $m(beta,H)>m^*(beta)$. Moreover, $lim_{Hdownarrow 0} m(beta,H) = m^*(beta)$.

All this was for the finite systems in your simulations. In infinite systems (the only ones undergoing a genuine phase transition), even after having specified the parameters (say, $beta$ and $H$ for the Ising model), there may still be infinitely many different Gibbs states that can describe it. This is due to the fact that several phases can occur for specific choices of $beta$ and $H$ (namely, when $beta>beta_{rm c}$ and $H=0$). Among all these Gibbs states, there are two that are physically most relevant; one will have an average magnetization equal to $+m^*(beta)$ with probability $1$, while the other one has an average magnetization equal to $-m^*(beta)$ with probability $1$.

The latter is completely analogous to what happens if you have a system of water molecules at 1 atmosphere and $100°$C. Then you don't know in which phase the system is from only this information: it may be liquid, it may be gaseous, or a mixture of both. You thus need different Gibbs states to describe these various possibilities.

The Hamiltonian has two global minima, corresponding to the spins all up or down, so you are equally likely to find the spins all up or all down below the Curie temperature, if you start with the checkerboard pattern and iterate the Metropolis algorithm.

It is not entirely clear from your question, but I gather this model does not include an external field in the Hamiltonian, in which case it is hardly surprising that you do see remnant magnetic field effects. Does that answer your question? If not you might want to clarify what you want to know.

Negative temperature of the de-Sitter horizon?

What is the physical explanation for Newton’s laws of cooling?

Atom flies into deep space. Will it radiate heat and stop eventually?

What is the physical meaning of the energy density of an electrostatic field?

Why does work depend on the path for some forces but not for others?

How would the existence of a magnetic monopole require the removal of world line from spacetime?

Describing the position of particles in QFT

How is the centripetal force of a car when turning distributed over the wheels?

Density of states for free electron confined to a volume

What is this one parameter subgroup of the Lie group Diff(R)?

What is the exact meaning of Lorentz invariance for a quantum scalar field?

What happens when there is wobbly motion in General Relativity

Why the Vout vs. VR graph looks like an oval loop?